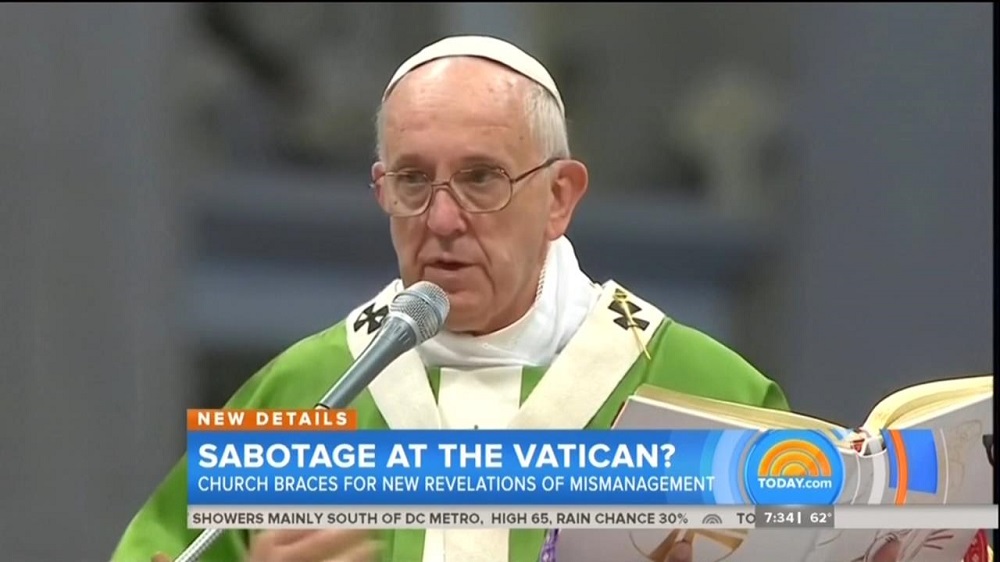 NBC's Today on Monday aired a sensationalistic report on the upcoming release of two books that are "exposing alleged corruption and infighting within the Catholic Church." Keir Simmons boosted a statement from one of the publishers involved, who claimed that "if the Vatican were a company they'd be in Chapter 11, and heads would be rolling from all the mistrust and financial abuses." Simmons also injected the political into his segment, underlining that "Pope Francis has introduced controversial changes opposed by some of the more conservative Church officials." [video below]

The following day, on Tuesday's CBS This Morning, Barry Petersen hyped how one of the authors, Gianluigi Nuzzi, labeled the alleged scandal as "a true battle between good and evil." Petersen asserted that Pope Francis's "efforts at reform may be helped by these revelations." He also touted "other allegations — one earth-shaking — that the alleged corruption at the Vatican was one of the main reasons Pope Benedict resigned."

NBC anchor Savannah Guthrie led into Simmons's report with the "exposing alleged corruption and infighting within the Catholic Church" line. The correspondent first wondered, "Is this part of a power struggle around the Pope?" He continued that "this appears to be a leak from inside the Vatican by someone, it seems, with an agenda."

Simmons then summarized the allegations from the two books:

KEIR SIMMONS (voice-over): 'Sabotage at the Vatican,' declared an Italian news magazine, as the pope braces for the publication of not one, but two damaging books. Merchants in the Temple is based on allegedly-leaked Vatican documents. Its author 'has uncovered the real inner workings at the Vatican,' publisher Henry Holt told Today in a statement. 'If the Vatican were a company they'd be in Chapter 11, and heads would be rolling from all the mistrust and financial abuses.'

Pope Francis has strongly spoken out against corruption. But before he became pope, a book published by the same author documented corruption and intrigue — a scandal that became known as 'Vatileaks' — and now, tensions over the direction of the Catholic Church are surfacing again — with many asking, why these leaks are appearing now?

PHILIP PULLELLA, REUTERS VATICAN CORRESPONDENT: But the fact is that the Pope has suffered from what one could call a series of unfortunate events.

SIMMONS: Pope Francis has introduced controversial changes opposed by some of the more conservative Church officials — making marriage annulment less bureaucratic; encouraging forgiveness for the sin of abortion; and declaring, 'If someone is gay and he searches for the Lord, who am I to judge?'

But this week's second book, Avarice: Wealth, Scandals, and Secrets of Francis's Church, is set to expose bitter internal battles over the future of the Church.

SIMMONS (on-camera): And that book, which will only be published in Italian, may also reveal details of Pope Benedict's resignation. The leaked documents are likely from the period before Pope Francis, but there will be some worried people in the Vatican until those books are published — which is later this week, guys.

It should be pointed out that back in March 2013, Today hyped Nuzzi's previous reporting on the "Vatileaks" controversy. Correspondent Richard Engel played up that the Italian journalist "exposed some of the Vatican's most guarded secrets. A scoop seen in Italy as big as Watergate."

On Tuesday's CBS This Morning, anchor Norah O'Donnell introduced Petersen's segment by noting that "the Vatican is criticizing newly-released claims of mismanagement and internal rebellion. Some Catholic insiders are accused of financial greed and waste; others are said to be blocking Pope Francis from making reforms. Two people are accused of leaking the evidence."

The CBS correspondent featured dissenting Catholic author Candida Moss of the University of Notre Dame during his report. Unsurprisingly, Moss sang the praises of the Pope:

BARRY PETERSEN: Good morning, Norah. Well, the center of the controversy is the most explosive of two books due out later this week. CBS News obtained a copy this morning, where author Gianluigi Nuzzi says — quote, 'This is a true battle between good and evil.' 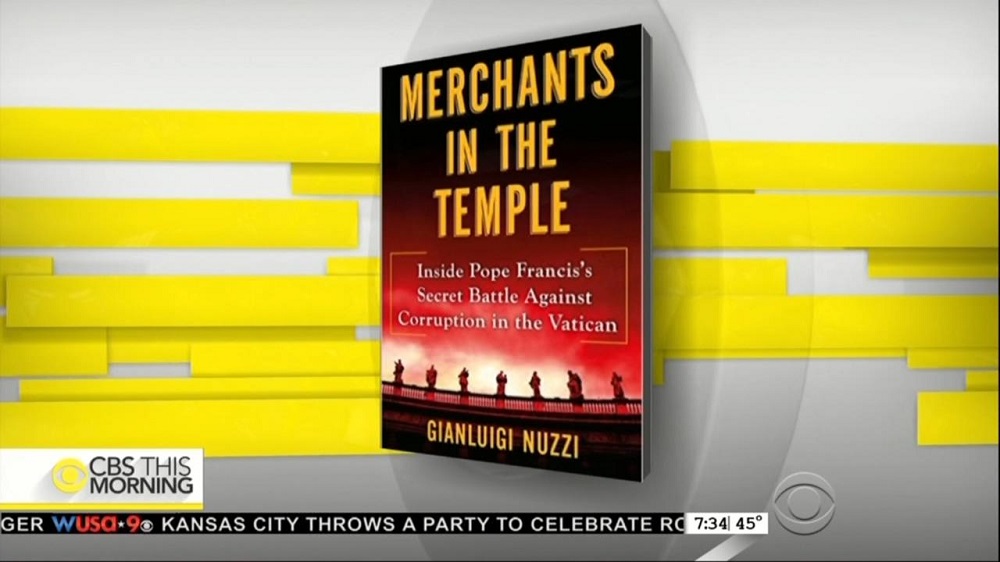 PETERSEN (voice-over): The book is titled, Merchants in the Temple — where Nuzzi says, 'The Pope's men are lined up on one side, while on the other are his enemies, the defenders of the status quo, adverse to any and all change.'

That change was started shortly after Pope Francis was elected. He set up a special commission to examine the Vatican's finances. The books claim the commission found numerous shortcomings and areas where there was virtually no accounting for how money was spent.

Nuzzi talks about how even the most sacred rituals are allegedly tainted by money — like, 'The procedures for beatification and canonization — a marketplace in which millions of dollars change hands.'

The Vatican's response to the books has been twofold: first, a statement attacking them as the fruit of a grave betrayal of the Pope's trust. And it arrested two people who are on the commission — one a priest, and the other a woman who is a public relations expert. They are accused of leaking the information on the commission — including actual recordings of the Pope at private meetings.

Candida Moss is professor of theology at the University of Notre Dame.

CANDIDA MOSS, NOTRE DAME THEOLOGY PROFESSOR: The fact that these arrests have come so close to the release of the books, sort of, indicates that we should see Francis as very much in line with everyone else in the Church. But the actual revelations themselves only promote him as someone who has been trying to change the atmosphere and culture at the Vatican.

PETERSEN: The second book, called Avarice, details a lavish lifestyle — like a $26,000 helicopter ride for the Vatican's then-secretary of state, later fired by the Pope — whose efforts at reform may be helped by these revelations.

MOSS: There must be a clean-up of Vatican finances. So, in a way, Pope Francis comes out looking really good.

PETERSEN (on-camera): There are other allegations — one earth-shaking — that the alleged corruption at the Vatican was one of the main reasons Pope Benedict resigned; the other sad, about Peter's Pence: $400,000 sent in by churches to help the poor. It allegedly went instead to pay for Vatican department office expenses.