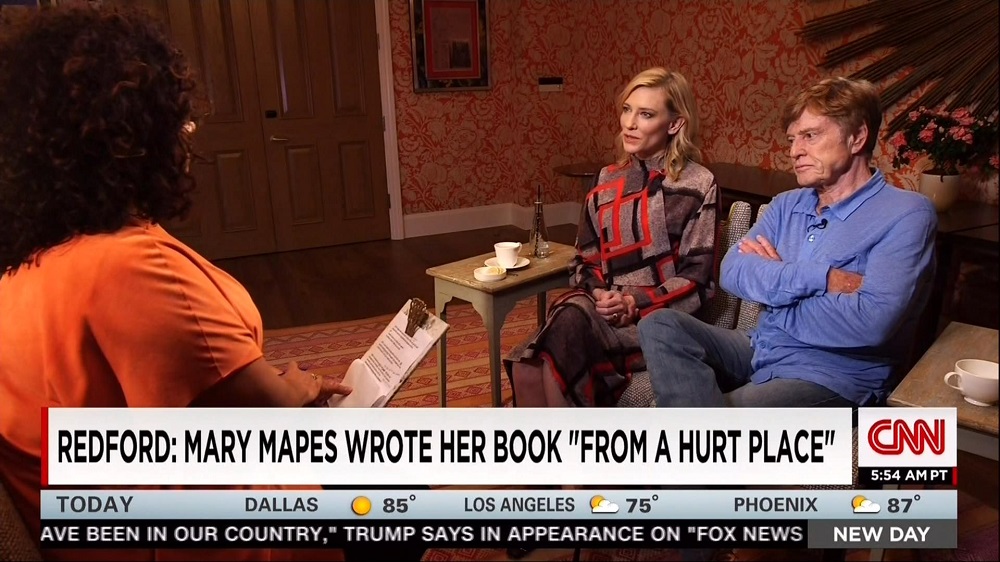 Robert Redford and Cate Blanchett gushed over disgraced journalists Dan Rather and Mary Mapes on Monday's New Day on CNN. Michaela Pereira interviewed the Oscar winners about their new film, Truth, which is adaptation of Mapes's account of the Memogate scandal. Redford underlined that the apparent loyalty between Rather and Mapes "made a big impression on me." Blanchett hyped that "they're both compelling, fascinating, vital, intelligent, hilarious people." [video below]

Pereira acknowledged during her lead-in for the pre-recorded segment that the scandal "rocked a powerhouse of broadcasting, and forever scarred a journalism giant. The 2004 60 Minutes II story called the National Guard service of George W. Bush into question. But the report ended up being based on forged documents." However, the anchor tossed softball questions at the two movie stars.

The CNN journalist noted that "2004 isn't a terribly long time ago — very controversial then; still now!" She asked, "Did that give you any hesitation; or did you say, no, I want to jump in with both feet?" Unsurprisingly, Blanchett and Redford gave their pro-Rather/Mapes spin in their answers:

ROBERT REDFORD, ACTOR, "TRUTH": REDFORD: No hesitation — it was a great story. It was a great story and a great script. I just remembered something that happened — open and shut. It happened, and it went away real fast. There didn't seem to be any playout. It just rose up and went away. And that's all I remember. And now, I think, what this script does — what this film does — is open that up to take a hard look at what the real story was — because I think the real story kind of got shut down.

BLANCHETT: But it's very easy to forget that where Dan Rather and Mary Mapes found themselves was in completely uncharted territory — that invisible commentary versus investigative journalism for journalists who had long and celebrated careers, and — and went through a process of due diligence. You know...all of that world was completely new. We take it for granted now.

Instead of bringing up the fact that the Memogate documents were forged, Pereira hinted that there was an ongoing bias against the two former CBS journalists:

MICHAELA PEREIRA: We do take it for granted. It's interesting, because when people see this film — because we know that there are people that already have their own opinions about what really went on with this story, right? Do either of you feel differently than you did going into it — now that you've done all your research for the film?

REDFORD: When I entered the project, I called Dan Rather; and I said, Dan, is there anything you want to tell me? And he said, yeah, Bob: it was about loyalty. He says my loyalty to Mary — it was an unbroken loyalty, and hers to me; and also, our joint loyalty to our bosses. That part got broken. So I think that's what this story is really about — going through the ups and downs of what they went through, what held them together was loyalty. And that made a big impression on me.

Later in the segment, the CNN anchor pointed out to Blanchett that "some of the criticism has surrounded the fact that this account is from Mary Mapes's version of how it played out. You brought in — so much powerfully — of her own story into this. What do you say to that?" Blanchett and Redford did their best to try to explain away the scandal:

BLANCHETT: I don't see my job as an actor to ask an audience to like someone. You hope to humanize that person, and you hope to present — say, someone like Mary — warts and all. Everyone at 60 Minutes — they always work...under the tick-tock of the clock, and...in a way that, maybe, they were guilty of being pressured by time. But what journalist isn't?

REDFORD: She wrote the book from a hurt place. She was hurt. She was hurt because of how her profession was treated and how she was treated within the profession. So, she wrote from that point of view. But I think Cate's performance so embodies that journey that she — she went through — including hurt — but also underneath the hurt is passion; drive; wanting to do the right thing; wanting to be a really good reporter.

BLANCHETT: ...[T]he wound is still raw. It's completely shaped and altered — not only their legacies as journalists, but also their day-to-day lives and perspectives, and — but yet, it's not a biopic. It's not about Dan Rather, and it's not about Mary Mapes. So you see them in a particular state of crisis. And so, they're both compelling, fascinating, vital, intelligent, hilarious people. But it's — it's, how do you then shoehorn all of that life force into a very short, intense space of time? And I think that was the — I found that the challenge.

Pereira concluded the interview by saying to her guests, "Well, congratulations. The film's terrific."