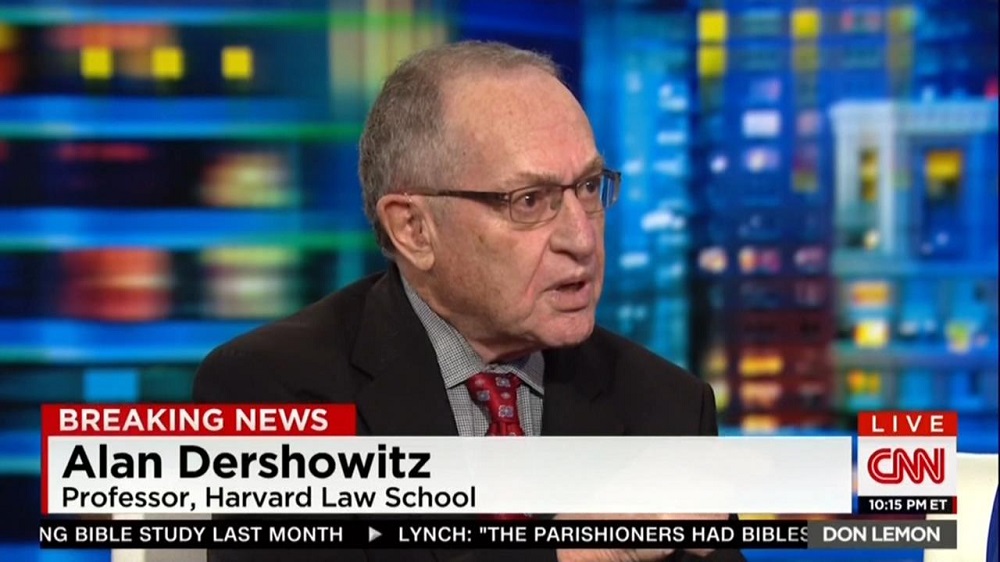 On Wednesday's CNN Tonight, Alan Dershowitz blamed police misconduct on societal racism. Dershowitz noted that he tells his students "particularly the African-American students: you have rights...Do not exercise them when you're arrested by a police officer." When Don Lemon asked him why he gives such advice, the Harvard Law professor replied, "Because they get into so much trouble if they don't do it. We live in a racist society, in which police officers often engage in this kind of conduct when you're contemptuous. And when you're a black person and you're contemptuous, it's even worse." [video below]

Lemon brought on Dershowitz, along with CNN legal analyst Sunny Hostin and former NYPD detective Harry Houck to discuss the death of Sandra Bland while she was in police custody in Texas. The anchor first turned to Hostin about the woman's mental history. She questioned the police department's handling of her detainment: "If the...jail was put on notice that she had [attempted] suicide, that she suffered...from epilepsy, why wasn't she on suicide watch? Why was she isolated in a cell? Why was she kept there for three days? It is just unfathomable to me – especially because we now know that same county jail...another suicide. So, why weren't there protocols put in place for that type of person?"

The CNN journalist then noticed that Dershowitz was shaking his head, and asked him why he was reacting that way. The professor replied by citing his advice to his law students, which sparked Lemon's specific question about his black students:

LEMON: Alan, you're shaking your head. Why?

ALAN DERSHOWITZ, PROFESSOR, HARVARD LAW SCHOOL: Look, she committed the worst crime possible: contempt of cop. I lecture my students – first-year criminal law students, particularly the African-American students – I say you have rights: constitutional rights. You're going to learn about them. Do not exercise them when you're arrested by a police officer. I'm not blaming the victim here. She was not at fault. But let young people understand, when a policeman arrests you, it's yes, sir; what can I do for you, sir? Yes, sir. You don't smoke at them. You don't give them any lip back, because you're going to end up on the wrong side of a gun, or the wrong side of an arrest-

LEMON: A lot of people don't want to hear that.

LEMON: People always say, why should you have to kowtow?

DERSHOWITZ: I understand that-

LEMON: Why should you kiss the cop's butt?

DERSHOWITZ: But I want young kids out there to understand that's very nice for older people to say. But if you're a young kid, if you're a young person arrested by a police officer, behave yourself; then, call me, and we'll sue them.

LEMON: Why – why do you have to give your black students that advice?

The three guests spent much of the segment arguing over racial profiling, as Houck objected to Dershowitz's premise. The Harvard academic, along with Lemon, underlined that even white individuals fall prey to police overreaction if they talk back. Hostin then returned to the original subject of Bland's arrest, and Dershowitz pointed the finger at the Supreme Court for such incidents:

DERSHOWITZ: I had a white student some years ago who was at a college. And he was arrested and he mouthed off on the police and he threaten to sue them, and he ended up dead. Contempt of police officer is an extremely dangerous thing to do, and just don't do it. No matter how you feel, hold it in; then, call a lawyer-

LEMON: Because you want them to stay alive-

DERSHOWITZ: I want them to stay alive.

LEMON: And I have a white friend who said the same thing. He said he mouthed off to a police officer – the officer snatched him in the car. He ended up in jail. His dad had to come get him. I want to read this to you, because this is from a friend who's a cop. And he said, 'Regarding the traffic stop, I wish people would just learn to be polite and cooperate. Combatant and defiance subjects make any exchange 100 percent more difficult for the police and the subject involved.' Now, this is someone who-

DERSHOWITZ: Of course; of course-

HOSTIN: The officer should be the person de-escalating the situation. To be clear, I agree with Professor Dershowitz. I teach street law classes-

HOUCK: I agree with that part-

HOSTIN: But that doesn't legitimize the officer's behavior.

LEMON: No! You're right; you're right. We're not arguing that. That's not the argument here-

DERSHOWITZ: There are eight white people who are very responsible for this: they're called justices of the Supreme Court. They rendered a horrible decision a few years ago in the soccer mom case...where they said that you can arrest somebody for a minor violation – took this woman to jail with their two kids in the car. The Supreme Court encouraged this kind of thing, and they shouldn't be doing that. When you have a traffic stop, you should be given a ticket. That's the same thing – it's true with that guy in Staten Island selling – give them a summons; give them a ticket; take a photograph. There's no reason for a police officer to have to confront somebody in a non-violent situation.