Salon.com apparently get can't get enough of former Occupy Wall Street participants, as the website featured far-left "journalist" Jesse Myerson on Sunday. Myerson, who infamously pushed for socialism in a January 2014 piece in Rolling Stone, listed seven supposed "huge misconceptions" about communism, and tried to whitewash the tens of millions butchered in the name of the discredited ideology.

The left-wing website's Twitter account heralded the writer's piece as "the best possible way to shut down your right-wing colleague railing against the ills of communism." Myerson, who includes a #FULLCOMMUNISM hashtag on his own Twitter profile, offered his beyond optimistic vision for a Marxist future:

...[C]ommunism is an aspiration, not an immediately achievable state....Given the technological, material, and social advances of the last century, we could expect an approach to communism beginning here and now to be far more open, humane, democratic, participatory and egalitarian than the Russian and Chinese attempts managed.

The former media coordinator for Occupy Wall Street led his article, "Why you're wrong about communism: 7 huge misconceptions about it (and capitalism)," by claiming that "as the commentary around the recent deaths of Nelson Mandela, Amiri Baraka and Pete Seeger made abundantly clear, most of what Americans think they know about capitalism and communism is arrant nonsense. This is not surprising, given our country's history of Red Scares designed to impress that anti-capitalism is tantamount to treason." He wasted little time before continuing with his seven "misconceptions," which amounted to Myerson knocking down straw men, mouthing oft-used talking points, and attacking some of the radical left's favorite boogeymen: 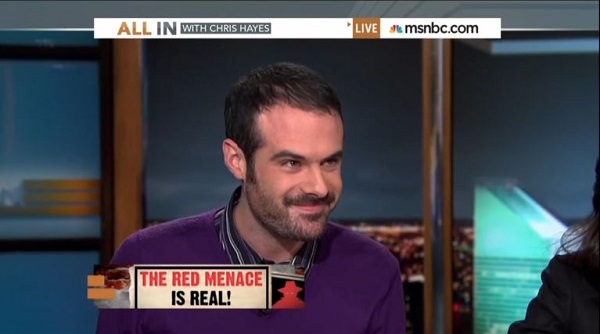 ...In capitalism, competing ownership claims are settled by the state's willingness to use violence to exclude all but one claimant. If I lay claim to one of David Koch's mansions, libertarian that he is, he's going to rely on big government and its guns to set me right. He owns that mansion because the state says he does and threatens to imprison anyone who disagrees. Where there isn't a state, whoever has the most violent power determines who gets the stuff, be that a warlord, a knight, the mafia or a gang of cowboys in the Wild West. Either by vigilantes or the state, property rights rely on violence....When Marxists talk of collectivizing ownership claims on land or "the means of production," we are in the realm of property; when Fox Business Channel hosts move to confiscate my tie, we are in the realm of personal possessions. Communism necessarily distributes property universally, but, at least as far as this communist is concerned, can still allow you to keep your smartphone.

...The origin of capitalism was depriving British peasants of their access to land (seizure of property, you might call it), and therefore their means of subsistence, making them dependent on the market for their survival. Once propertyless, they were forced to flock to the dreck, drink and disease of slum-ridden cities to sell the only thing they had – their capacity to use their brains and muscles to work – or die....Capitalists are compelled to support oppressive regimes and wreck the planet, as a matter of business, even as they protest good personal intentions. And that's just the principle of the system. The US's particular brand of capitalism required exterminating a continent’s worth of indigenous people and enslaving millions of kidnapped Africans. And all the capitalist industry was only possible because white women, considered the property of their fathers and husbands, were performing the invisible tasks of child-rearing and housework, without remuneration. Three cheers for free exchange.

Myerson did his best to spin the death toll of communism in the third "misconception" that he refuted:

Greg Gutfeld, one of the hosts of Fox News' "The Five" and a historical scholar of zero renown, recently advanced the position that "only the threat of death can prop up a left-wing dream, because no one in their right mind would volunteer for this crap. Hence, 110 million dead." In declaring this, Gutfeld and his ilk insult the suffering of the millions of people who died under Stalin, Mao, and other 20th Century Communist dictators....For one thing, a large number of the people killed under Soviet communism weren't the kulaks everyone pretends to care about but themselves communists. Stalin, in his paranoid cruelty, not only had Russian revolutionary leaders assassinated and executed, but indeed exterminated entire communist parties. These people weren't resisting having their property collectivized; they were committed to collectivizing property. It is also worth remembering that the Soviets had to fight a revolutionary war – against, among others, the US – which, as the American Revolution is enough to show, doesn't mainly consist of group hugs. They also faced (and heroically defeated) the Nazis, who were not an ocean away, but right on their doorstep.

...The most horrifying episode in 20th Century official Communism was the Great Chinese Famine, its death toll difficult to identify, but surely in the tens of millions. Several factors evidently contributed to this atrocity, but central to it was Mao's "Great Leap Forward," a disastrous combination of applied pseudoscience, stat-juking, and political persecution designed to transform China into an industrial superpower in the blink of an eye. The experiment's results were extremely grim, but to claim that the victims died because they, in their right minds, would not volunteer for "a left-wing dream" is ludicrous. Famine is not a uniquely "left-wing" problem.

Of course, the "journalist" glossed over the famines in Ukraine under Stalin in the 1930's and, more recently, in Ethiopia (a Soviet client state at the time) during the 1980's. Myerson also tried to downplay death toll of communism a few paragraphs later, as he revisited a point he made in a Tweet during the controversy over his Rolling Stone item [graphic at right via Dennis Prager's Facebook page]:

...The 100 million deaths that are perhaps most important to focus on right now are the ones that international human rights organization DARA projected will die climate-borne deaths between 2012 and 2030. 100 million more will follow those, and they will not take 18 years to die. Famine like the human species has never known is in the offing because the free market does not price carbon and oil-extracting capitalist firms  have, since the collapse of the USSR, become sovereigns of their own. The most virulent anti-communists have a very handy, if morally disgraceful, way of treating this mass extinction event: they deny that it's happening.

The writer made his "far more open, humane, democratic, participatory and egalitarian" contention about a communism of the future under his fifth "misconception." Surprisingly, he didn't directly quote from Marx until near the end of his piece:

...Communism envisions a time beyond work, when people are free, as Marx wrote, "to do one thing today and another tomorrow, to hunt in the morning, fish in the afternoon, rear cattle in the evening, criticize after dinner… without ever becoming hunter, fisherman, herdsman or critic." In that way, communism is based on the total opposite of uniformity: tremendous diversity, not just among people, but even with in a single person's "occupation." That so many great artists and writers have been Marxists suggest that the production of culture in such a society would breed tremendous individuality and offer superior avenues for expression....