Wednesday's CBS This Morning stood out as the only Big Three morning show to spotlight Henry Chao's stunning revelation to Congress – that a significant portion of the I.T. infrastructure needed to support HealthCare.gov has yet to be built. NBC's Today completely ignored Chao's testimony, while GMA aired a 19-second brief that vaguely summarized the hearing. Meanwhile, the ABC show devoted a 1 minute and 45 second report to a puppy that sleeps with a baby.

Major Garrett reported that Chao "told Congress Tuesday the team making emergency repairs still has another major task to accomplish: building 30 percent to 40 percent of the web systems needed to make payments to insurance companies." Garrett also featured two soundbites from the testimony of a panel of cyber-security experts, who warned that the ObamaCare website remains vulnerable to hackers: [audio available here; video below the jump]

MAJOR GARRETT: There are also still questions about the privacy of consumer data on the site. Cyber-security experts said HealthCare.gov remains vulnerable to hackers. 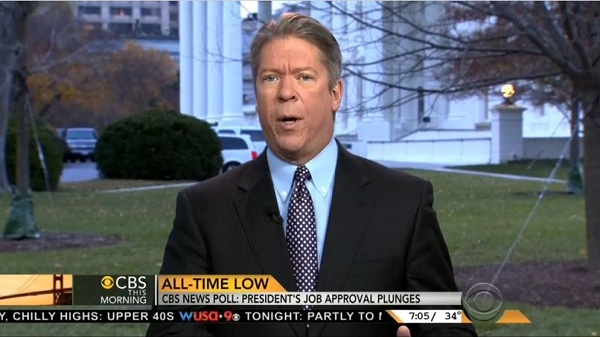 REP. CHRIS COLLINS, (R), NEW YORK (off-camera): Do any of you think the site will be secure on November 30?

Anchor Charlie Rose introduced the correspondent's report by touting President Obama's "all-time low" approval ratings, according to the latest CBS News poll. Co-anchor Norah O'Donnell explained that "only 37 percent of Americans approve of how the President is doing his job....And in the same poll, 43 percent of Americans say the Affordable Care Act should be repealed."

Moments later, Garrett pointed out that "President Obama said dissatisfaction with the law is all about the bungled HealthCare.gov website, and public opinion will rebound once the site improves." He soon added that "the President's credibility may be at stake: our poll found only 34 percent are confident the federal website will be fixed by the White House target date of December 1; 64 percent are not."

The correspondent then gave his "major task" line, and played his four clips from the House Energy and Commerce Committee hearing, including two from Chao and two from the Internet security experts. He concluded the segment by noting that "the White House insists HealthCare.gov is secure, and all private financial data will be protected. But White House assurances carry less authority. Our polling data indicates that for the first time, Democrats are wavering, and independents are beginning to join Republicans in either opposing the law or doubting the President's word."

On Friday's CBS This Morning, Garrett pointed out that Presiden Obama's "attempt to fix the problem of canceled insurance policies...fell flat", and cited an insurance industry expert who asserted that the federal government "just created another mess here, on top of all the other messes they've created."

[Update: the full transcript of Major Garrett's report on Wednesday's CBS This Morning can be read at MRC.org.]