Tuesday's CBS This Morning stood out as the only Big Three network morning newscast to cover the latest development in the controversy surrounding the September 11, 2012 Islamist attack on the U.S. compound in Benghazi, Libya. Gayle King gave a 26-second news brief to Secretary of State John Kerry clearing four mid-level diplomats to return to duty, after they were placed on leave by his predecessor, Hillary Clinton [audio available here; video below the jump].

Neither ABC's Good Morning America nor NBC's Today devoted any air time to Kerry's move. Instead, the two programs set aside full reports to Sunny, the new dog adopted by the Obama family.

An unsigned writeup on CBSNews.com outlined that Clinton had "placed Diplomatic Security Chief Eric Boswell, security officials Charlene Lamb and Scott Bultrowicz and Deputy Assistant Secretary of State for the Maghreb Region Raymond Maxwell on administrative leave." It also pointed out the State Department released a statement on Tuesday stating that "Kerry had carefully studied the findings of the agency's Accountability Review Board (ARB), and 'reaffirmed its finding that no employee breached their duty or should be fired but rather that some should be reassigned.'" 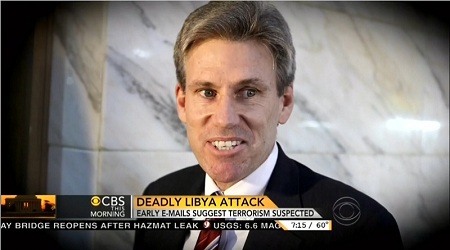 While Today was still on the air, NBC News posted an online article about Kerry reinstating the four diplomatic officials. It remains to be seen if this reporting will make it on the network's morning or evening newscasts. As of early Tuesday afternoon, ABC News has yet to report about this development on the air or on its website.

A November 2012 report by the MRC's Rich Noyes documented how the Big Three networks initially gave slanted reporting about the Benghazi attack, and then were reluctant to cover subsequent developments about the terrorist attack. This reluctance has continued into 2013, as best exemplified by the fact that CBS's Sharyl Attkisson, who has provided hard-hitting journalism on the attack for months, hadn't given an on-air report about the issue during a five-plus month period between November 23, 2012 and early May 2013.

The transcript of Gayle King's news brief from Tuesday's CBS This Morning:

GAYLE KING: CBS News has confirmed that Secretary of State John Kerry has cleared four State Department employees who were punished after last year's attack on the U.S. diplomatic post in Benghazi, Libya. The foreign mission – the four officials, rather had been placed on administrative leave by then-Secretary of State Hillary Clinton. Ambassador to Libya Chris Stevens and three other Americans were killed in the Benghazi attack. The four employees who were on leave will be reassigned, but they will keep their jobs.