ABC broadcasted two completely one-sided reports on Thursday's World News and Nightline on the supposed "huge spike in the number of Americans operating in the shadows, trying to take down the U.S. government even with violence," as anchor Diane Sawyer put it. Correspondent Dan Harris's main external source for his reports was a media favorite, the left-wing Southern Poverty Law Center [audio clips available here].

As she introduced Harris's first report on World News, Sawyer trumped that "a new study finds there are now nearly 1,300 militias and other extremist groups in this country, an increase from 149 groups in 2008. And one of the fastest-growing groups is called 'sovereign citizens.'" However, an examination of the SPLC's report in question find that many of these supposed "extremist" groups have been around for longer than four years, and the only change is that the leftist organization recently designated them as such.

[Update, 09:27 pm Eastern: audio added above; video below the jump]

Besides obvious and actual extremist associations - the KKK; neo-Nazis; and white and black nationalists - the SPLC identifies what they label as "anti-gay groups," "anti-Muslim groups," and "radical traditionalist Catholicism" in their broad "hate group" category, and lump in mainstream conservative groups in each. To them, the Family Research Council is the same as the troop-hating Westboro Baptist "Church," Robert Spencer's Jihad Watch is a hate group like the Hitler-idolizing National Socialist Movement, and the New Hampshire-based Slaves of the Immaculate Heart of Mary, whose chapel is recognized by the local Catholic diocese, are akin to Aryan Nations 88.

Harris singled out the "sovereign citizens' during his report, and began by highlighting three violent incidents supposedly associated with their movement:

HARRIS (voice-over): Sixteen-year-old Joe Kane emerges from a vehicle and kills two police officers. Then, he and his dad, in that white van, die in a blaze of bullets in a Walmart parking lot. Joe Stack flies his small plane into an IRS building in Austin, Texas. And Brody Whitaker leads police on a high-speed chase, exchanging fire, escaping through the woods.

BRODY WHITAKER (from 2010 trial): I am not an American citizen. I don't recognize these-

WHITAKER: I am my counsel.

HARRIS: All of them members of the 'sovereign citizens' movement, estimated at 300,000 strong. They believe the laws of America do not apply to them.

However, what the ABC News correspondent omitted is that all three events occurred back in 2010. Apparently, he couldn't find an incident from 2011 or from the first two months of 2012. Also, Whitaker outlandishly claimed he was the "grandson of God" and acted at his own attorney during his trial, pointing at severe mental illness as the cause of his rampage, instead of a blind devotion to an extreme political agenda.

Harris did the SPLC's bidding throughout his report, hinting a vague connection between mainstream conservatives, who see the growth of the federal government as a threat to individual liberty, with the organization's purported "extremists":

HARRIS: ABC News was able to get inside this movement, starting, of all places, at this diner near Tampa, where instead of men in camo, we found a diverse group, who argued the real threat is not them, but the U.S. government....Most insisted they are non-violent, but not all of them ruled it out.

UNIDENTIFIED MAN 2: I don't want to come here with this bullcrap about trying to impress the news- impress ABC News- about how friendly we are. I don't give a crap how friendly anybody is. If they come at me with a gun, I've got a gun, too, okay? That's what I'm about.

HARRIS: What sets 'sovereigns' apart from militias is, for the most part, they are not using guns, but instead, legal theories based on obscure laws, the Constitution, as well as the Bible- all of it used to justify flouting the law and avoiding paying their debts and taxes. 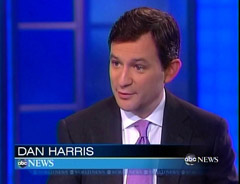 Near the end of the World News segment, Sawyer asked the correspondent, "What does law enforcement plan to do about this growing number?" Harris replied, "Quite a bit now- the FBI recently came out and said this is a top priority for them. And the Southern Poverty Law Center, the group that issued today's report on hate groups...recently made a DVD for local law enforcement officials who might encounter 'sovereign citizens.' In the last year alone, they said they got 90,000 requests for that DVD from cops."

Later in the evening, the ABC News journalist filed an extended version of his first report on Nightline, which included a more detailed outline of the ideology and tactics taken by the "sovereign citizens":

HARRIS (voice-over): [Donald Joe] Barber, who's a former photo copier salesman, has made himself into a scholar of sovereign ideology, a bizarre hobbling together of passages from obscure law books, along with parts of the Constitution and the Bible, all to justify flouting the law. People all over the country are now using sovereign theories to justify failure to repay their debts, and even to occupy foreclosed homes. And when police, prosecutors, and judges stand in the way of a sovereign, like Donald Barber, they often resort to a classic sovereign weapon called 'paper terrorism,' flooding officials with paperwork....

"Paper terrorism"? Is that something like death by a thousand papercuts? Back in December 2011, CNN boosted Occupy Wall Street's illegal tactic of "squatting" in foreclosed homes. Anchor Suzanne Malveaux asked the Marxist former Obama administration czar Van Jones how their occupation of the homes might help their leftist activism. One might guess that the media thinks it's okay for the far left to squat, but not for the "sovereign citizens."

After giving examples of the so-called "paper terrorism," Harris brought in the specter of the 1995 Oklahoma City bombing:

DONALD JOE BARBER, "SOVEREIGN CITIZEN": Benjamin Franklin [sic] stated that there should be a revolution every 20 years, okay? We're long time past due.

HARRIS (on-camera): Do you think we need a revolution now?

BARBER: I think we need a revolution, but not a violent one.

HARRIS (voice-over): Sovereign citizens do have a history of turning violent. Terry Nichols, co-plotter of the Oklahoma City bombing- a sovereign citizen....Joe Stack, who flew his small plane into an IRS building in Austin, Texas- a sovereign citizen. And then, there's Jerry and Joe Kane, a father and his 16-year-old son, who used to drive around the country, teaching people how to use sovereign legal theories to get out of debt....When they were pulled over in West Memphis, Arkansas in 2010, Joe Kane burst out of the car with an assault rifle and killed two officers....The Kanes were later cornered and shot to death in the parking lot of a Walmart.

There's a problem with identifying Nichols as a "sovereign citizen." When you use the term in the SPLC's search engine, the earliest mention was an article about a white nationalist group in Montana written about three years after the Oklahoma City bombing. Most of the other search results were written during the Obama presidency. Harris also gave the bomber this label in his 2010 reporting on the Kanes' rampage in Arkansas.

The left-wing organization tried to spotlight the "sovereign citizens" about a year ago as well. The March 7, 2011 edition of CNN's Newsroom brought on SPLC spokesman Mark Potok and touted him as an "expert on extremism." During the segment, Potok ripped the hearings that Rep. Peter King was holding about the thread from radical Islam, and claimed that the "biggest domestic terror threat...clearly comes from the radical right in this country." The "expert" went on to mention the "sovereign citizens" and the West Memphis shootings.

As the election-year debate continues over the controversial ObamaCare mandate that compels religious organizations to cover abortifacients, sterilization, and contraception in their health care plans without a co-pay, some Catholic bishops in the U.S. are calling for civil disobedience against what they see as an unjust encroachment on religious liberty by the federal government. It is completely plausible that a left-wing organization like the SPLC will go so far to label the Catholic Church itself an "extremist" group, and that they will have the willing cooperation of media outlets like ABC.