CNN to Advertisers: We're the Only 'Non-Partisan' Cable Network 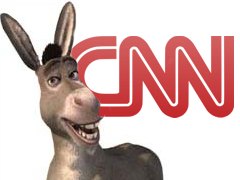 Stuart Elliott of the New York Times's Media Decoder blog reported on Tuesday that CNN, a network known for its consistent liberal bias, is now incredibly touting itself as "the only credible, nonpartisan voice left" on cable television. Elliott noted that this spin was being pitched by the network at a Tuesday morning event for advertisers at the Time Warner Center in New York City.

The New York Times writer highlighted the meeting hosted by CNN executives, and their overall strategy: "In a presentation to advertisers and agencies on Tuesday morning, executives of CNN indicated how they plan to counter the growing ratings of  — and buzz about — the rival Fox News Channel: play up their channel’s identity as an objective source of news." Elliott quoted Jim Walton, president of CNN Worldwide, as using the "credible, nonpartisan voice" phrase, and tried to put the face on his network's poor ratings during the first quarter of 2010: "[Walton and CNN executive vice president Greg D'Alba] alluded to the recent spate of news articles about CNN’s poor ratings...as Fox News...and MSNBC...stay ahead of CNN in prime time. Mr. Walton referred lightly to 'all the great coverage we’ve had' and Mr. D’Alba said that “there’s no way” the complete story was being told about CNN’s performance."

Later in the article, the writer cited Jonathan Klein, president for CNN's U.S. operations: "'Our mission, our mandate, is to deliver the best journalism in the world,' said Jonathan Klein....'No bias, no agenda.' That philosophy 'puts us in a category of one,' he added, as CNN’s competitors 'have abandoned the field' of objective reporting."

...[T]he executives parried the competition generically. For instance, in describing a new CNN show with John King, "John King U.S.A.," Mr. Klein said it was not a partisan opinion show fronted by an opinionated host "who stacks the deck with a bunch of people who agrees with him or her."

"We will never abandon our core faith in being the sole nonpartisan cable network in this country," Mr. Klein asserted.

Mr. King was part of a panel that took up a large part of the presentation. It was moderated by Anderson Cooper and also included CNN faces like Wolf Blitzer, Candy Crowley, Roland Martin and Mary Matalin. The latter two sparred several times over political issues.

Speaking of Anderson Cooper, he was the CNN personality who infamously used the vulgar "teabagging" term to describe the Tea Party protests during a segment in April 2009. Crowley herself used a similar term, "tea bag partyer," later in the year on November 2. Blitzer used a left-wing talking point on the health care debate on the September 22, 2009 edition of The Situation Room: "One of the most famous comedians joins some of your favorite actors to promote health care reform. So why are they defending health care...executives making billions of dollars at your expense?