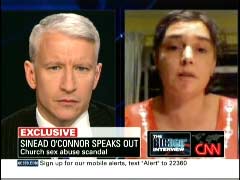 CNN's Anderson Cooper brought on anti-Catholic singer Sinead O'Connor on his program on Friday to discuss the Church sex scandal. Unsurprisingly, O'Connor, who infamously tore up a picture of then-Pope John Paul II on Saturday Night Live in 1992, has engaged in lesbian relationships, and went on to be "ordained" in a schismatic dissident church, spent much of the interview blasting Pope Benedict XVI.

The anchor aired the first part of his interview with O'Connor 15 minutes into the 10 pm Eastern hour. Cooper never brought up the celebrity's open dissent with Church teaching and practice during the interview, and only referred to her as a "singer." In his first question to his guest, he referenced her recent Washington Post column (in it, she actually urged her fellow Irish to stop attending Mass, but Cooper never raised this controversial proposal): "Sinead, in The Washington Post, you talk about this letter of apology that Pope Benedict wrote to the people of Ireland, and you say the letter is an insult to the people of Ireland. Why?"

During her response, the "singer" misrepresented a 1962 letter from the Congregation for the Doctrine of the Faith which actually deals with deviant clerics who made sexual advances to penitents during the Sacrament of Confession and within the Seal of Confession, and not victims of priestly sexual abuse:

O'CONNOR: Well, principally to the victims- the one thing that the victims really require for healing, and so do the rest of us as Catholic people, is a full admission by the Vatican that there was an active cover-up in operation for decades, since 1922. And we feel that it was an insult to our intelligence to suggest that the Irish hierarchy were somehow acting independently of the Vatican, when there are documents which show that there were very specific instructions in place which were issued by the Vatican to every bishop in the world and remained the rules until 2001. And amongst those rules were the instructions that the priests taking complaints, as well as victims making complaints, were to swear an oath of secrecy, under the threat of excommunication. So, I'm going to quote you a part: 'These matters must be pursued in the most secretive way, and after they have been defined or given over to execution, they are to be restrained by perpetual silence, and everyone pertaining to the tribunal is to observe the strictest secret, under penalty of excommunication.'

Cooper just took her word on the content of the document and replied, "It is such a haunting term, 'perpetual silence.'"

After a commercial break, Cooper aired the second part of his interview with O'Connor. He began by addressing the accusation against her that she is "anti-Catholic," but never mentioned her active dissent from Catholic teaching and practice: "The criticism that you and others get is that- well, you are just anti-Catholic, that you are actually targeting the Church or targeting this pope. How do you respond to that?"

The celebrity actually revealed her heterodoxy in her answer, but taking a relativistic approach to God, as well as misrepresenting the document she earlier cited, and even went so far to say that the leadership in the Vatican, including the pope, doesn't believe in God:

O'CONNOR: Well, you know, the fact is that this is why I am telling you all about these documents. These documents exist that show everybody that the truth is the truth- you know, and, personally, I would say I am a Catholic woman. I am proud to be a Catholic woman. I separate sometimes the difference between God and religion. I'm passionately in love with what I would call the Holy Spirit. I don't believe it matters if you call it God, Buddha, Krishna, Jesus, Fred or Daisy. It is the Holy Spirit. It does not matter. But what I would like to see, as a Catholic, is actually Christian, honest people running the shop. It seems to me that the Vatican are not- don't actually believe in God at all. They are certainly not acting like they believe in a God that watches. A Christian is supposed to say, in any given situation, 'What would Jesus do?' and try to do it. Would Jesus have covered up for decades all of this abuse, you know?

O'Connor claims to be "proud to be a Catholic woman," but Cooper never mentioned that she was excommunicated for her simulation of priestly ordination. When the anchor followed through on her "Vatican doesn't believe in God" point, she continued that "the pope's letter, itself, is full of lies and dishonesty, you know? It places him almost as a victim."

The CNN anchor actually broached the issue of her 1992 papal picture-destroying incident at the end of the interview, but O'Connor just rehashed her spin from her Post column of what happened: 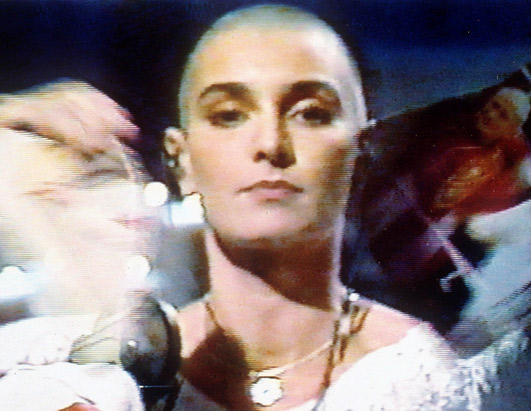 COOPER: I got to ask you about probably someone you have been asked a million times and are probably sick of being asked about it, but a lot of Americans clearly remember, back in 1992, you tore up a picture of then-Pope John Paul II when you were on Saturday Night Live. You said it was a protest, and that a lot of people didn't understand it. What do you want people to know why you did that, and does that in any way reflect on your thoughts now?

O'CONNOR: Well, you know, why I did that was that we in Ireland, sadly, knew in 1987 that clerical child sexual abuse was an issue. And, again, another little-known fact is that, in 1997- again, it's in these documents- the Irish church took out an insurance policy against future claims they foresaw would be made by victims of abuse. So we in Ireland, knew in 1987 that this was an issue. It didn't become an issue in America until 10 years later.  And so, I could totally understand why people were horrified by what I did and it was an abhorrent idea to suggest that priests could possibly be abusing children or that the Vatican could be covering it up, because it is abhorrent. It's absolutely abhorrent. Unfortunately, it is true. And those of us who came from Ireland, you know, we actually endured a particular brand of Catholicism, which was extremely violent towards children, psychologically, sexually, physically, all kinds of ways. And I am a survivor of child abuse myself, not by clergy, but- you know, I've always been someone who all of my records, all my career and everything was really standing for child abuse survivors. But I don't- what's the word- I completely understood why people find that offensive. I agree with them. It's abhorrent to think that a priest could be involved with children that way.

Earlier in the day,  CNN's Newsroom brought on two other dissident liberal Catholics, as well as a feminist Protestant, to use the abuse scandal as a pretense to push radical changes in the Catholic Church, such as the ordination of women and the acceptance of homosexual behavior. CNN seems to go out of its way to promote such left-wing Catholics-in-name-only to bash the Pope and Catholic teachings on life and sexuality. It's like interviewing and granting legitimacy a white supremacist to attack President Obama, but that would never happen on left-leaning network.
Media Bias Debate Europe Culture/Society Christianity Anti-Religious Bias Bias by Omission CNN Anderson Cooper 360 Pope Benedict XVI Sinead O'Connor