CNN’s Larry King equated efforts against further regulation of the banking industry to letting the mentally ill run their psych wards on his program on Monday. King pressed conservative columnist S. E. Cupp: “Banks are lobbying against a bill to tighten regulatory controls. Are you going to let the inmates run the asylum? You don’t think we should regulate banks?” [audio clips from the segment available here]

The CNN host moderated a panel discussion on the economy during the first segments of the program. The panel surprisingly leaned to the right on economic issues. Besides Cupp, King had Penn Gilette and Larry Elder, both libertarians, and liberal former Clinton administration official Robert Reich. After the host used the “inmates run the asylum” idiom in his question, the columnist first answered that “we do need regulation, but it’s putting them in a really tough spot.” King interrupted with a blunt one-word question: “So?”

Cupp continued by rebuking President Obama’s condemning tone towards the banking industry: “Well, I mean, they’re trying to make responsible decisions, and I think President Obama needs to respect the fact that they’re trying to be responsible, after years of irresponsibility, and you don’t scold someone who’s trying to be responsible. You help them. The tone was like something out of a Chicago backroom gentlemen’s club- you know, lend or else. It was strong-arming, and the tone should really be, let’s work together. Let’s strike a balance to assure your long-term health and...the long-term health of the economy.”

Later in the segment, which began nine minutes into the 9 pm Eastern hour, King posed the same basic question to both Elder and Gilette: 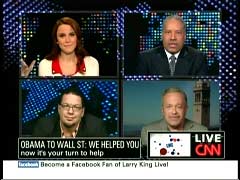 KING: Larry, do you think government has no say in this at all?

ELDER: Oh, of course, government has a say in it. You have to regulate against fraud. You have to regulate against abuse, and the banking industry is one of the more heavily regulated industries that we have. So every regulation has a reaction. The banks will try to figure out some kind of way around it. What you can do is police them to make sure they don’t cheat people, but beyond that, there’s not a whole lot that you could do or should do. Once again, these banks made decisions. Many of them were reckless decisions and they ought to deal with the consequences of those decisions. That’s how you let the next guy down the road know how to improve his behavior. If you don’t do that, you’re going to be back at same position down the road.

KING: Penn Jillette, as a libertarian, do you oppose regulation?

JILLETTE: Did he say taxpayers get the money back? Is there anybody that thinks there would actually be a check written back to us if they paid it back? I mean that- that’s the- that seems insane to me, and then, also, if you give me- Larry, I’ll make this deal with you right now. You give me $700 billion. You can call me anything you want, any time, on any show you want anywhere, deal?