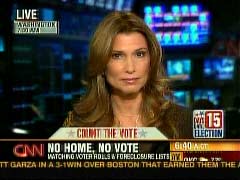 CNN correspondent Carol Costello’s report on Monday’s American Morning program unquestioningly repeated a claim by Democrats in Michigan that Republicans in the state would disqualify voters affected by home foreclosures. She began her report by phrasing the accusation this way: "Lost your house to foreclosure? Democrats in Macomb County, Michigan, say beware -- Republicans, they say, want to make sure you lose your vote, too."

Costello’s report, which began 40 minutes into the 7 am Eastern hour of the CNN program, is the first in a week-long series of reports by the network called "Count the Vote," which aims at "investigating potential problems in key battleground states" with the voting process, as co-host Kiran Chetry put it in her introduction to Costello’s report. Both Chetry and Costello iterated the Michigan Democrats’ contention in three slightly different ways at the beginning of the report. It’s based on a supposed quote by Macomb County, Michigan Republican chairman James Carabelli in the Michigan Messenger, a liberal website (Costello actually described it as such).

The CNN correspondent interviewed two couples, the Monacos and the Wards, who lost their homes in the Michigan county who repeated the Democrats’ accusation. She then reported how "Michigan Republicans say the Monacos and Wards should not worry. They say Carabelli was misquoted in the Michigan Messenger, and they're now suing the online publication for defamation." Costello tried to interview Carabelli for her segment, but he apparently didn’t return her calls. At no time did she try to verify if the two couples are still living in the same voting precinct so that they could still vote, a detail mentioned by Costello near the end of her report.

At the end of the segment, Costello reported that the state Democratic party and the Obama campaign had "gone to federal court asking for a restraining order to keep Republicans from using foreclosure lists alone to disqualify voters." But she then continued with another Democratic "fear:" "But Democrats fear Republicans will still challenge voter eligibility based on address, and of course, that could slow the voting, forcing some voters waiting in line to give up and go home." When Chetry asked about the Republicans’ denial of the Democrats’ accusation, she repeated how "Mr. Carabelli said he was misquoted, but when we -- when we asked to hear more from him, he declined interview." So did Carabelli fail to return calls, or did he actually decline the interview?

KIRAN CHETRY: Welcome back to the most politics in the morning. With huge voter turnout expected on Election Day, we're looking out for your vote. All this week, we're investigating potential problems in key battleground states. It's a series of reports we are calling 'Count the Vote,' and today our focus is on foreclosure victims in Michigan. Democrats in the state are claiming that Republicans want to find voters who have been booted from their homes to then be booted from the ballot box as well. Our Carol Costello is live in Washington with more for us this morning. Hey, Carol.

CAROL COSTELLO: Hi, Kiran. You know the fear is Republicans will use those foreclosures lists to prove registered voters are ineligible because their addresses don't match where they live now. Democrats call that unbelievably cruel.

COSTELLO (voice-over): Lost your house to foreclosure? Democrats in Macomb County, Michigan, say beware -- Republicans, they say, want to make sure you lose your vote, too.

MARK BREWER, MICHIGAN DEMOCRATIC PARTY CHAIRMAN: They've made that political calculation that, by and large, they don't want those people voting because they they're going to vote for Barack Obama.

COSTELLO: The hullabaloo started when reporter Eartha Jane Melzer of the liberal Michigan Messenger web site quoted Macomb County's Republican chair James Carabelli: ‘We will have a list of foreclosed homes and will make sure people aren't voting from those addresses.’ Democrats fear Republicans on Election Day will challenge voters whose addresses don't match where they live now -- like people who had been kicked out of their homes due to foreclosure. How many could that be? Macomb County Clerk Carmela Sabaugh, a Democrat, adds a dot for

every home foreclosed in her county. There are 5,090 of them. One of those dots represents what happened to the Monacos. We caught up with them at what was their dream home.

TONY MONACO, BANK FORECLOSED ON HOME: I can't believe it's even happening.

COSTELLO: Are you going to go to the polling station?

PEGGY MONACO, BANK FORECLOSED ON HOME: I think they're trying to kick you when you're down. It's not bad enough that you lose your home.

COSTELLO: The Wards also lost their home to foreclosure after payments ballooned.

JENNIFER WARD, BANK FORECLOSED ON HOME: You're down, you're depressed about it, you go through a lot of lows, and then for somebody to come and challenge you when you go in to vote because you actually feel like that you can make a difference -- I just think that's wrong.

COSTELLO: Michigan Republicans say the Monacos and Wards should not worry. They say Carabelli was misquoted in the Michigan Messenger, and they're now suing the online publication for defamation. The reporter stands by her story. 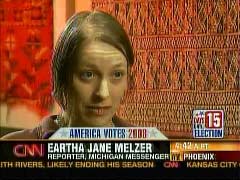 EARTHA JANE MELZER, REPORTER, 'MICHIGAN MESSENGER:' Right. I spoke with Carabelli myself, and I have total confidence in what he told me. I have clear notes of our conversation. There's no doubt about that.

COSTELLO: CNN tried to talk to Carabelli, but he did not return our calls. The state GOP declined an interview. In the meantime, the county clerk says a foreclosure list alone isn't enough to prevent someone from voting.

CARMELA SABAUGH, DEMOCRAT, MACOMB COUNTY CLERK, MICHIGAN: You do not have to own a home to vote. So if your house is foreclosed on, you have every right to vote.

COSTELLO: That's right. If you have been forced to leave your foreclosed home and you live in a different house in the same precinct, you can vote. You are still eligible. Michigan Democrats and the Obama campaign are taking no chances though. They've gone to federal court asking for a restraining order to keep Republicans from using foreclosure lists alone to disqualify voters. But Democrats fear Republicans will still challenge voter eligibility based on address, and of course, that could slow the voting, forcing some voters waiting in line to give up and go home. Kiran?

CHETRY: But Carol, to be clear, the Republicans are saying they have no plans to do that and that this one person who claimed he was going to do that was misquoted?

COSTELLO: Mr. Carabelli said he was misquoted, but when we -- when we asked to hear more from him, he declined interview.

CHETRY: All right. Interesting piece, and we look forward to more of them. Carol, thanks so much.