MSNBC Anchor Wishcasts: 'This Is Kind of the Beginning of the End of Twitter'

Far-left Tiffany Cross is gone from MSNBC. But liberal bias lives on in her vacated 10 am hour on Saturdays. Yasmin Vossoughian hosted the hour Saturday. And her villain of the day—aside from the former president whose name shall not be mentioned—was Elon Musk.

And when it came to Musk, Vossoughian's expressed the wish was that Twitter would die. As Vossoughian put it:

"I can't help but keep thinking, this is kind of the beginning of the end of Twitter."

If Vossoughian were honest about it, she would have substituted "hoping" for "thinking."

Her guest, MSNBC reporter Brandy Zadrozny, was also pleased to serve as a prophet of Twitter's doom: "It seems destined to fail from a technical standpoint. People are just sort of waiting around for it to break." 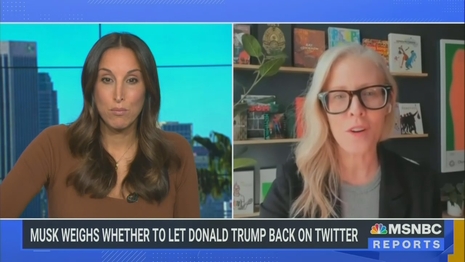 Zadrozny also described the Babylon Bee and Jordan Peterson, who have been reinstated at Twitter, as guilty of "hate speech and harassment" for "misgendering trans people."

Really? There's another story in the news about a transgender athlete. After finishing 72nd in a high school boys cross-country race last year, a student entered races as a transgender female this year, and won the conference championship.

If someone calls that student a "boy," is that "hate speech and harrassment"—or is it just "following the science" of XY and XX chromosomes?

In a no-good-deed-goes-unpunished moment, Vossoughian was very unimpressed by Musk's decision not to allow Alex Jones to return to Twitter. And Zadrozny went so far to analogize Trump to Jones—the man who despicably claimed that the Sandy Hook elementary school shooting, in which 26 people were killed, was a hoax. Said Zadrozny: "You know who else spreads a lot of misinformation and lies that incited a lot of violence? Donald Trump." 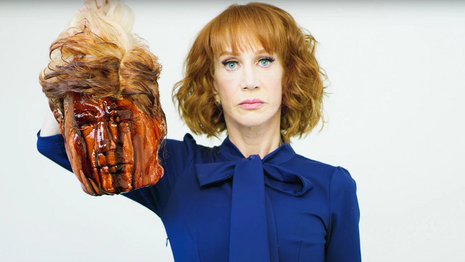 Funny: no mention by Zadrozny of Kathy Griffin inciting violence with this photo.

Note: Speaking of Tiffany Cross's defenestration by MSNBC, reports have recently emerged indicating that she was living the high life on the network's dime.

From a story in the New York Post [emphasis added]:

"The Post has learned from MSNBC insiders that [Cross] also had been under fire for allegedly racking up as much as $100,000 in expenses for five-star hotel stays.

During her two-year tenure at MSNBC, the host took trips to Los Angeles and the Super Bowl, portraying them as work trips, sources claimed. Cross’ Oscars trip, in which she allegedly stayed at the Beverly Wilshire on Rodeo Drive for an “extended stay,” raised eyebrows, according to a source.

“She’s staying at a hotel NBC’s execs don’t stay at,” the source said of the Four Seasons-owned hotel, which charges more than $1,000 a night for a basic room during high season.

MSNBC wishcasting the end of Twitter was sponsored in part by Verizon, Ancestry, Wayfair, Subway, and Flonase.

YASMIN VOSSOUGHIAN: I want to bring in Randi the draws, NBC News senior reporter who covers the internet and misinformation as well. Brandy, great to talk to you. I think everybody wakes up every morning wondering, is this, is this it, it this the last day? Is Twitter going to work this morning when you go to your feed? It's still working, by the way: news update. But I can't help but keep thinking this is really kind of the beginning of the end of Twitter.

BRANDY ZADROZNY: It seems destined to fail from a technical standpoint. That's what people are telling us. We're waiting for sort of a large moment, a large traffic moment like, say, the World Cup, which is coming up. Something like that. But people are just sort of waiting around for it to break. And a lot of people have already fled the platform.

VOSSOUGHIAN: And then there's this ultimate decision, right, we're all wondering if the former president's going to be reinstated to Twitter. He [Musk] has put out a public poll asking folks if they believe he should be reinstated. And Elon Musk has already reinstated, let's see, Kathy Griffin, who impersonated Elon Musk in the beginnings of the changeover to this buying for check marks. Jordan Peterson, Babylon Bee, also, Elon Musk tweeted, were reinstated. But he still hasn't decided whether or not he was going to reinstate the former president. Where do you suspect this is going to go?

ZADROZNY: I don't like to make predictions, but I feel incredibly comfortable making this one, that Donald Trump will absolutely be allowed to be back on Twitter. But it is interesting, right? Who is allowed and who isn't allowed? All we have is to peer into the mind of a posting billionaire.

But who did he bring back yesterday? He brought back Jorden Pederson, the Babylon Bee, and Kathy Griffin. So, the Babylon Bee and Jordan Peterson, they were taken off the platform, they were suspended, for for misgendering trans people. So apparently, that policy against hate speech and harassment of trans people, that's done with. That's important. This comes at a time when trans people are being harassed and violence is aimed at them at sort of unseen levels than before. So this sort of matters.

Trump, it seems like, this is marketing for Elon. The poll that's out right now. It's all, should we, won't we, will we? So, yeah, Trump will be allowed back on. But who isn't he allowong back on the platform? Alex Jones. So again, there is a line, but what that line means or what that states -- it's just very unclear. It's at the whim of Elon Musk.

VOSSOUGHIAN: Right, like Alex Jones is the bar? A guy who spread lies and misinformation about children that were killed in a mass shooting in Connecticut? That's the bar? Think about what that's actually going to look like in the future.

ZADROZNY: I guess that's the one. But you know who else spreads a lot of misinformation and lies that incited a lot of violence? Donald Trump.

VOSSOUGHIAN: Donald Trump. Exactly. And the guard rails now will, definitely, it seems, be off.