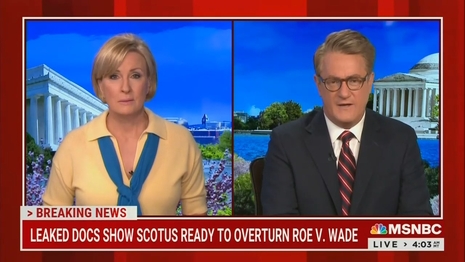 Just like last night's MSNBC primetime programs, Morning Joe has reacted with predictable horror to the news of the leak of a reported draft Supreme Court decision overturning Roe vs. Wade.

Former Newsweek editor Jon Meacham portentously proclaimed that the decision is a "nightmare scenario" that makes us ask "are we up to democracy? Are we commensurate to the task? And, I'm worried that we're entering the darkest period of that test."

Scarborough and Meacham's central argument was that the decision runs counter to "public opinion." Scarborough repeatedly cited polls indicating that 70% of people support Roe. Of course, a central goal of the Constitution, in establishing life terms for SCOTUS Justices, was to insulate them from public opinion.

As for those polls, moreover, if you asked Americans, "what would be the result of overturning Roe?," you can imagine that many would say, "it would make abortion illegal." Of course, that is not the case. It would simply return the matter to the states, the way it was for the first 197 years of the United States. The Left never hates federalism more than on abortion.

And, at least in that crucial opening segment, Scarborough never acknowledged that the Roe decision was so flawed that even liberal legal scholars have sharply criticized it.  Indeed, as we noted two years ago, one of MSNBC's legal analysts, Danny Cevallos, said on Morning Joe that Roe is "ripe to be overturned" because "even if you are pro-choice, the right to privacy [upon which Roe was based] does not exist either in the history or the text of the Constitution," and he added that Roe "stands on a weak foundational basis."

To his credit, Willie Geist did say:

"As Joe points out, poll after poll shows this is about a 30% position that the Supreme Court has taken. It doesn't, obviously, operate on polls. It operates on whether or not they believe this, Roe vs. Wade, should be upheld, whether it's legal. "

Note: back when he was a congressmen from Florida's conservative panhandle, Scarborough consistently voted in favor of pro-life legislation. Now he sounds pretty much like Rachel Maddow.

MIKA BRZEZINSKI: The final opinion is expected in late June or early July. Joe, so many different moving parts here, but, overall, what does this story mean for the Supreme Court?

JOE SCARBOROUGH: Well, I mean, for the Supreme Court, in a word, illegitimacy. You know, the Court's always been guided by the law, but it's also been keenly aware that it is the only unelected branch of American government. They needed to not appear to be openly contemptuous of public opinion.

That would be especially true today, given the GOP's might-makes-right approach to the sacking of Merrick Garland's nomination. Or the elevation of Donald Trump's final pick . . . As Kissinger said, I think during Vietnam, perception is reality. Obviously, the perception for 70% of Americans waking up this morning, is, is going to be, most likely, that this is an illegitimate decision by an illegitimate court.

JON MEACHAM: Well, the crisis of trust in institutions has just become universal in a way that is pretty much the nightmare scenario, if you believe in the ultimate efficacy of the constitutional order to produce a more perfect union, right? To protect the Jeffersonian assertion of equality. To protect the rule of law, for all of its imperfections. The system has been worth defending for 250 years.

Right now, if this draft decision, if the Court were to go this far, you will have, as you were just saying, an extraordinary number of Americans believing that the system, in fact, cannot, is not capable of delivering justice, is not capable of reflecting the popular will, even through the constitutional prism.

And I think that, you know, one of the great questions of the era, the great question of the era, is are you and I, are we, in this decade, are we up to democracy? Are we commensurate to the task? And, I'm worried that we're entering the darkest period of that test. Because if you have any reservations about the system's capacity to deliver justice, they have just been affirmed.

WILLIE GEIST: Neil Katyal, again, this isn't actually terribly surprising based on the oral arguments we heard in the Dobbs case back in December. But, as Joe points out, poll after poll shows this is about a 30% position that the Supreme Court has taken. It doesn't, obviously, operate on polls. It operates on whether or not they believe this, Roe versus Wade, should be upheld, whether it's legal.

But you've slept on this. You've read through most of the opinion, or the draft opinion. What is your first blush reaction, first to the substance of it, and second to this leak?