Anyone recall Morning Joe complaining about a conservative being canceled? Or defending all-purpose iconoclast Joe Rogan, currently in the crosshairs of the cancel crowd? Usually, they're pushing for some Republican to resign.

But let a fellow liberal come under scrutiny, and Morning Joe will passionately protest cancel culture!

The latest example of Morning Joe's selective outrage over cancellation came on today's show. Mika Brzezinski and Joe Scarborough were indignant over the two-week suspension meted out to Whoopi Goldberg of The View for her insensitive and ill-informed comments on the Holocaust.

"This unbelievable need to punish and judge people . . . I mean, if Whoopi Goldberg is canceled, that would be -- that would be the end, I mean, of this all. This cancel culture is getting so out of hand."

"Help me understand this, Eddie [Glaude Jr.] We talk about cancel culture all the time. 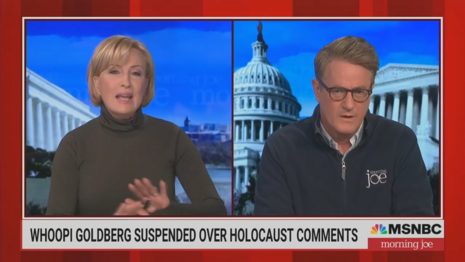 Without spelling it out, Joe and Mika spun some sort of veiled conspiracy theory about Whoopi's suspension. Scarborough wondered who at ABC was so "frail," as to suspend her. And Mika claimed that the suspension "seems more about something else," without explaining what that "something else" might be.

This isn't the first time that Morning Joe has risen to the defense of a fellow liberal caught up in cancel culture. Last year, we caught Mika working to rehabilitate Alexi McCammond. Before she actually began her tenure, McCammond had been fired as editor-in-chief of Teen Vogue, a hard-left site, when old tweets were discovered in which she wrote of "swollen Asian eyes" and a "stupid Asian TA."

Brzezinski never mentioned the offensive tweets themselves, but instead allowed McCammond to paint herself as the victim, saying:

"The last few weeks have been really painful, to be sure, not just for me, but for many folks in the AAPI community and others who were hurt by all of this."

As I wrote at the time:

"Uninformed viewers might have been deceived into thinking that Alexi was the one forgiving others for their transgressions!"

And Morning Joe similarly condemned cancel culture in the case of fellow MSNBC lib Chris Matthews, who was forced into retirement.

Morning Joe should shelve the selective outrage. Condemn the cancellation of conservatives, too, Joe and Mika, or your protests against cancel culture ring false, amounting to nothing more than defending your liberal friends.

And speaking of liberals helping liberals, Scarborough cited the fact that the head of the Anti-Defamation League accepted Whoopi's apology—as if that closes the case.  The ADL:has become basically just another liberal interest group, advocating "progressive" positions on a variety of issues.

Note: in an on The Late Show with Stephen Colbert, Goldberg actually seemed to shift blame from herself to the people who heard her comments, saying: "I’m very upset that people misunderstood what I was saying."

Morning Joe protesting cancel culture in the case of the two-week suspension of Whoopi Goldberg from The View was sponsored in part by Sling TV, GlaxoSmithkline, maker of Trelegy, and CarFax.

JOE SCARBOROUGH: Help me understand this, Eddie [Glaude Jr.] We talk about cancel culture all the time. Whoopi hasn't been canceled, but she's been, she's been suspended.

SCARBOROUGH: The head of the ADL apologo --

SCARBOROUGH: -- accepts Whoopi's apology, appreciates it, and says she has been a long-term ally of the Jewish community. So what am I missing here?

EDDIE GLAUDE JR.: Joe, like you, I'm a bit baffled.

If you don't know her heart, then you haven't been watching! And so that's why the two-week suspension, to me, seems more about something else, and something that maybe we need to start putting behind us. Which is this unbelievable need to punish and judge people.

MIKA: When they've made a mistake, or when they've learned something out in the open with the public watching . . . And I hope that there is learning for everybody on the show in terms of grace. In terms of forgiveness. In terms of more of a space of kindness. I know that may not make as many ratings.

But, you know, this is, this is something that is just going to, like, start getting ridiculous. I mean, if Whoopi Goldberg is canceled, that would be -- that would be the end, I mean, that would the end of this all. This cancel culture is getting so out of hand.