When Biden's going gets tough, his toughest dead-enders in the liberal media get going.

Monday brought the latest polling blow: Biden's approval rating has sunk to an abysmal 39% in the Harris CAPS/Harris poll. Pro tip: any poll that has "Harvard" in its name is definitely not biased against Biden!

And sure enough, the Morning Joe crew was out there today, doing its best to 'splain away Biden's dwindling support.

First up was Politico's Jonathan Lemire, who in an exquisite bit of understatement called Biden's poll numbers "not all that high." Sort of like Mario Mendoza's batting average, Jonathan?

Next was Never-Trump Republican Elise Jordan, who claimed Biden's bad numbers are "a little overhyped," and that "really, so much of it is situational." Yeah: the "situation" being that Biden is a weak President with a terrible record on everything from the border, to Afghanistan, to inflation, to Covid. 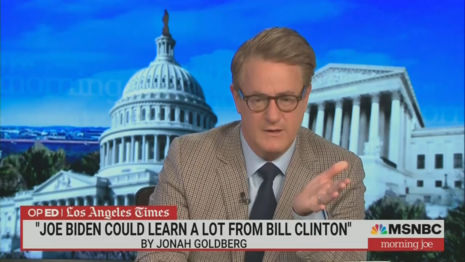 Just keep whistlin' past the graveyard, Morning Joe! Denying the depths of Biden's political predicament isn't going to help him dig out of his hole.

Note: As we've noted here and here, this isn't the first time Morning Joe has tried to put lipstick on Biden's political pig.

JONATHAN LEMIRE: Obviously, Biden is saddled with slim margins in the House and the Senate, which I think is some of the belief, like, hey, he's aiming too big. He should be more modest in what he tries to accomplish.

We see his poll numbers not all that high. But, administration officials say, look, he's actually accomplished quite a bit in this first year. Yeah, Build Back Better hasn't happened yet, but they got the infrastructure bill through, and the big Covid relief bill. Two out of three, in terms of massive pieces of legislation. Where should he go right now? Does he need a course correction, or should he plow straight ahead?

ELISE JORDAN: You know, I do think it's a little overhyped: oh, Biden's approval is so far down. It's just a really terrible time right now. We're going into year three of a pandemic.

JORDAN: People are tired. People are just sick of having their lives upended. And, especially for the month of January, didn't really feel that there was an end in sight.

And so I think, really, so much of it is situational. I also think he overpromised and he hasn't actually delivered on some of the sweeping promises that he thought would happen, like Build Back Better. And so, break it down. Just get through Congress what you can get through, and what's palatable. Have something on the board when it comes to midterms.

JOE SCARBOROUGH: Yeah. You know, Willie, it's hard to imagine how things would be going if we hadn't had the delta surge, if we hadn't had the omicron surge. Biden was sitting at 52%, 53%, 54%. And we can talk about bills, and legislation, and all the mistakes Democrats have made, and they've made a lot of mistakes, but you go back and look at the numbers, they started falling with Afghanistan. But then delta. Then omicron. And inflation.

You have all of these things, that you've got a virus that keeps coming back because people won't get vaccinated, first. And secondly, you have inflation. And I don't care who the President of the United States is, and, yes, you know, you and I have talked about it, it doesn't make a lot of sense to spend trillions and trillions of dollars when you're in an inflationary situation.

Still, as Rattner always tells us, there's $2 trillion sitting on the sidelines. People haven't been able to spend their money for a couple years. It doesn't matter who the President of the United States was, we were going to have inflationary pressures. And now, of course, his challenge is getting through that.