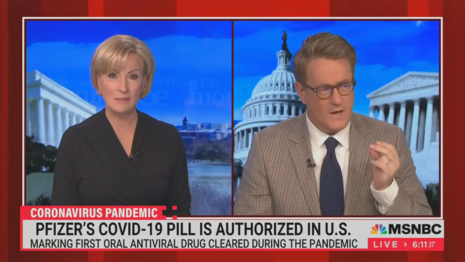 The opening segment the December 23 Morning Joe was one — interminable — tongue bath for Joe Biden. On everything from the omicron variant to the supply chain, to inflation, the panel lavished praise on Ol' Saint Joe.

The praise reached its absurd apotheosis with Joe Scarborough and Mika Brzezinski—joking-not-joking—repeatedly speaking of a "Christmas miracle," and Scarborough urging Democrats to put out a bumper sticker, "The White House That Saved Christmas."

Jonathan Lemire has transitioned smoothly from supposedly objective Associated Press reporter to all-in MSNBC liberal hack. He claimed that Jen Psaki had merely "joked" that "the White House saved Christmas." Here's the video. Yes, she said it with a brief smile, but — dead serious — continued: "...that is because President Biden recognized this challenge early, acted as an honest broker to bring key stakeholders together, and focused on addressing practical problems across the global supply chain." Some joke.

Psaki was surely counting on liberal media outlets to echo her line, and sure enough, Morning Joe delivered. First Scarborough, and then Lemire, parroting Psaki, both defended and praised his party of choice:  "Democrats are too often accused of participating in the war on Christmas, and now this time, they've saved it."

Enough to make you spit out your egg nog!

Note: regarding inflation, Scarborough made a claim that was flat-out false. He said:

"About a month ago, we were talking about inflation, and the supply-chain crisis. It was a massive crisis. I'm not exactly sure what everybody's done over the past month, but whatever they have done, as we won't call it a Christmas miracle, but we will say it's a heck of a turnaround."

In fact, as even CNN has reported, a key measure of inflation has increased at the fastest rate in four decades:

Prices remain high in America, and inflation shows no sign of slowing down anytime soon.

A key measure of US inflation rose 5.7% in the 12 months ended in November, the Bureau of Economic Analysis said Thursday. It was the fastest increase in the consumer spending price index since July 1982.

The only "miracle" is that Scarborough had the chutzpah to pass off Biden's abject failure on inflation as "a heck of a turnaround."

Amidst all the cheerleading for Biden, Politico's Sam Stein sounded a note of caution. Regarding omicron, Stein made the case that there were still several unknowns. That earned the good-natured Stein Scarborough's  facetious [?] scorn as "Madame Downer" and "Ebeneezer."

Scarborough also managed to work in a shot at Republicans. In urging the Biden administration to put out a bumper sticker saying, "The White House That Saved Christmas," Scarborough said that if you think Republicans wouldn't do that, "you don't know Republicans."

Morning Joe hailing Biden's supposed "Christmas Miracle" and speaking of "the White House that saved Christmas" was sponsored in part by BMW, Ameriprise, and Liberty Mutual.

MIKA BRZEZINSKI: There are promising signs in this current wave of Covid-19. New research is adding to the body of evidence that the omicron strain results in milder illness than previous strains.

JOE SCARBOROUGH: We seem to be, as a nation, in a pretty good place to handle this variant.

SAM STEIN: Let's hope, right? I mean, fingers crossed. The data, while anecdotal, still may be pretty promising, I guess, relative to what it was in March 2020. That said, you talk to any medical professional, there's a few things they're worried about . . . While there are some promising signs here, I do admit that, I don't want to be a Debbie Downer, obviously we're heading into a  holiday season, you do want to temper your excitement by saying, okay, there are still a lot of unknowns out there.

SCARBOROUGH: Of course, and so noted, Madame Downer . . . Okay, well, you play that role, Ebeneezer.

JONATHAN LEMIRE: I'll just start by noting that Sam brings me down everyday.

SCARBOROUGH: But Mika, also some other really great news, and then we'll get on also, I don't think it's called breaking news on the supply chain.

SCARBOROUGH: The Christmas miracle: we'll talk about that.

We had heard two weeks ago, three weeks ago, not to expect to get those packages.

MIKA: I know! That's why all I got my Christmas shopping done at Thanksgiving.

It was, Jonathan, about a month ago, we were talking about inflation, and the supply-chain crisis. It was a massive crisis. I'm not exactly sure what everybody's done over the past month, but whatever they have done, as we won't call it a Christmas miracle, but we will say it's a heck of a turnaround from what most of America was expecting one or two months ago.

LEMIRE: Yeah, Democrats are too often accused of participating in the war on Christmas and now this time, they've saved it.