CNN was finally forced to fire Chris Cuomo over the extensive assistance the prime-time host provided to brother Andrew regarding his various scandals.

So you might think that "The Most Trusted Name in News" would be on high alert to avoid any similar journalistic malpractice by its anchors. 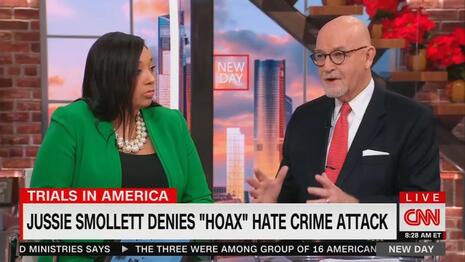 But incredibly, as our Nicholas Fondacaro has reported, CNN permitted Don Lemon on his show last night to air a segment on the Smollett trial . . . without mentioning that Smollett had testified that Lemon himself had tipped him off that the Chicago police were not buying his story about being the victim of a racist, homophobic attack!

This is journalistic malpractice taken to theater-of-the-absurd heights!

While CNN's suppression of the Lemon-Smollett angle is reprehensible, it is, on a certain base level, understandable.

But what explains MSNBC's cover-up of the Lemon-Smollett connection? Morning Joe covered the trial today, but nary a word of Lemon. In the 6 am hour, legal expert Charles Coleman found Smollett's testimony "very bizarre."

Could CNN and MSNBC have some sort of Mutually Assured Destruction pact?

CNN covering up the fact that at his trial, Jussie Smollett testified that CNN anchor Don Lemon tipped him off that the Chicago police weren't buying his claim to have been the victim of a racist, homophobic, attack was sponsored in part by Liberty Mutual and Land Rover.