Heaven forbid that "kooks" — you know, the kind of people who watch Fox News — will run for school boards! That was the message from CNN Thursday morning. New Day had on supposed "moderate" Michael Smerconish to discuss Attorney General Merrick Garland's testimony on Wednesday before the Senate Judiciary Committee, and the memo he had sent to the FBI regarding reported threats of violence against school board members.

Twice, Smerconish fretted about who would replace school board members who resign because they have felt threatened or intimidated: "What I'm most worried about is that the people who will step forward will be the kind of kooks who come out at these meetings and make threatening comments...God help us in terms of who will be [their] replacements."

Smerconish didn't come right out and call Fox News by name as the source which, in his view, is poisoning the minds of parents. But his snide claim that "we know where they get their news," left no doubt that he was alluding to the fair 'n balanced network which — it just so happens — is trouncing his employer CNN in the ratings.

Co-host Brianna Keilar claimed "we should be clear" that there was a letter from the school board association to the Biden administration. But rather than being clear, Keilar was clearly deceptive. She framed the letter as simply "looking for help, because clearly school boards have been suffering a lot of violent threats, and a lot of tumult."

What she failed to disclose was that the school board association letter—signed by its two most senior officials—branded parent protests as "domestic terrorism." 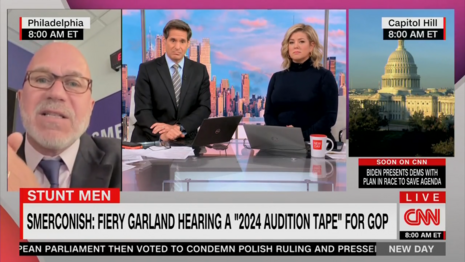 Yes, when parents reacted with outrage to the accusation, the association subsequently withdrew the letter. But that "domestic terrorism" bell couldn't be un-rung. It was that accusation that Garland responded to with his memo to federal law enforcement.

Keilar engaged in a second bit of deception. She claimed that parents are protesting over "teachings about racial history in America." What an innocuous — and misleading — way of describing Critical Race Theory that has crept into curriculum nationwide.

CNN fretting that school board members will be replaced by Fox-News-watching "kooks" was sponsored in part by Lexus, Dell, Sandals, and Tractor Supply.

BRIANNA KEILAR: Attorney General Merrick Garlands defending a Justice Department memo that reports a disturbing spike in threats of violence against school employees and board members.

Now, to be clear here, this DOJ memo makes zero reference to domestic terrorism. Republicans are accusing the DOJ of treating parents like domestic terrorists for protesting school COVID restrictions and teachings about racial history in America.

TED CRUZ: This is a memo to the Federal Bureau of Investigation saying go investigate parents as domestic terrorists.

Michael, we should be clear, there was a letter from the school board association that went to the Biden administration looking for help, because clearly school boards have been suffering a lot of violent threats and a lot of tumult. But that was not what this Merrick Garland letter, this DOJ letter, said. What do you think about how this all went down?

JOHN BERMAN: What do you think of the way the Attorney General handled it?

MICHAEL SMERCONISH: Too much of a gentleman, frankly. I think that it demanded a little more forceful of a reaction. He should have said are you blanking me?

But John, here's the problem. The problem is that 50% of the country is going to walk away from this exercise—because we know where they get their news—convinced that Merrick Garland did say that these parents are domestic terrorists.

Listen, I'm most concerned about who will step forward, and for little or zero pay, want to be on the school board. And what I'm most worried about is that the people who will step forward and fill that void are the type of kooks who come out at these meetings and make threatening comments.

Don't misunderstand what I'm saying. I'm for spirited debate, as you can tell also. But the people who go out and threaten school board members, they're the ones who will probably end up running for the school board, and that should worry all of us.

KEILAR: We've had school board members on who have said, I had to resign. I was worried about the safety of my children.

SMERCONISH: Guess what? It pays zero to be on the school district where I was born and raised, and educated. So that's the precise example of what I'm thinking about. That poor guy, who for all the right reasons wanted to serve, and now, he's out of the community. And, you know, God help us in terms of who will be his replacement.