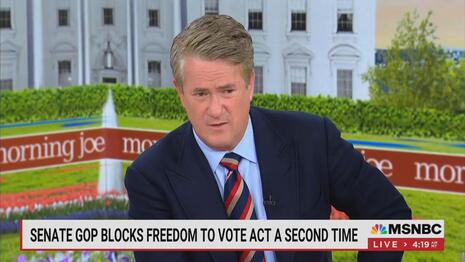 Joe Scarborough has a bad habit of riding verbal hobbyhorses into the ground. As we've often documented, as here and here, once Joe gets what he thinks is a catchy phrase into his noggin, he repeats it—ad nauseam.

Scarborough's hobby horse o' the morning on today's Morning Joe was accusing Republicans of "standing in the schoolhouse door," with an explicit reference to George Wallace, who infamously blocked desegregation in such manner.

Scarborough uttered his "schoolhouse door" line no fewer than seven times, with Al Sharpton chipping in for an eighth edition.

Scarborough was outraged that Republicans, led by Mitch McConnell, blocked votes on raising the debt ceiling, and more recently, on the Dems' "voting rights" bill.

Predictably, Scarborough made no mention of Republican objections to the bill, which would have federalized elections, and imposed measures ripe for fraud such as same-day registration.

The irony is that when it comes to George Wallace, the people pushing segregation today are the liberals, on everything from segregated dorms, to college courses, to graduation exercises -- even to rock-climbing walls at my Cornell alma mater! 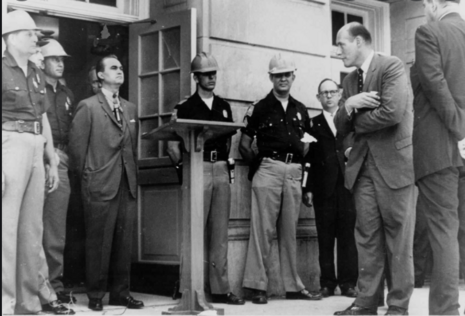 Note: Analogizing Republicans to George Wallace—who was, of course, a Democrat—is a time-honored MSNBC tradition. Here are Al Hunt and Joy Reid indulging that fantasy.

MIKA BRZEZINSKI: For the second time this year, Senate Republicans prevented the Freedom to Vote act from moving forward, after Senate Minority Leader Mitch McConnell said his party would oppose it. The bill included provisions like automatic and same-day registration, no-excuse mail voting, and would make Election Day a holiday.

JOE SCARBOROUGH: Well, these things, Mika, would seem to get more people involved in American democracy --

SCARBOROUGH: So that sounds like a good thing . . . The Republicans are, have taken obstruction to a new level . . . They blocked the vote. They stood, in sort of a schoolhouse door situation. The were like George Wallace. They stood in the doorway, and stopped people from being able to go in and vote to expand voting rights for all Americans.

This is a do-nothing Republican congress. And again, just does more than not vote for expanded voting rights. They stand in the schoolhouse door and block anybody from voting.

It wasn't enough that Republicans were against voting for raising the debt ceiling, they stood in the schoolhouse door, and blocked anybody from going into the chambers and voting to raise the debt ceiling.

Now, here we are in the age of Trump. And there's not a single Republican who will vote for it. Not only that, they're standing in the schoolhouse door.

AL SHARPTON: Yesterday, not one senator on the Republican side--not one!-- no, not a one, voted even to go forward to debate. It wasn't even the bill! It was, we won't even let you debate the bill. As you say: standing in the schoolhouse door.

Let's make no mistake of it. It's the Mitt Romneys, it's the Ben Sasses, it's the John Thunes. It's people that I've loved and respected my entire adult life, that are standing in the schoolhouse door, or in this case, standing in the Senate door, and they are stopping voting rights bills from even being debated.