Somebody call the SPCA: Joe Scarborough has, yet again, ridden a hobbyhorse into the ground! Regular readers of NewsBusters are only too familiar with Scarborough's tiresome habit of fixating on a word, and repeating it ad nauseam in the course of a segment.

Scarborough's word o' the day this morning was "fascist," and with a little help from Mika Brzezinski and John Heilemann, that f-word was deployed to denounce President Trump no fewer than 19 times in the opening segment.  View the video mashup to see Scarborough's shtick unfold.

What set Scarborough off into fits of "fascist?" There was Trump's lack of sufficient regard for recommendations on wearing masks. But in particular, what sparked Scarborough was the president's criticism, at a rally in Pennsylvania earlier this week, of The Squad in general, and Ilhan Omar in particular. Said the president:

Let's stipulate: Ilhan Omar was a refugee from Somalia, and now a citizen of the United States. But this is the woman who dismissed 9/11 as "some people did something." And Omar was similarly dismissive about American casualties in the 1993 "Black Hawk Down" operation. The US might, as a legal matter, be her country, but she is no American patriot in any traditional understanding of the term.

Note that in addition to his "fascist" mantra, Joe worked in two Trump/Nazi Germany analogies.

What possible political benefit does Scarborough imagine he'll derive from his mind-numbing repetition? Are there voters out there who don't get that Scarborough sees the president as a fascist the first time he says it, or the fifth, or the tenth, but suddenly, the 19th time around, the penny drops, the scales fall away from the eyes, and the voter understands: oh, Trump's a fascist!

That seems entirely implausible. The law of dimini 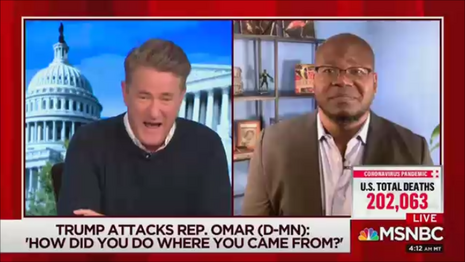 shing returns soon diminishes to the vanishing point. Indeed, it can be imagined that the tactic is actually counterproductive. If there are persuadable voters in the Morning Joe audience, round about the 15th repetition they could be persuaded that Scarborough and his ilk are kooks, whose political preferences are to be distrusted.

So, if Scarborough doesn't ride his hobbyhorse for political gain, what is his purpose? It might be suggested that he does it as a form of self-gratification. An exercise, you might say, in oratorical onanism.

Joe Scarborough's fascination with "fascist" was sponsored  by Fidelity, Dunkin' Donuts, and Verizon.