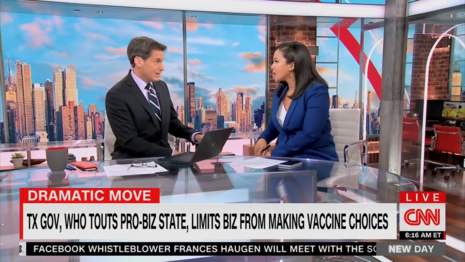 "Texas Governor Greg Abbott, who likes to brag about Texas being a pro-business state, he signed an executive order severely limiting the freedom of businesses to make their own choices."

Question: does anyone remember Berman or any CNNer calling out Democrat California Gov. Gavin Newsom for "limiting the freedom of businesses to make their own choices," when he advocated for and recently signed a law requiring big-box stores to create "gender-neutral" toy aisles? Neither do we.

CNN anchor Laura [daughter of Valerie] Jarrett then doubled down on double standards, expressing concern for churches that might want to establish a vaccine mandate. Jarrett twice suggested it would be "interesting" if a church mounted a legal challenge to Abbott's order, wondering how the Supreme Court would deal with it.

That is just too rich. When's the last time the liberal media ever expressed support for the rights of religious individuals and institutions to object on moral/religious grounds to government rules on anything from baking cakes, to adoption, contraception, abortion, etc? This sudden solicitousness for churches is the height of hypocrisy.

And by the way, Governor Abbott has reason to be proud of Texas's reputation as a business-friendly state. In the recent Forbes "Best States for Business," Texas comes in at #2. Newsom's California is down in the bottom half.

CNN's double standard on limiting the freedom choice of private businesses was sponsored in part by Carvana, Sleep Number, and Zales.

JOHN BERMAN: Developing overnight, Texas Governor Greg Abbott, who likes to brag about Texas being a pro-business state, he signed an executive order severely limiting the freedom of businesses to make their own choices.

Abbott banned any entity, including private businesses, from enforcing vaccine requirements on workers. CNN Early Start co-anchor and attorney Laura Jarrett joins us now. Is this even legal? Can he do this?

LAURA JARRETT: So, legally, this is really suspect and likely to get thrown out.

But he’s playing a really dangerous game. Kids are going to become sick and die because of this. And now, he's extending it to private business owners.

BERMAN: Also, it puts businesses in a bind.

JARRETT: Yeah! But it’s also pretty rich coming from, as you pointed out in your intro, a conservative who labels himself as pro-business, right? I mean, this is a private business owner. You’re telling them they can’t protect their workers.

BERMAN: They're going in the reverse, religious, entryway into that.

BERMAN: All right, Laura Jarrett here. And as we said, there are going to be major businesses that have an issue with this.

BERMAN: Other businesses that have a lot of workers in Texas. We’ll be watching this very closely.