On Wednesday, Morning Joe — in the persons of Joe Scarborough, Richard Haass, Anne Gearan, and Willie Geist — tore into Biden's mishandling of the cancellation of Australia's submarine-building contract with France in favor of one with the US.

But Biden had one, lonely, backer: Mika Brzezinski. She piped up throughout the long segment, doing her best to defend Biden. Brzezinski expressed doubt as to whether the US, UK, and Australia really went behind France's back. She said the situation isn't "black and white"—to which Scarborough shot back, "it is black and white." She suggested France should have known there was a problem with their subs. She claimed there was "more to the story."

At one point, Scarborough mocked Mika, saying, "I know you're doing your best," to defend Biden.

Among the blasts at Biden by the non-Mika members of the panel: 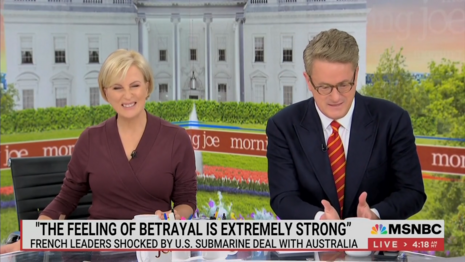 Check out the screencap of Mika grimacing while listening to the panel's indictment of Biden's botching! She ended the segment by repeating her belief that there is "more to this," and declaring that she would "go to the White House" and ask!

Note: There was a light-hearted moment. AP's Jonathan Lemire, responding to Scarborough's assertion that there needs to be a "make-good" to France from the US, said that France could be added into the sub-building partnership. That what has been called AUKUS [for Australia, UK, US], could be changed to FAUKUS.

Mika Brzezinski attempting to defend Biden's French sub fiasco while the rest of the Morning Joe panel blasted him was sponsored in part by Discover, Walgreens, and Liberty Mutual.

JOE SCARBOROUGH: How do you have [the French] on the outside of a conversation, and then they just learn suddenly that they’ve lost a $50 billion, $60 billion deal? That seems, seems, to say bush league.

MIKA BRZEZINSKI: Did it really happen that way?

SCARBOROUGH: It did. I think bush league is too high of a compliment for the way they handled this.

ANNE GEARAN: There was a failure here to inform the French early enough on, bring them on board in some other capacity. And prevent what really is an amazing breach. The ambassador has never been recalled from the United States until now. I mean, it didn’t happen under Donald Trump, right?!

LEMIRE: This new alliance: the Australian-UK-US alliance: AUKUS. Which some have said, add France to that: FAUKUS. Easy enough!

LEMIRE: I was careful!

SCARBOROUGH: Biden is talking to Macron, and on that same day— they’re talking in person—and he’s letting Macron say, thank God you’re here. Thank God this alliance is back where it needs to be. Thank God you actually give a damn about what your European allies think.

On that very day, they’re stabbing them in the back!

Can you imagine the outcry if Donald Trump had blundered this badly in dealing with an ally, stabbed them in the back like this, and broke off relations? I can’t. I mean, there would be howling from the mountaintops for six months. For good reason!

MIKA: Okay. We do have the reality of the subs, right? The reality, there were some issues.

MIKA: The French knew that. They weren’t completely blind to that, were they? I'm just saying: it’s not black and white.

SCARBOROUGH: It is black and white. If that's the case, you know what you do?

SCARBOROUGH: You talk to your ally. This is really -- I know you’re doing your best, but this is –

SCARBOROUGH: This is no defense.

MIKA: I feel like there's more to the story. That’s all.

RICHARD HAASS: It was simply totally, totally, mishandled. It's ironic, it happens right after Afghanistan, which was another Trumpian sort of mishandling of allied consultations. And then, it's really funny, then what did Joe Biden talk about at the U.N.? Relentless diplomacy. And the contrast between the words yesterday, and these two big problems with our oldest allies, can hardly be more stark.

MIKA: I'm not making a defense for it [actually, you are, if ineffectually so.] And I agree, China's the focus. But I, I just think there might be more to this. I will go to the White House and ask.