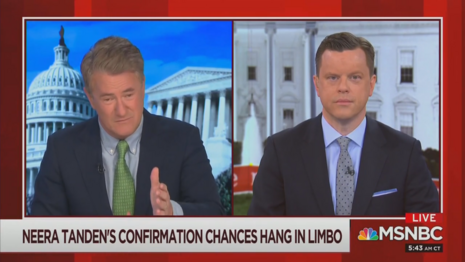 On Wednesday, Joe Scarborough offered no sympathy to OMB nominee Neera Tanden, whose nomination is struggling in part due to corrosive tweets.

Scarborough nodded to what he sees as hypocrisy in Republicans criticizing Tanden's mean tweets despite having stood by as President Trump so often took to Twitter to attack his opponents. But as Scarborough put it:

"You can tweet harsh tweets about people, or you can get nominated. I just, I don't think you can do both."

JOE SCARBOROUGH: This is Washington, DC, all right? I would not expect Mitch McConnell to support my nomination to any cabinet agency after calling him "Moscow Mitch" — and neither should Neera Tanden.

And when she compares a Republican senator unfavorably to a vampire. When she calls Susan Collins, who is in working coalition with Joe Manchin, "the worst," and that she should be "haunted for the rest of her days?" This is, this is not complicated, all right? This is Washington, DC.

You know what? You can tweet harsh tweets about people, or you can get nominated. I just, I don't think you can do both, and maybe that's hypocritical on the Republicans' part and Joe Manchin's part, but it's also, it's the way politics is, and the Biden administration certainly should understand that, and so should Neera.

The Morning Joe host also rejected the claim that racism and sexism are behind the rejection of Tanden.

Let me address the sexist and racist charges about Neera Tanden. Though I have been called a murderer 12 times by the President of the United States on Twitter, were I to try to get past the Senate based on tweets that I made over the last four years, I'm pretty sure this white, 6'4", Southern guy from Southern state schools would also not make the cut even if it was to mow the White House's lawn -- if that were, in fact, a Senate-approved position.

It sounds like Scarborough remembers his own mean routine about "Moscow Mitch." On one show in 2019, he repeated the insult 14 times (and Donnie Deutsch added another three times.)

PS: There was a light-hearted moment toward the segment's end. Scarborough, making an analogy, told Sam Stein that if someone had trashed him or others they respect, and then asked to come on the show, the answer would be no. Stein—who has been the butt of much good-natured ribbing on the show over the years—responded with a smirk: "I'm heartened to hear that you respect me. Thank you. It's been almost a decade." Chuckles ensued.

Joe Scarborough expressing understanding for the Senate's blocking of Neera Tanden's nomination was sponsored in part by Applebee's and Land Rover.