Scarborough Slimes Hawley: You're 'Most Responsible' for Cop Who Died After Riot

One of these days, someone's going to sue Joe Scarborough for slander, and win . . .

Scarborough has an ugly habit of promiscuously calling Republicans killers. This past October, Scarborough insanely said of President Trump:

"Nobody's ever done so much to kill so many people. That is correct. Nobody."

Back at his sick shtick this morning, Scarborough's target was Republican Senator Josh Hawley of Missouri. Said Scarborough of Hawley:

The accusation that Capitol cop Brian Sicknick died in a beating is now in doubt. "Exactly how Sicknick died still remains a mystery to the public, as an official cause of death has not been released," Fox News reported.

Scarborough in effect called Hawley a killer, but didn't bother to explain just what it was Hawley had done to merit the accusation. Was it raising his fist to the crowd, prior to the riot? Could it have been Hawley's exercise of his constitutional right to object to the Electoral College results—something that Democrats have repeatedly done in the recent past? Or was it the ex post facto crime of sitting in the gallery reading a magazine during yesterday's trial? 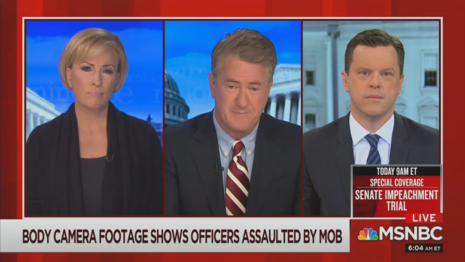 Note: it was that magazine-reading that put Mika Brzezinski in an emotional state [see screencap].

As public figures, President Trump and Senator Hawley would have to meet a higher standard of proof were they to sue Scarborough for slander. But the slander was so egregious, and so obviously untrue, that they would have strong cases. Even so, one doubts they'll bother to pursue the clearly-disturbed Scarborough.

MIKA BRZEZINSKI: Joe, I just want to know, as this played out for hours and hours and senators were listening to this and watching it, some of it for the first time. Can you imagine, can you imagine one of them sitting in the gallery with his feet up reading magazines or unrelated material during this unbelievable presentation of what happened to our US Capitol that day?

MIKA: That was Josh Hawley.

It is Josh Hawley who Mitch McConnell begged, begged to not do what he did. And it is Josh Hawley yesterday, as they're showing images of the Vice President of the United States and his wife and his children in danger. Capitol Hill police officers being killed, being beaten, being abused. The Capitol of the United States being overrun by savages, by animals. You look at those people in the body cam footage? Those were Trump terrorists...