MSNBC's Cross: Trump Like 'Ghetto' Residents Who 'Trash' Their House!

What the heck? If a conservative said something like this, he would likely be dragged off the set in real-time!

On her MSNBC show on Saturday morning, host Tiffany Cross denounced the president for delaying the COVID relief package to get more generous payouts:

The "ghetto?" Isn't that terribly un-PC speak? Isn't it, "inner city," or "urban areas?" And saying that neighbors "in the hood" tend to "trash the place" when their house is in foreclosure?? Doesn't that sound like the worst kind of racial stereotyping?? Or is it something that only black leftists can say?

Has Cross lost her mind, or, now with her own MSNBC show, does she somehow feel entitled to employ terms and stereotypes that would get a person of pallor banned before you could say "cancel culture?" 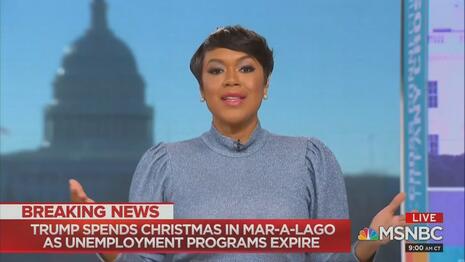 Note: Cross made her remark to far-left Congresswoman Barbara Lee of California.  You might have expected Lee to reprimand Cross for her negative stereotyping of "ghetto" residents.

But nope: just a "really happy to be with you" from Lee. Guess she didn't want to upset the apple cart. You can't imagine Lee would have given a conservative a similar pass.

TIFFANY CROSS:  Unemployment benefits run out today. That will impact 14 million people and their families, but what else is at risk? Well, there's also eviction protections, emergency aid, and on Monday the government is set to shut down.

The expiration of unemployment benefits alone will push five million people into poverty. And all week you’ve been hearing about this bill that Congress sent to the president and can bring at least some of this uncertainty to a screeching halt. But Donald Trump has yet to sign it. While House Republicans have blocked attempts to increase the stimulus payments in the bill from $600 to $2,000, which is what Donald Trump claims he wants.

And while people’s lives and livelihoods hang in the balance, where are the country’s top two executives? Well, Trump is in Palm Beach and Mar-a-Lago and Mike Pence is reportedly in the slinky ski town of Vail, Colorado. Joining me now to discuss this and more is Congresswoman Barbara Lee of California. Congresswoman, I’m so happy to have you with me.