On a day when the new Harris/Hill poll shows Biden's lead cratering to three points, the liberal media might want to focus on trying to push poor Ol' Joe over the finish line.

Instead, on today's Morning Joe a seemingly cocksure Joe Scarborough, riffing off the executive orders that President Trump signed over the weekend, predicted that for "quite some time" there will be a "line" of Democrat presidents, explicitly including "President Kamala Harris." For good measure, Scarborough also foresaw Republicans being in the minority for a "generation."

JOE SCARBOROUGH: And they’re so short-sighted that they don’t realize that they are going to have a generation in in the minority to think about all the mistakes they made while Trump was president, and all the precedents that they set for the line of Democratic presidents who are going to be elected after this fall.

When it comes to political prognostication, Scarborough has much to be modest about. This is the same Swami Scarborough who not long before the 2016 election proclaimed that Donald Trump "knows he's going to lose," adding that he believes that "without a doubt." 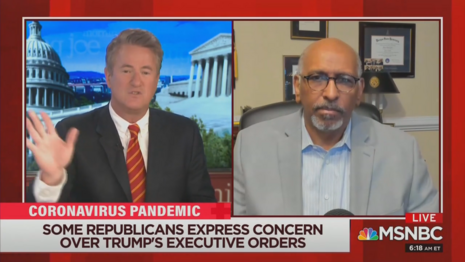 So, rather than making bold predictions stretching out a generation, perhaps Scarborough should confine his energies to the considerable task at hand: somehow managing to drag to victory a candidate who threatens to implode at any moment in a muddle of his own confusion.

Question: how do you think Biden is reacting to hearing people already speaking of "President Kamala Harris?" Kind of like being a spectator at your own funeral.

Scarborough's prediction of a future "line" of Democrat presidents was sponsored in part by Choice Hotels and Liberty Mutual.

JOE SCARBOROUGH: Michael Steele, let’s step back for one second and take a look at this and realize what Republicans are doing here. They are setting a precedent — and you know, they’re so short-sighted, because they’re thinking that Donald Trump is going to be president forever.

And they’re so short-sighted that they don’t realize that they are going to have a generation in in the minority to think about all the mistakes they made while Trump was president, and all the precedents that they set for the line of Democratic presidents who are going to be elected after this fall.

Because if you look at the demographic changes, you look at the Republican party in disarray, I think there are going to be Democrats elected to the White House for quite some time. And what have they done? They have so undermined their position as legislators by deferring time and time again to Donald Trump’s unconstitutional power grabs, that as the Wall Street Journal said in that editorial, they’re giving future President Kamala Harris all the excuses that she needs to do something on abortion, to do something on gun laws, to do something on whatever they think they’re the most afraid of, she can just do a presidential directive and say, Donald Trump did it, Ted Cruz said nothing about it, I’m good.

MICHAEL STEELE: Yeah, this is the constitutional slop that Ben Sasse referred to.