'Their Skin Is Crawling': Mika Says MSM Can't Be Objective About Trump

Mika Brzezinski has let the cat out of the MSM bag. On today's Morning Joe, Mika admitted that the press corps covering Donald Trump can't be objective about him: "it's like their skin is crawling."

Brzezinski said reporters "ooze with a lack of objectivity" when covering Trump, adding "you can sort of see it in their kind of like smiling, sort of slyly and uncomfortably and almost snarkily while they're reporting on his rallies." Of course, what is true about MSM coverage of Trump has been true of the way the liberal media covered many Republicans.  Does anyone think, for instance, that the MSM gave a fair shake to Mitt Romney or George W. Bush?

Mika's comments came toward the conclusion of an extended commentary [rant] by Joe Scarborough about Nate Silver. Joe's point was that in 2008, Silver was the great proponent of supposedly cold, hard data that pointed to an Obama victory, and that liberals loved it. But now, Silver seems to be saying that data aren't so cold and hard, and although poll numbers would surely seem to point toward Trump winning the nomination, Silver is hedging his bets with more subjective analysis.

MIKA BRZEZINSKI: Reporters are supposed to be [air quotes] objective. And they ooze with a lack of objectivity when they're covering him [Trump].

MIKA: You can sort of see it in their kind of like smiling, sort of slyly and uncomfortably and almost snarkily while they're reporting on his rallies. Cause they can't take him seriously. They can't say, you know what? There are a lot of people who would say that this could be a very dangerous statement, but if you would look at the crowd behind us, this is exactly what they want to hear. They can't even say that with conviction. They just can't do it. It's like their skin is crawling. 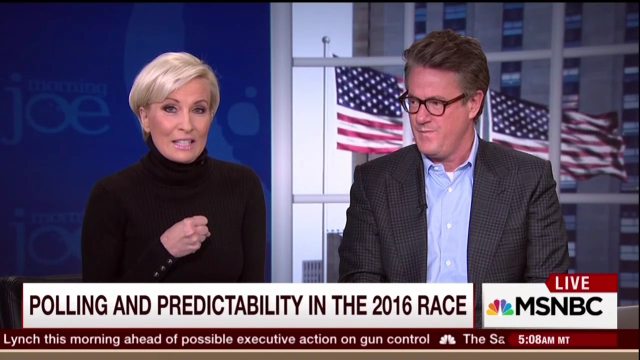