Harris-Perry's Fetal Indifference: What It Costs To Have 'This Thing' Turn Into A Human

UPDATE:  For a brilliant, clear and concise takedown of Harris-Perry's comments, have a listen to the analysis of Dr. R. Albert Mohler, Jr., President of The Southern Baptist Theological Seminary, in this podcast.  The discussion comes about 8:25 in and lasts about five minutes.

. Melissa Harris-Perry is clearly a member of the "blob of cells" brigade when it comes to her disregard for unborn human life.  On her MSNBC show this morning, MH-P repeatedly revealed how little respect she has for life in its early forms.

At one point, Harris-Perry callously spoke of how much it costs "to have this thing turn into a human." H/t NB reader Ray R. View the video after the jump. 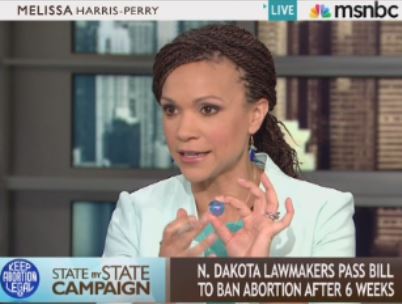 Watch as MH-P makes light as she accidentally breaks a model of a fertilized egg, claims there is no science supporting the notion that life in its early forms could be considered a person, and dismissively refers to that early life as "this" and "this thing."  You really have to watch and listen to hear the dismissivness, the virtual contempt, with which MH-P speaks of "this thing."

MELISSA HARRIS-PERRY:  Oh, no. That might be bad. I seemed to have popped open the fertilized egg. We'll put that back together. But the very idea that this would constitute a person, right? And that some set of constitutional rights should come to this.  Look, I get that that is a particular kind of faith claim. It's not associated with science. But the reality is that if this turns into a person, right, there are economic consequences, right? The cost to raise a child, $10,000 a year up to $20,000 a year. When you're talking about what it actually costs to have this thing turn into a human, why not allow women to make the best choices that we can with as many resources and options instead of trying to come in and regulate this process?