Shades of "Special Comment"!  In a rant worthy of Keith Olbermann at the height of his Miss Precious Perfect histrionics, Mika Brezinski began today's Morning Joe by tearing into Newt Gingrich for his recent suggestion that Occupy protestors should "get a job, right after you take a bath."

It wasn't merely Mika's words: "arrogant, disgusting, sickened."  So strongly ran Brzezinski's rage that more than once her voice quavered and she seemed on some sort of emotional brink.  Video after the jump. 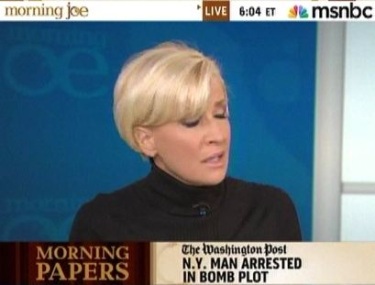 Watch Mika on the brink.  After the show opened with a clip of Newt making his "get a job, take a bath" remarks, Mika proceeded to unload.

MIKA BRZEZINSKI: Wow. It's really not surprising, coming from me, but that's about the most arrogant and un-self-aware, and those are probably the only words I can use [inaudible] for any politician in this Republican field to say.

SACHS: Absolutely disgusting.  No sense of any meaning at all of this.  Absolutely revolting, actually.  And especially when what they're protesting against is the incredible abuse of power, the criminality on Wall Street and so forth that he--he has taken his millions of dollars.  It's shocking!

BRZEZINSKI: Someone needs a bath, and I don't think it's the people from Occupy Wall Street. That's all I'm going to say.  I've got nothing else. I'm so disgusted by that that something horrible is going to come . . . I, I, am I alone here? Am I over-reacting [note quavering voice]? I'm sickened by that . . . It's fair to say he's in the 1%, correct? He's telling the 99% to take a bath and get a job?  Really? Really, I wonder how they do that right now. How, given the state of this country, how anyone's going to just get a job and take a bath. Who is this man?  Who does he think he is? And why is he surging in the polls? I don't get it.  I mean,to hear Newt Gingrich standing on literally his high horse, after taking advantage of the system, cashing in, being the biggest, literally the biggest hypocrite in the Repubican field, probably in politics today.  The biggest hypocrite.  And then to cast aspersions and to speak down to these people as if--plghhh--they should be flipped away? It's disgusting.  It's absolutely disgusting.  It's a very angry way to start the show. I'm extremely sorry.  But it's the first time I'd seen that.  And it literally made my skin crawl.  I can't believe he resonates.

Note: Brzezinski began her rant by declaring "it shouldn't be surprising, coming from me."  That was presumably an allusion to her frankly acknowledged personal animus toward Gingrich, apparently stemming from an incident in which Newt had insulted Mika's father Zbigniew Brzezinski as Jimmy Carter's former National Security Adviser sat in the audience.

Note Deux: at one point Mika speaks of Gingrich standing "literally" on his high horse.  Newt the equestrian daredevil: who knew?