H/t MRC's Jeff Poor. I urge people to read the blog entry that Jackie Seal, the impressive young lady that O'Donnell confronted, has written about her experience.  Not only does it provide fascinating background material about just what a set-up O'Donnell devised, it also catches Norah out in a fib.

As you'll note from an earlier update at the foot of this item, after O'Donnell began catching heat for her stunt, she went back on the air to defend herself.  Among other things, responding to charges she had confronted a young girl, O'Donnell twice claimed that her interview subject "voted in the last election."

Just one problem:  Jackie informs us that she is . . . 17.  Maybe Norah got confused with ACORN voting standards, but 16-year old conservatives [the age she would presumably have been at last year's election] don't go to the polls.

We all remember how back during the '08 campaign, MSM reporters would challenge people attending Obama rallies with uncomfortable truths about their candidate, along the lines "would you still support him if you knew he had the most liberal voting record in the Senate?" Or not.  I certainly can't remember any MSMer confronting an Obama supporter in such a way.

But let people line up to express their admiration for Sarah Palin . . .

NORAH O'DONNELL: Tell me your name?

O'DONNELL: Jackie? You have been out here. Show me your t-shirt. Tell me what it says.

JACKIE: The U.S. government handed out $700 billion in Wall Street bailouts and all I got was this lousy t-shirt.

O'DONNELL: Did you know that Sarah Palin supported the bailout?

O'DONNELL [reading from notes]: During the campaign, John McCain brought everyone to Washington, praised the bailout and Sarah Palin, during the debate, the vice presidential debate, praised John McCain for bringing folks together to pass the bill and said it is a time of crisis in government. That it's time to step in. So, Sarah Palin was for the bailout.

JACKIE: You think she was. I think if you asked her today, she was not for the bailout.

O'DONNELL: The reason I ask you, I think it was -- there's some confusion about Sarah Palin's policies and that's yes ask you that she is against the stimulus but during the campaign, she was for the bailout, as was John McCain. Does that change your view?

JACKIE: No, it does not.

When O'Donnell threw it back to David Shuster and Tamron Hall in the studio, a condescending theme emerged among them essentially portraying Palin supporters as mind-numbed robots.

DAVID SHUSTER: NBC's Norah O'Donnell in Grand Rapids, Michigan, Norah, great work, so intriguing to hear them and we appreciate it. Tamron, you know, there is people who like Sarah Palin, like everything, there is a lot of misinformation that people have and it does not matter. 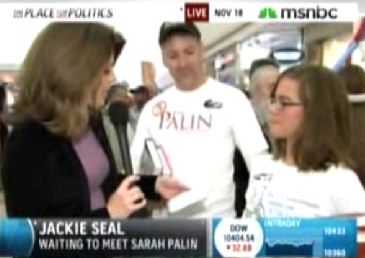 UPDATE: NewsBuster Scott Whitlock notes that O'Donnell addressed the controversy this afternoon at 3:33 PM on MSNBC:

O’DONNELL: Well, her name was Jackie Seal and she voted in the last election, not 13 years old as some have suggested. And it is important to point out that when I walk and talk to a bunch of people up and down the line, I say “Who wants to talk on camera?” Some people say, “I don't want to talk.” They’re not ready to talk. Some people say, “I want to talk, So, I walked down and met that man who had the shirt that said Palin for president on it. And I said, “Is there a woman who will come and talk about Sarah Palin?” And he grabbed that woman and pulled her over. So, I did not choose that woman, it just so happens she had a shirt on and was confused about Palin's position on the issues. I think that is important to point that out. We do it with both sides of the aisle, sometimes people are connected to a politician or someone but know very little about them on the issues. This book wouldn't tell you about the issues, it requires reading. It requires examination. And so I think that that was a reflective moment in terms of finding out just how much people are either confused about the issues or didn't know about the issues. But, it is important to point out everybody we interviewed volunteered and that case, a previous voter and not 13 years old.

"We do it with both sides of the aisle?"  Really? I'd love to see Norah run footage of her confronting an Obama supporter like that during the '08 campaign.