If Rod Blagojevich were a Republican, what's the over-under on the number of times the network morning shows would have mentioned that fact in their coverage today?

But Blago is a Democrat.  So how often did Today, Good Morning America and the Early Show explicitly identify him as such during their opening half-hours today?  Not once.  The closest any came were references at Today and Early Show today to "Democratic politics" and one at GMA to "the Democratic Chicago machine."  Speaking of GMA, George Stephanopoulos, appearing there, put in the most embarrassingly sycophantish performance of the morning.

Today: In the opening segment, Meredith Vieira simply referred to "Illinois Governor Rod Blagojevich."  Nor did the D-word ever cross Matt Lauer's lips. Lee Cowan, reporting from Chicago, never got around to identifying Blago by party.  Nor did Blago's Democrat-hood ever arise when Lauer kicked the criminal case around with Dan Abrams [who could use a Gillette razor for Chanukah.]  Chatting with Meredith Vieira, Chuck Todd came closest to identifying Blago's affiliation, saying "the problem that Obama has is that Chicago Democratic politics has a lot of concentric circles. There's some overlap here. It's possible one of Obama's advisors is going to be on tape."  Let's hope the NBC News political director doesn't get into hot water for violating the network blackout.

The Early Show: Maggie Rodriguez opened the show making reference simply to "the Illinois governor." Julie Chen was also too polite to use the D-word, speaking only of "Illinois Governor Rod Blagojevich."  Dean Reynolds, reporting from Chicago, was similarly well-behaved.  In the following segment, Chip Reid did say "Barack Obama and Rod Blagojevich have both been leaders in Illinois Democratic politics for years."  But the CBS correspondent hastened to add "long-time observers say that's about as far as the connection goes."

None of the nets mentioned that close connection.

Good Morning America:  None of the anchors breathed the D-word, but reporter Jim Avila did speak of "a president-elect and a governor with roots in the Chicago Democratic machine." George Stephanopoulos went out of his way to downplay the Obama-Blago connection.  Tape was rolled of Obama correcting himself in mid-sentence saying "I had no contact with the governor or his office. And so we, I, was not aware of what was happening." When Diane Sawyer asked about the switch in pronouns, Steph gave the most benign possible explanation for Obama's sleight of tongue:

I think that's because he can't be sure that no one connected to him in any way spoke to Blagojevich or any emissaries of Blagojevich.

Wouldn't another explanation be that Obama is dead sure that someone connected with him did speak with Blago or his minions? But that would have so impolite to suggest. For complete coverage of the Sawyer-Steph exchange, see Scott Whitlock's item here.

I ask: had the political tables been turned, how often and how prominently would the nets have explicitly mentioned the party affiliation of a Republican caught in a comparable mess?

It was a different story over at Morning Joe, where throughout today's show Joe Scarborough was all over the media double standard.  In the opening segment he cited Tucker Carlson's description of the sycophantic media having a 9th-grade schoolboy crush on Obama as it proclaims about the Blago matter: "nothing to see here. Move along."

And a bit later:

Here's the deal. If Karl Rove had said George Bush has never talked to 'x' then -- or George Bush talked to 'x' and denies it, people would be screaming and yelling from the top of this building and other every media building in the nation. It's the same thing with Rahm Emanuel, chief of staff, saying Barack Obama ran Rod Blagojevich's campaign along with him in 2002. Then come back and deny it

Update: Is Obama Sure He Never Met With Blago On Senate Seat?

Now that Barack Obama will be moving to the White House, his seat in the U.S. Senate representing Illinois will have to be filled.

Obama met with Governor Rod Blagojevich earlier this week to discuss it. 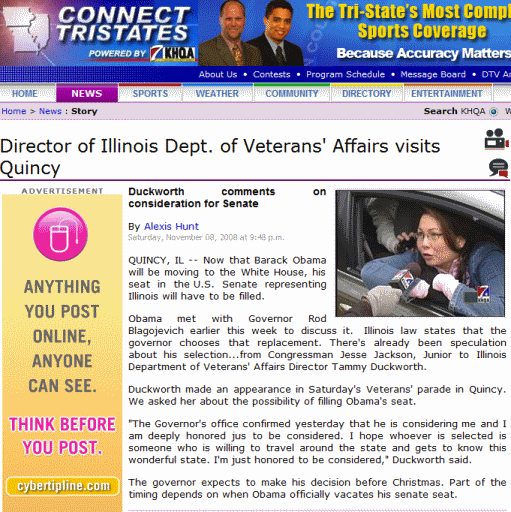