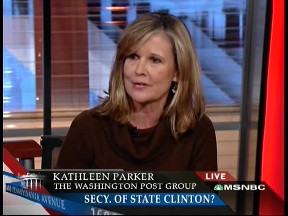 Before a few weeks ago, I don't recall seeing Kathleen Parker much on TV.  But tuning into Andrea Mitchell's MSNBC show this afternoon, there she was.  And when I got back from the gym and fired up my DVR of David Gregory's "1600 Pennsylvania Avenue?"  Yup, Parker redux.

Let's see.  What might possibly explain Kathleen Parker's sudden popularity on MSNBC?  You don't suppose it could conceivably have anything to do with her September column calling on Sarah Palin to step down from the GOP ticket, do you? 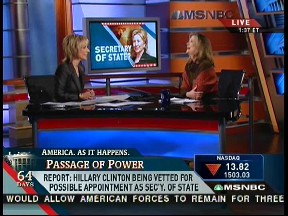 For the record, I found Parker, in her appearances today, well-spoken, thoughtful and appealing.  This isn't a knock on her so much as confirmation that the best way for a conservative to become popular in MSM circles is to start taking shots at fellow right-of-center travelers.

I'm sure I recall that in the wake of  the criticism she took for her column calling on Palin to step down, Parker wrote in her own defense that she was never one to seek TV appearances and had turned down many such invitations.  I can't seem now to find where Parker said that and would be grateful to any reader who could point me in the right direction.
Appointments Media Bias Debate Campaigns & Elections 2008 Presidential Sudden Respect MSNBC Kathleen Parker Sarah Palin