Matthews: My Job Is To Make Obama Presidency a Success

Just in time for the new James Bond movie, Chris Matthews has earned himself a new moniker: Odd Job. Matthews says he sees his job as a journalist as doing everything he can to make the Obama presidency a success.

Appearing on "Morning Joe" today, Matthews was reluctant to criticize Rahm Emanuel's kabuki dance over accepting Obama's offer to be chief of staff.

The "Hardball" host (and presumptive candidate for U.S. Senate from PA) was equally unwilling to see the Emanuel episode as evidence of a lack of planning and discipline in the nascent Obama administration. Matthews eventually explained why.[H/t multiple NB readers.]

CHRIS MATTHEWS: Yeah, well, you know what? I want to do everything I can to make this thing work, this new presidency work, and I think that --

JOE SCARBOROUGH: Is that your job? You just talked about being a journalist! 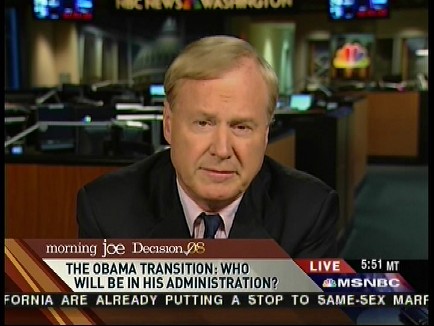 MATTHEWS: Yeah, it is my job. My job is to help this country.

Matthews wasn't done with his odd new job description . . . An incredulous Scarborough kept pressing, astonished at such a complete 180 from Matthews's repeated insistence during the Bush presidency that he had to hold the government accountable.

SCARBOROUGH: Your job is the make this presidency work?

MATTHEWS: To make this work successfully. This country needs a successful presidency.

Matthews will hardly be alone in that sentiment. Once Obama assumes office, the "speaking truth to power" line we've heard so often during the past eight years will be a thing of the past.