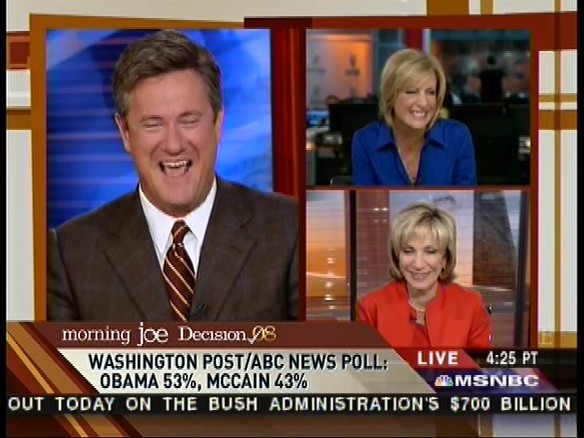 On what should be the crowning day of his professional career, one hopes for his sake that Paul Krugman wasn't watching Morning Joe.  For news of his economics Nobel was met by the crew with ridicule that even Mika Brzezinski couldn't resist.  Andrea Mitchell tried to uphold the Krugman honor, but—as seen in the screencap—even she couldn't suppress a smile at the award's arrant absurdity.

Joe Scarborough piqued Mika's curiosity with his teasing of the news, while guest Jim Cramer saw the award as confirmation that America is well on the way to socialism.

JOE SCARBOROUGH: Andrea Mitchell gave us some news from her Blackberry.  And I'm describing this, not Andrea, but it is the most horrific news I think I have heard in some time.  Was that a joke email or is it the truth?

ANDREA MITCHELL: I don't think so --

MITCHELL: -- it's the New York Times on my Blackberry.  [And what better source in Andrea's book?]

BRZEZINSKI: What, what, what??

SCARBOROUGH: It's got to be a lie. This is serious?

MITCHELL: This is for the work he did, presumably, at Princeton as an economist, not as a --

SCARBOROUGH: Paul Krugman—this is just grimmest news I've heard in quite some time—has been awarded the Nobel Prize for Economics!

Joe fought through his laughter to make the announcement, as Mika and Mitchell couldn't help but join in the joviality. 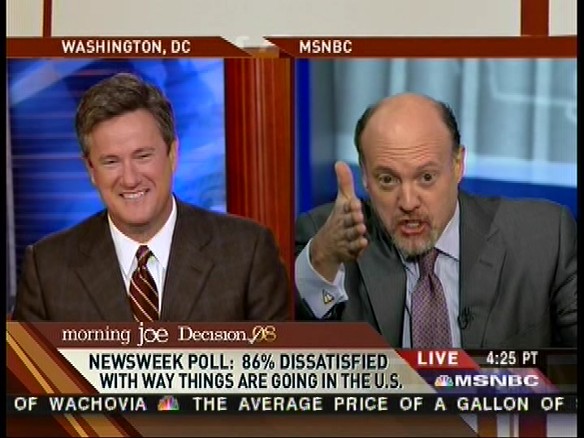 SCARBOROUGH: I can't even say it with a straight face.  Let's bring in Jim Cramer, host of CNBC's Mad Money and author of Cramer's "Stay Mad" book. Jim, is this a joke?

JIM CRAMER: Well look, Soros is now running the banking system, so why not let Krugman be the Nobel laureate?  I mean, think about it --

SCARBOROUGH: Seriously: what a joke!

CRAMER: -- the left has taken over your great country.  You're completely marginalized.  We are now Eugene V. Debs, Part II.

CRAMER: We just don't want to teeter to Communism.

Andrea did her best on Krugman's behalf.

MITCHELL: Wait a second, let me just say, before Paul Krugman was a New York Times columnist, he was—still is—a Ph.D. economist at Princeton.  So, I haven't read the full announcement from the Nobel committee, but that is presumably it.

Can Mitchell seriously believe this was other than a supremely political pick by the lefty Nobel Committee?  Does Andrea honestly imagine Krugman was awarded the prize for his academic work and not for his Republican-bashing and promotion of the road to collectivism on the pages of the Gray Lady?  Don't make us laugh!

Note: According to the official Nobel announcement, Krugman was awarded the prize for "his analysis of trade patterns and location of economic activity."   Right.