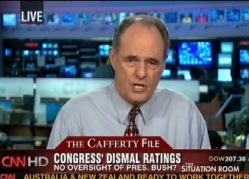 You might call Jack Cafferty the Dennis Kucinich of the media. Actually, the CNN commentator would go the Dem congressman one better.  Not content with mere impeachment, Cafferty has condemned Congress for not pursuing the possible prosecution of President Bush—to whom he sneeringly refers as "King George"—for war crimes.

The CNN commentator put war-crime prosecution on the table during his Cafferty File segment on this afternoon's CNN "Situation Room."

JACK CAFFERTY: A new Gallup poll shows Congress's approval rating: 14%; the lowest it's been in 30 years. One of the reasons has got to be the legislative branch's refusal to exercise any sort of oversight on the executive branch of government, which they are specifically charged in our Constitution with doing.

Meanwhile, Congress bowed to King George's demands: passed that new FISA surveillance bill. Patted themselves on the back big-time, too. But they never did anything about the breaking of the law that occurred during the old FISA law. They continue to approve more money for the war in Iraq, most recently another $162 billion, no strings attached, despite promising—remember this?—to cut off funding for the war in 2006.

A new book titled The Dark Side, by New Yorker writer Jane Mayer, suggests top administration officials, including President Bush, Vice-President Cheney, Don Rumsfeld and others, may be guilty of war crimes.  But Congress has chosen to look the other way. A good lawyer might be able to make the case that Congress has been criminally negligent.

Here's the question: why does Congress continue to allow President Bush to get away with so much?  Go to CNN.com/CaffertyFile; you can post a comment on my blog. 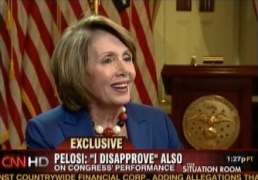 During the course of the Situation Room, host Wolf Blitzer played a number of excerpts from his recent interview of Speaker Nancy Pelosi, including this morsel.

WOLF BLITZER: Here is what President Bush said on Tuesday about your leadership—not just you personally, but the Democrats leadership in Congress.

Cut to clip of President Bush: "There are just 26 legislative days left before the end of the fiscal year.  This means that to get their fundamental job done, Congress would need to pass a spending bill nearly every other day.  This is not a record to be proud of, and I think the American people deserve better."

BLITZER: Do you want to respond to the president?

NANCY PELOSI: Well, God bless him, bless his heart, the President of the United States, a total failure, losing all credibility with the American people on the economy, on the war, on energy—you name the subject.  And for him to be challenging Congress, when we are trying to sweep up his mess, over and over and over again.

And they say the spirit of bi-partisanship is dead!