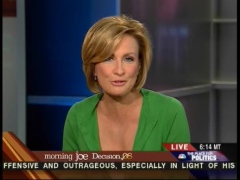 The big story this morning is President Bush's remarks to the Israeli Knesset invoking the example of Hitler to warn against the appeasement of Mahmoud Ahmadinejad. In the opening segment, from Mika Brzezinski [subbing as host for Joe Scarborough this week] to Willie Geist to Pat Buchanan to Mike Barnicle to David Shuster, nary a word in defense of Bush was heard, with Shuster twice referring to Bush's remarks as "grotesque." The only slight straying from Bush-bashing orthodoxy was Barnicle's observation that when he first heard of the remarks, he took them as aimed at Jimmy Carter, not Barack Obama.

A show purporting to have any semblance of balance would surely have a defender, if not of Bush, then at least of John McCain [who has reacted approvingly to Bush's comments] as a subsequent guest on today's show. Well, here's the guest lineup that Mika announced:

Joe Scarborough, where are you? Is this the kind of "fair and balanced" show that breaks out in your absence?

Update | 7 AM: John Harwood of CNBC/NYT came in as an unannounced guest after the first break, and from what I saw of the segment played things down the middle, mentioning among other things that the Republicans are willing to take some hits on this in return for being able to "shape the contours" of the campaign and move the debate from domestic to foreign policy issues, where they are stronger. But Harwood was surely no partisan Bush backer in the way the announced lineup is composed exclusively of anti-Bush partisans. Harwood also took the opportunity to tout the new book he has co-authored with Gerald Seib.

Update | 7:20 AM LOL. Shuster tried to repair the damage done by Harwood, claiming the CNBC correspondent "got a little bit off the track" when he suggested that Republicans would be seen as "stronger" on national security. "No," corrected Shuster, "they may be seen as more aggressive" but not stronger. For good measure, Shuster referred to Bush's Knesset remarks as "one of the more idiotic statements we've ever heard from President Bush."

Update | 8:10 AM More "balance." Jamie Rubin, a Clinton foreign policy advisor, came on as another guest Mika hadn't announced at the top of the show. He hammered McCain for alleged hypocrisy and flip-flopping for his stance on talking with Hamas. Rubin has a column in today's WaPo on the subject.