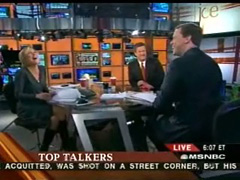 A conservative comedian [yes, there are some], appears at a venue in a heavily-white suburb at a campaign event for a white candidate and tells his audience composed overwhelmingly of people of pallor they'd be embarrassed if they supported a black candidate and the white candidate won, saying "Oh no. I can't call him now. I had that black guy. What was I thinking?"

What are the odds the MSM would laugh it off?

But when Chris Rock does the equivalent on behalf of Barack Obama, the MSM raises nary an eyebrow. Rock appeared last night at an event for Barack Obama at Harlem's famed Apollo Theater and said:

"You'd be real embarrassed if he won and you wasn't down with it. You'd say, 'aw man, I can't call him now. I had that white lady. What was I thinking?'"

So how did the Associated Press play it? Rather than focusing on Rock's statement, the headline of its article refers to incidents of anti-black racism: "Obama Deplores 'Jena Six,' Nooses." As for Chris Rock's line, the AP noted only that he "cracked up the audience with the evening's only direct reference to Hillary Rodham Clinton."

The Morning Joe crew was similarly unfazed. After playing the clip of Rock's line during the opening of today's show, either host Joe Scarborough or panelist Willie Geist [couldn't quite tell from the video] observed "that's funny." Perhaps experiencing a bit of a qualm, Scarborough added "kinda." But neither of the other panelists qualified their enthusiasm. "Chris Rock is a very funny man," said Willie Geist. "He's hilarious," enthused Mika Brzezinksi, erupting in the laughter caught in the screencap.