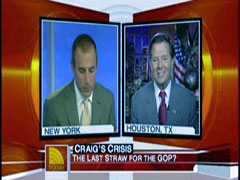 It's rare to see a leading MSM light directly confronted over the liberal media's bias. But it happened in spades this morning as Tom DeLay (R-Texas) called out Matt Lauer on the MSM's double-standard in handling Republican, versus Democrat, scandals.

The "Today" co-anchor opened his interview of the former Republican congressman and Majority Leader with a laundry-list of GOP scandals.

MATT LAUER: By all accounts these are some tough times for the Republican party. Last fall Democrats took control of both houses of congress, largely because of opposition to the war in Iraq. In 2006 the Republican party was also hit with distracting scandals involving Congressman Mark Foley's inappropriate emails to male congressional pages and lobbyist Jack Abramoff's corruption case that brought down several prominent Republican congressmen. This year the phone number of Republican senator David Vitter turned up in the records of a Washington, DC escort service, and now recent polls show voters prefer a Democrat over a Republican by 51-27% and at least one poll found the most popular choice among Republican presidential candidates is "none of the above." The question now is can any of the damage be reversed? Former House Majority Leader Tom DeLay served in congress for 22 years and knows personally how scandals can impact a party. He's also the author of a new book called No Retreat, No Surrender: One American's Fight. Tom DeLay, congressman, good morning.

LAUER: So I went through a litany there, and maybe I should start by stepping back. We've got two members out of 49 Republican senators in office right now embroiled in controversy. So do we have a party embroiled in scandal or do we have two bad apples?

DeLay wasted no time in confronting Lauer with his bias.

DELAY: Well, I hate to say this Matt, but you just showed the problem, the double-standard, and you just participated in it. You listed a whole lot of scandals that involve the Republicans but you didn't mention one Democrat.

In response, and throughout the ensuing exchange, Lauer clung to the fig leaf of his "bad apple" query.

LAUER: But you didn't hear me. I also just said do we only have two bad apples or is there a case of an entire party embroiled in scandal?

DELAY: I think in your premise if you had listed all the Democrats that are having problems right now it would have been different. You see the Democrats re-elect the people with their problems; the Republicans kick them out. If you look at what's going on, it's how you handle it as a party and as a political group.

DELAY: The double-standard in the media is amazing. The feeding frenzy, the sharks in the water that's going on right now because of a Republican. Where is the frenzy on Alan Mollohan from West Virginia or William Jefferson from Louisiana?

DELAY: Yeah, for just a couple of days and then we went on. In the case of a Republican, believe me I've experienced this, it's day in and day out in the media, and they write this story over and over and over again. We all know the double-standard in the media -- it's amazing.

LAUER: I'm not going to let it, you know, end with that assumption, congressman, because I clearly don't agree with it, but why don't we just say . . .

DELAY: You exhibited it, Matt!

LAUER: You know what, congressman? I think it's unfair. Because I listed a list of problems and then immediately --

LAUER: Well we're talking about the Republican party. You just said, I invited you on to talk about the GOP.

DELAY: Because you don't want to talk about the Democrats.

LAUER: And I also started, congressman, and then said "is this a misperception that there is a party embroiled in scandal when we may just have two bad apples?" That's exactly how I started my first question.

DELAY: No, you started the first question by listing a bunch of Republicans and didn't mention one Democrat.

DELAY: About the situation that's going on in Washington today and including both Democrats and Republicans. There are scandals that need to be addressed. Republicans address them, Democrats re-elect them.

LAUER: Alright congressman, I'll let you have the last word. It's good to have you on. 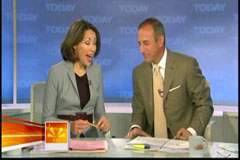