In 2007, Senator David Vitter was implicated in a prostitution ring involving the infamous “D.C. Madam.” Since then the senator apologized to his wife and family as well as the citizens of Louisiana, who, apparently, forgave him, as attested to their reelecting him to the U.S. Senate.

But that didn’t stop The Times-Picayune from publishing a story recently which selectively quoted from Family Research Council president Tony Perkins --  himself a former Republican member of the Louisiana House of Representatives -- in such a way as to suggest that the "far right" -- their words -- social conservative leader was opposed to Vitter's candidacy.

Well, he’s at it again. The Daily Beast’s Michael Tomasky posted yet another anti-Republican rant when he declared today that Senator David Vitter (R-La.) was “America’s most contemptible Senator.” Vitter announced that he will run for governor of Louisiana in 2015 and the Beast's teaser headline seethed with contempt, "Vitter slithers back to Bayou.”

Tomasky seemed to have an unusual amount of contempt and disgust for Vitter in his January 22 piece. Tomasky began his Vitter hit piece with an anecdote from an unnamed Democratic Senator, who said “on the S.O.B. factor the senator’s response was immediate: David Vitter.”

On Thursday's All In show on MSNBC, host Chris Hayes charged that Senator David Vitter has found "another way to screw poor people" as he complained that the Louisiana Republican has proposed a photo ID requirement for food stamp recipients.

Hayes brought up Vitter briefly after fretting that new voting rights legislation would not address voter ID requirements and would not ensare as many states for scrutiny as the original Voting Rights Act.

Perhaps the most frustrating aspect of this government shutdown has been the inability of the average person to get a handle on what's really going on.

Outfits like the network evening news shows, the Associated Press, the New York Times and others compose their spin, and almost invariably tilt their coverage towards the Obama administration and Democrats; developments favoring the GOP and conservatives, if mentioned at all, get washed away. Two examples from today of shutdown settlement ideas President Barack Obama rejected will prove the point.

'Morning Joe' Spends Hour on Weiner Scandal, Never Once Calls Him a 'Democrat'

MSNBC’s Morning Joe spent nearly half of their Wednesday program covering the latest revelations in the Anthony Weiner scandal, yet never once mentioned that the disgraced former congressman and New York City mayoral candidate is a Democrat. The panel was extremely critical of Weiner and his candidacy, but apparently did not consider the candidate’s political affiliation to be of any importance to the story.

But while the (D) label was never applied to Weiner – save for one graphic showing a Democratic primary poll – the MSNBC show did have time to squeeze in two partisan labels – one for Republican Senator David Vitter and one for Democratic Congressman Barney Frank, in a round-up of other scandal-scarred politicians. In that same round-up, Democrat Bill Clinton was, like Weiner, not labeled.

MSNBC's Hayes: 'GOP's Jihad on Those in Need Gets Uglier Every Single Day'

On Wednesday's All In show, MSNBC host Chris Hayes again claimed that House Republicans are waging a "jihad" in trying to cut the food stamp program, asserting that "the GOP's jihad on those in need gets uglier every single day."

The MSNBC also fretted again over the possibility that violent felons may lose benefits while MSNBC contributor Joy Reid tried to link racism against minorities to the battle over food stamps. Reid:

On Friday's All In show on MSNBC, host Chris Hayes recounted the recent activities of several Republican political figures which he regarded as examples of GOP members "being jackasses," and coined the Hayes-ism "jackassery" as he used some variation of the word "jackass" 11 times during the segment. After teasing the show, the MSNBC host immediately got to attacking Republicans:

CNN Anchor Goes Personal on Vitter; He Says 'The Good News Is...It's Not Up to CNN' to Pick GOP Nominee

Bill Clinton has done hundreds of TV interviews since leaving office in 2001, and journalists have very rarely found it appropriate to revisit his sex scandals. But for CNN, Republicans merit an entirely different standard of coverage.

On Monday's Early Start, co-host Ashleigh Banfield insisted to Sen. David Vitter (R-La.) that "I got to" bring up his 2007 prostitution scandal, so she could ask how Newt Gingrich could "manage the baggage" of his personal sex life. Vitter fired back that "the good news is, in America, it's not up to CNN" how the GOP presidential nominee is chosen.

That Rachel Maddow of MSNBC and Chris Hayes of The Nation may be perpetuating the Weiner scandal apparently has not occurred to them.

Maddow told Hayes last night that she could understand why Republicans were calling for Congressman Anthony Weiner to resign, but she was at a loss to understand why his fellow Democrats in Congress were doing likewise (video clip after page break) --

Chris Matthews on Friday made the absurd claim the "compassionate" Left is too soft on Republican wrongdoers, and that by contrast the Right puts it's "heel into the back of the guy's head when he's down."

The "Hardball" host - with a straight face no less - said this to guests Ron Reagan and Politico's Roger Simon with reference to how the "right-wing press played up [Charlie] Rangel's censure" (video follows with transcript and commentary):

MSNBC's Dylan Ratigan is apparently so intent on depicting Republican candidates for office as stupid that he's willing to make asinine assertions to do it.

Ratigan showed a clip of the Vitter campaign ad and then quipped: 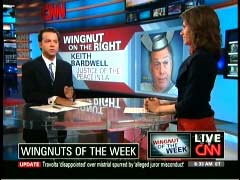 John Avlon of the Daily Beast gave his “Wingnuts of the Week” on Friday’s American Morning on CNN, and omitted the Democratic past of his “wingnut” on the right- Lousiana justice of the peace Keith Bardwell, who recently denied a marriage license to an interracial couple. Avlon didn’t give judge’s party ID at all, and gave the impression that he was on the “right” merely because of his racist conduct.

The Daily Beast writer appeared just after the bottom of the 6 am Eastern hour with anchor Kiran Chetry, who asked the “independent analyst,” as she labeled him, to begin with his choice for “wingnut” on the right: “Wingnut on the right, as you said, Louisiana Justice of the Peace Keith Bardwell, who denied a marriage certificate to an interracial couple, saying he was doing it for the kids. Maybe he was concerned they’d grow up to be president.” Avlon never gave Bardwell’s party ID during the segment. Perhaps its because he was a Democrat during most of his career. He only became a Republican last year, according to a Louisiana state government website.