With Donald Trump securing first-place wins in most primaries on Super Tuesday, MSNBC's Chris Matthews set about to cast Trump as the inevitable nominee and to paint the GOP as acting in an illegitimate fashion were it to attempt to thwart a Trump nomination should he head into Cleveland having won most state primaries. But as his guest Tom DeLay tried to explain, the rules dictate that the nomination is won by a majority of delegates, not a majority of primary wins.

Texas Governor Rick Perry, who, in the oddest of coincidences (that's sarcasm), just so happens to be considered one of the Republican Party's stronger potential contenders for the 2016 presidential nomination, was indicted in Austin today by a Travis County grand jury. The charges are "abuse of official capacity and coercion of a public servant" in connection with a veto "threat" he carried out — thus making "promise" a better word to describe his original stated intentions.

"Threatening" a veto and then carrying through on that "threat" is obviously a pretty routine occurrence in governmental jurisdictions through the country, from the President on down. As to initial press coverage, Paul J. Weber and Will Weissert at the Associated Press predictably misstated the results of another politically motivated prosecution of a major GOP elected official, namely former Congressman Tom "The Hammer" Delay, and focused on how expensive it might be to defend Perry by quoting an hourly legal representation rate which may or may not be accurate. Excerpts follow the jump (bolds are mine):

Back in 2010, when ex-House Majority Leader Tom DeLay was convicted on money laundering charges related to campaign fundraising, all three network morning and evening news shows made sure to tell their viewers. But last night and this morning, after an appeals court overturned that verdict and completely acquitted DeLay of those charges, none of the broadcast networks bothered to even mentioned the former Republican leader’s exoneration.

On their November 24, 2010 evening newscasts, all three networks made gave time to the late-breaking news, accompanied by photos of DeLay with various captions: “Guilty Verdict” on ABC; “Convicted” on CBS; “Guilty” on NBC. The next morning (Thanksgiving Day), all three networks revisited the story again, and ABC carved out even more time for a full report on World News that night.

As DeLay presented his side of the case days after being sentenced to three years in prison for illegally influencing Texas politics, the "Hardball" host said, "You were tied up with people [like] Mike Scanlon and [Jack] Abramoff especially. I saw the movie...You looked like these guys were manipulating you as a member of Congress" (video follows with transcript and commentary):

Lauer to Tom DeLay: Will You Rethink Your Opposition to Gun Control Now?

Former Texas Republican House Majority Leader Tom DeLay, on Thursday's Today show, was cornered by NBC's Matt Lauer on his anti-gun control stance, as Lauer pressed: "In the wake of...that shooting out in Tucson, Arizona, do you today feel the same way about gun control that you did when you were an elected official?" DeLay was invited on to discuss being sentenced in his campaign finance case but Lauer felt the need to shoe-horn in a question about the Gabrielle Giffords shooting as he attempted to guilt DeLay into rethinking his support for overturning the assault weapons ban back in 2004.

First up, Lauer's colleague, Norah O'Donnell, foreshadowed the anti-gun bias turn in the interview, in her set up piece as she reported: " In Congress, DeLay was known for his ruthless ability to make his fellow Republicans tow the line, blocking renewal of the assault weapons ban in 2004, in the news again today because of Saturday's Arizona shooting."

Lauer then advanced that line to DeLay in the subsequent interview segment as seen in the following January 13 Today show exchange:

The Big Three networks all briefly covered the conviction of former House Minority Leader Tom DeLay for campaign money laundering on Wednesday night. But none of them allowed DeLay air time to defend himself. "This is an abuse of power," he said outside the courtroom. "It's a miscarriage of justice, and I still maintain that I am innocent. The criminalization of politics undermines our very system, and I am very disappointed in the outcome."

He was once the most powerful Republican in Washington. Tonight, former House Majority Leader Tom DeLay is a convicted felon. A jury in Austin convicted him today of money laundering charges. Prosecutors said he illegally funneled corporate donations to legislative campaigns in Texas. DeLay, who is 63, could get anywhere from five to 99 years in prison. His lawyer called the verdict a miscarriage of justice and vowed to appeal.

Ebert first graced his Twitter followers with the following: 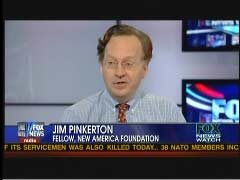 On Saturday’s Fox News Watch on FNC, substitute host Eric Shawn picked up on a NewsBusters item which recounted that, after the Justice Department dropped charges against former House Republican Leader Tom DeLay, the New York Times buried the news on page A-18 while the Washington Post, by contrast, made room for the story on its front page. Shawn: "The Justice Department has dropped its corruption investigation of the former Congressman after six years. DeLay was probed primarily for his involvement with disgraced lobbyist Jack Abramoff. It hit the front pages of the Washington Post on Wednesday. Guess what, the New York Times, page A-18."

After the FNC host asked if there was a media double standard at play, regular panel member Jim Pinkerton of the New America Foundation cited Tim Graham of the Media Research Center – parent organization of NewsBusters – by name. Pinkerton: "Oh, absolutely. As Tim Graham at the Media Research Center was the first to point out, you know, look, this was huge news at the time when they thought he'd be convicted of all sorts of stuff. When he's exonerated, notice no story." 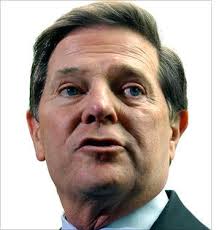 When former House Majority Leader Tom DeLay announced that the Justice Department was dropping its six-year investigation of his relationship with convicted lobbyist Jack Abramoff, The Washington Post put the news on the front page Tuesday. The New York Times decided that this story was best put on page A-18.

The front page of the Times covered flooding in Pakistan, Team Obama's tough evaluation of offshore drilling permits, and a chilling Rod Nordland story on new public executions by the Taliban in northern Afghanistan. But the front page also offered "Walking in New York? Beware Men Turning Left" and "Exclusive Golf Course Is Also Organic, So a Weed or Two Get In."

At least the Times covered the DeLay story. To date, the newspaper "of record" has not mentioned Senate Majority Leader Harry Reid's exclamation last Tuesday that "I don't know how anyone of Hispanic heritage could be a Republican." 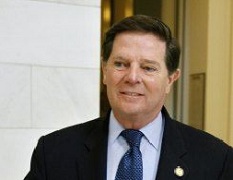 The Justice Department has dropped its case against former House Majority Leader, Tom Delay, and Newsweek's Eleanor Clift is in mourning. She just can't accept the fact that there was no substance to the charges against DeLay and ascribes the dropping of the case to the Obama Justice Department trying to score points with Republicans in the interest of bipartisanship. Clift also manages to smear the late former Alaska Senator Ted Stevens in her angst over the dropped charges:

The Justice Department’s decision to let former House majority leader Tom DeLay off the hook and end the six-year-long investigation that drove him out of Washington at the peak of his power should win the Obama administration some points with Republicans, if not Democrats. This is the second high-profile Republican that Attorney General Eric Holder has vindicated, the other being the late senator Ted Stevens, whose corruption case Holder declined last year to prosecute.

Our Rangel Game: Which Eugene Robinson Is It?

On August 5, 2010, The Washington Post published a short editorial by Eugene Robinson with the title "Charlie Rangel's no crook." But on October 9, 2009, the same Eugene Robinson penned a column titled "Charlie Rangel's Cloud: An Ethics Case Could Drag Democrats Down." The closer we get to elections, Robinson seems to get progressively less impressed with the case against Rangel. This is his new Rangel-name-is-cleared line:

Charlie Rangel's no crook. He’s right to insist on the opportunity to clear his name, because the charges against him range from the technical all the way to the trivial.

All right, there’s one exception: On his federal tax returns, Rangel failed to declare rental income from a vacation property he owns in the Dominican Republic -- a mortifying embarrassment for the one-time chairman of the House Ways and Means Committee, which writes the tax code. But certain facts about this transgression rarely get mentioned. For one thing, Rangel’s so-called “villa” can’t be very palatial, since it cost only $82,750 when he bought it in 1987. For another, Rangel has already filed amended tax returns and paid everything he owed, plus penalties and interest.

WaPo Film Critic Suggests DeLay, Abramoff Should Have Been 'Completely Killed Off'

On Friday, Washington Post film critic Ann Hornaday merged her review of Iron Man 2 with a leftist documentary on convicted conservative lobbyist Jack Abramoff. This strange mix led to Hornaday recklessly suggesting that Abramoff and former Rep. Tom DeLay may rehabilitate their careers when they should have been "killed off." Is that a metaphor? Not if you're holding a sign at a Tea Party rally. Here's how Hornaday concluded:

Abramoff is due to be released from prison later this year. With his trial for breaking Texas campaign finance laws still pending, DeLay went dancing on TV, presumably until he's either convicted or free to make his political comeback. [Former DeLay aide Michael] Scanlon has pleaded guilty but has yet to be sentenced, evidently in order to testify against anyone who might still be indicted. As every decent comic book villain knows, if the good guys don't succeed in completely killing you off, you can be counted on to show up again in the sequel.

Hornaday made a series of strange Iron Man/Abramoff analogies before the kill-them-off ending: