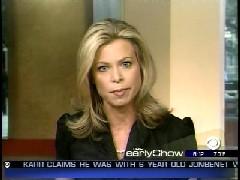 When the New York Times originally broke the story of the NSA Terrorist Surveillance Program, the rest of the media leapt to the bandwagon, and immediately began referring to President Bush's "Domestic Surveillance Program." One of the forums where this has been particularly egregious is CBS' The Early Show. Well, the last 7 months and all of the discussion has done nothing to change the view of the program held by CBS. There were two separate comments in a 30-second news snippet from Tracy Smith that were either inaccurate or incomplete, and, of course, they were inaccurate or incomplete in a manner that made the program sound worse than it is.

The first was the continued mis-labeling. The program is not, despite the mainstream press' continued insistence, a "domestic" surveillance program. The NSA is not monitoring American's domestic calls without warrants, or at least, if they are, that has not been made public. That's not what the program being talked about covers. The NSA is monitoring overseas communications of suspected terrorists and terrorism supporters. If some of those communications are into the United States, they're continuing to monitor. That doesn't make the conversations "domestic."

But according to Tracy Smith on The Early Show today, "President Bush says that he expects a Federal Appeals Court to uphold a key part of his domestic surveillance program." The drumbeat continues.

And then, to top it off, after mis-representing what the program is, she mis-states what the program does. "[The terrorist surveillance program] allows the monitoring of e-mails and phone calls from Americans suspected of having tied to terrorism."

Again, that's such an incomplete description as to be a virtual lie. The program that has been talked about and discussed is not about surveilling Americans. The surveillance is of terrorism suspects overseas. If they were surveilling Americans as a policy, there would surely be cases of entirely domestic conversations having been monitored. There have been no allegations that that has taken place. None. And it's just plain wrong to suggest, as CBS continues to do, that the program under discussion does that.

(The entire clip runs about 30 seconds, and can be seen here.)