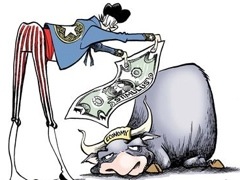 Good economic news is so rare for the current administration, that when some does emerge, many in the media parrot it as fact without really examining the claims that undergird it. New CBO numbers on the stimulus, for instance, have been trumpeted as proof the legislation at least helped, despite the fact that the numbers have little to no basis in reality.

Congressional Budget Office models are based on the assumption that stimulus spending will create jobs. They assume the conclusion they purport to demonstrate, and then claim they've demonstrated it. But if the model is inaccurate or simply based on false premises, it simply goes on tallying jobs "created or saved" without regard to the actual employment rate.

In March, a reporter asked CBO director Doug Elmendorf: "If the stimulus bill did not do what it was originally forecast to do, then that would not have been detected by the subsequent analysis, right?" His response: "That's right. That's right." Yet despite those numbers' disconnect from reality, the media continue to report them as fact, and proof that the stimulus is working.

"[T]oday’s CBO report confirms that things could have been much worse without the stimulus," claimed ABC's Z. Byron Wolf yesterday. "The effects of the stimulus, according to the report, will continue to increase through part of 2010, before subsiding."

Wolf neglected to mention that the reported GDP increase of between 1.7 and 4.2 percent and decline in unemployment of between 0.7 and 1.5 percent were based on equations, not, you know, reality. As one ABC commenter put it, "You do realize that the CBO didn't actually use any real world data to prove this, right?" Either Wolf did not realize that fact, or he simply didn't think it worth a mention.

Reuters's Andy Sullivan also reported on the data without mentioning its disconnect from reality. The stimulus, Sullivan stated without challenge, "put up to 2.8 million people to work and boosted GDP by up to 4.2 percent in the first three months of 2010." Notice the use of "up to" -- Sullivan made sure to repeat the most optimistic claims in the lede.

Ironically, Sullivan noted that "CBO's latest estimate does not differ significantly from its previous assessments," but apparently failed to consider that the use of equations tends to produce similar results. The similarities underscore the danger of relying on such equations: if the CBO got something wrong, how would it know? New data continues to confirm projections. Meanwhile, in flyover country, Americans are still out of work.

Jay Bookman of the Atlanta Journal-Constitution took it one step further. Not only do the CBO numbers confirm that the stimulus is working, but they demonstrate that the bill "has had an even bigger economic impact than expected." Never mind that CBO's numbers don't tell us anything about its actual economic impact.

Bookman added, "the stimulus that according to some hasn’t created one single job has been and continues to be an important success." Got it, naysayers? The stimulus worked. The equations told me so. Pay no attention to the 9.9 percent unemployment rate. It worked, dang it.

It's not as if that methodology is a secret. Some news outlets managed to report on it factually. "CBO's analysis was based on economic modeling derived from past spending and tax-cut programs," reported Stephen Dinan for the Washington Times, "which means its calculations are an estimate of what is going on, not an actual count of specific jobs created."

That, of course, explains the consistency of CBO's numbers, despite the extreme volatility and unpredictability of the American economy. National Review's Stephen Spuriell makes "a bold prediction":

The CBO's next quarterly report on the stimulus will come to roughly the same conclusions, regardless of what we actually observe with regard to GDP, the unemployment rate, or the number of people employed. Let me be even bolder: All of the CBO's quarterly reports from now until the law's expiration will reach the same conclusions, because the CBO's models beg the question: They assume that certain inputs in the form of government  spending have certain predictable effects on GDP and employment that are in line with the Keynesian view that fiscal stimulus creates jobs. Every quarter, the CBO just re-runs its models, regardless of what we are observing in the real world. The agency is repeating itself...

Critics of the Keynesian view of things have disputed the CBO's multipliers from the beginning, and our arguments have not changed (e.g. if every dollar of government spending ultimately raises the GDP by the amount CBO says it does, then we should just let the government spend all the money). Commentators who are treating the latest CBO report as new empirical evidence that the stimulus did great things for the economy either don't know what they're talking about or else they are being very hackish.

Via Ed Morrissey, a new study conducted by Harvard professors Lauren Cohen, Joshua Coval, and Christopher Malloy has found that "as a state's congressional delegation grew in stature and power in Washington, D.C.,"

companies experienced lower sales and retrenched by cutting payroll, R&D, and other expenses. Indeed, in the years that followed a congressman's ascendancy to the chairmanship of a powerful committee, the average firm in his state cut back capital expenditures by roughly 15 percent, according to their working paper, "Do Powerful Politicians Cause Corporate Downsizing?"

"It was an enormous surprise, at least to us, to learn that the average firm in the chairman's state did not benefit at all from the unanticipated increase in spending," Coval reports.

The comparison between congressional pork and large-scale stimulus spending is not exact, but this study does lend weight to critics of the Keyensian model, which backstops the CBO's employment and economic activity estimates.