Before all the facts were known, the media ran with a story accusing pro-life activists from Covington Catholic High School of racism during an altercation with left-wing demonstrators at the Lincoln Memorial after the March for Life on Friday. That false narrative began to fall apart almost immediately, once additional video surfaced proving how the original, social media version of the story, was false. NewsBusters has analyzed the coverage and assigned a grade to various prominent media outlets in their handling of the fake news.

Here’s how the broadcast and cable networks, plus key newspapers, covered the story (some of these have been updated since this item was first published on January 22): 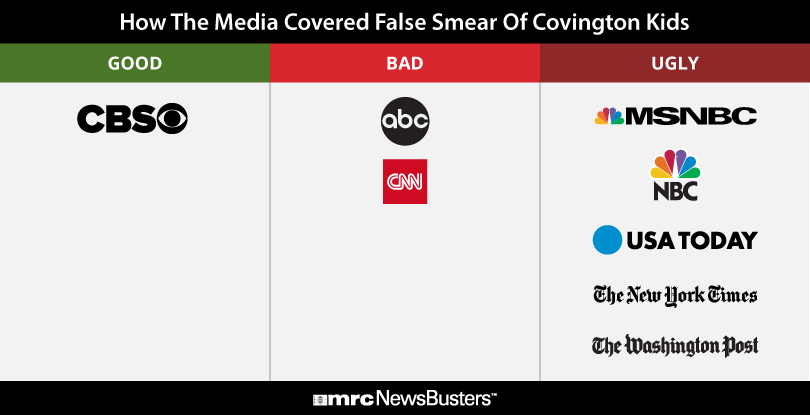 ■ CBS: The broadcast network held off on airing a full report on the story until Monday’s CBS This Morning, when new facts had come to light undermining initial descriptions of the incident. Co-host Bianna Golodryga even warned against “people jumping to conclusions without knowing the full story.”

■ ABC: The network first covered the story on Sunday’s Good Morning America, and was already casting doubt on the account from liberals on social media. Wrapping up another report on Monday’s GMA, Reshef declared: “There was definitely a rush to judgment by a lot of people.” But ABC failed to acknowledge their own role in that “rush.”

■ NBC: It was the first of the broadcast networks to jump on the story, without having all the facts. On Saturday’s NBC Nightly News, anchor Jose Diaz-Balart immediately accepted leftist viral online reaction as the truth, proclaiming: “A troubling scene many are calling racist played out in Washington yesterday..." Not only did NBC fail to retract the story the next day, but Monday’s Nightly News, reporter Ron Allen continued touting claims of “racism” against the teens. During a hostile interview with one of the Covington students aired on Wednesday's Today show, co-host Savannah Guthrie asked if teen owed an "apology" due to his "aggressive" behavior. 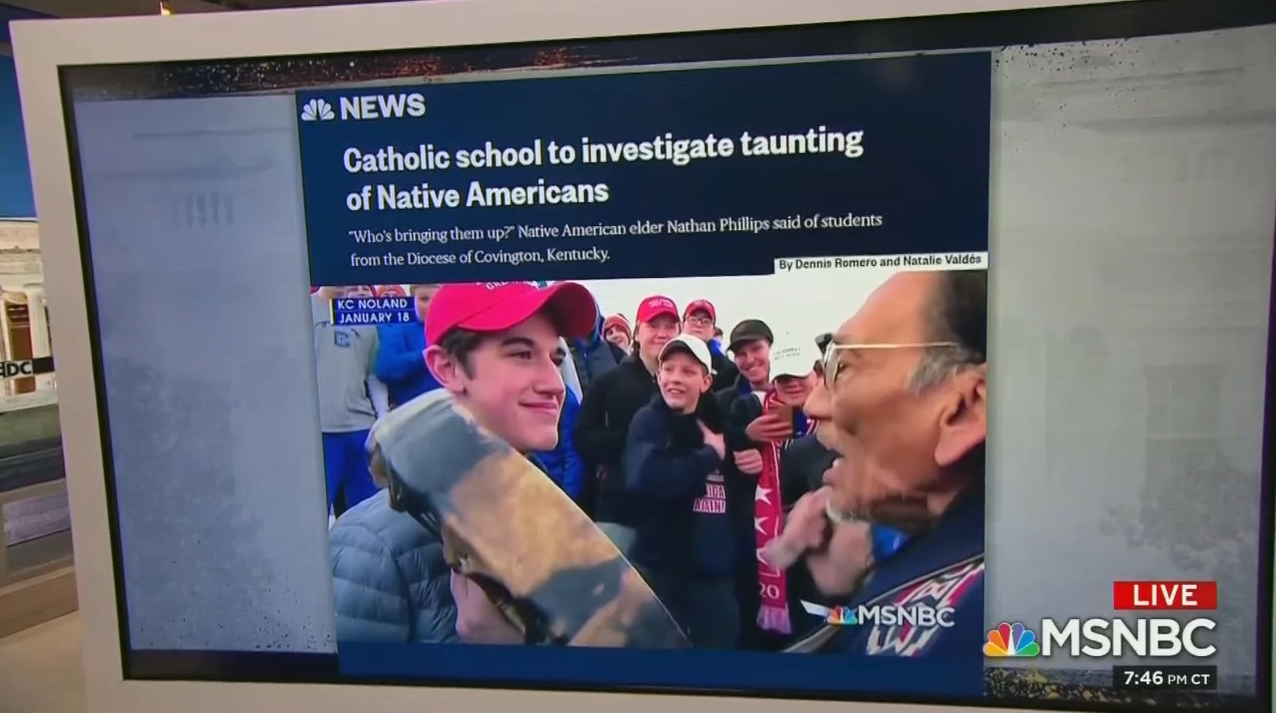 ■ MSNBC: The cable arm of NBC News was even worse. Not only did MSNBC devote significant air time to the story over the weekend, but the tone of the coverage was nasty. On Sunday’s Kasie DC, a one-sided panel discussion devolved into pundits comparing the Covington students to neo-Nazis and segregationists.

■ CNN: The cable channel spent even more air time on the dubious story than MSNBC. On Saturday, Unfiltered host S.E. Cupp attacked the “mob of MAGA hat-wearing high school students” and claimed they were “clearly...not getting a good education.” After the full facts came out, Cupp took to Twitter Monday morning to apologize for “reacting too quickly to the Covington story.” On his Tuesday night show, anchor Chris Cuomo claimed the students were "victims of their own choices" for wearing "Make America Great Again" hats.

■ USA Today: Even after the incident had been debunked, the paper still insisted on publishing a smear against the Covington students, featuring a softball interview with Phillips, who trashed the kids as “beastly” and having a “mob mentality.”

■ New York Times: On Monday, the liberal paper was eager to blast the “racist” teenagers for having “mocked a Native American veteran.”

■ The Washington Post: On Sunday, the paper published a very one-sided article on the front of the Metro section based only on the Native American activist's lies about being “surrounded” by the Covington kids. The headline was “Marcher’s accost [sic] by boys in MAGA caps draws ire.” On Sunday, the paper also published a nasty blog post on “The Catholic Church’s shameful history of Native American abuses.”

By Monday, the paper's article on the top left of the front page was headlined “Fuller view emerges of conflict on Mall.” But a few paragraphs of testimony of “smirking” Covington student Nick Sandmann (beginning inside the paper on page A-15) was vastly outnumbered by Phillips, the Black Hebrew Israelites, and left-wing activists, including Women’s March participant Jessica Travis (who claimed “The kids really went into a mob mentality”) and Nathaniel Dimof, who launched a parody page on Facebook called “Covington Catholic White Male Entitlement High School.”

“Good” news organizations either held off reporting the story until the facts were known, or offered full retractions/apologies after the initial version fell apart. “Bad” news organizations tried to salvage their initial coverage by presenting the true version as a mere complication to an-already established narrative. The “Ugly” side was seen in outlets that used the false story to smear underage kids as evil, racist, Nazis – when the truth was the exact opposite.