CNN's Cuomo Bashes Covington Kids as ‘Victims of Their Own Choices’ 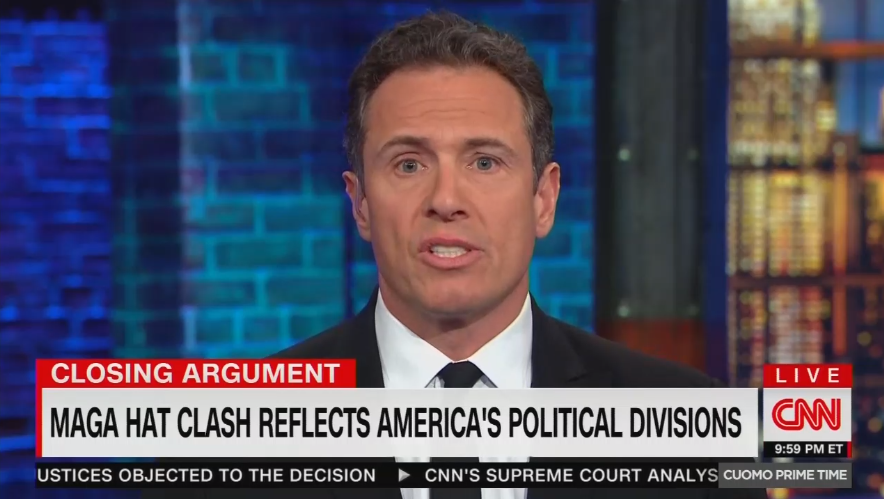 Demonstrating that he had no problem with picking on children, CNN’s raging Chris Cuomo ended Tuesday’s Prime Time by taking shots at the Covington Kids by suggesting they were “victims of their own choices.” While chiding the students for wearing MAGA hats, Cuomo also proved his willingness to disregard the truth and peddled the lies of agitator Nathan Phillips. Cuomo aided in pushing provably false claims Phillips was trying to defuse the situation.

Despite claiming he wanted to give the Covington Kids “a little leeway” because they were young, Cuomo claimed Covington Catholic student Nick Sandmann escalated the confrontation “into a standoff.” “That was not a good choice. Was it legal? Sure,” he condescendingly added.

He oozed that discontent for Sandmann while claiming “the man, Nathan Phillips, apparently wanted to diffuse the tension and walked up to do exactly that.” That is a LIE. What the video of the incident showed was that Phillips went to the kids, not the Black Hebrew Israelites who were shouting racist slurs, and targeted Sandmann for harassment. On top of that, Phillips’s account of what happened has shifted constantly (and still is) and was not at all corroborated by the video.

Cuomo chided “the left and the right” for “almost instantly [having] equal and opposite reactions.” But included in his gripe was the right saying “the man with the drum” was “lying and provoking.” That wasn’t a kneejerk reaction. That was a provable fact that Cuomo refused to acknowledge.

The closest Cuomo came to being critical of the real instigators and racists was when he mildly suggested the Black Hebrew Israelites were “being unduly provocative.” That’s one heck of a way to spin “incest babies” and the other vile things that were said.

Seemingly trying to shame the Covington parents, Cuomo began spouting off about how he would have handled the situation:

Here’s mine. If that were my son, who happens to go to a great Catholic school, would I like what he did? If I were there, would I have allowed the kids to be in that situation? No and no. There was a disrespect at play that doesn't work for me in these circumstances. I don't blame the kids.

“Where were the chaperones? Why did a school event involve MAGA hats,” he demanded to know from the parents, teachers, and chaperones.

Cuomo’s next gripe was with President Trump sticking up for the kids against the vicious liberal media that put their lives in danger with their false reports. After reading Trump’s tweet of support, Cuomo bitterly lashed out and blamed the kids: “You neglect that they were victims of their own choices and actions!” But Cuomo neglected to mention that the kids were receiving death threats.

“[T]he kids shouldn't be pawns,” he proclaimed. Yet the liberal media had no problem exploiting the Parkland students to push gun control. From there, Cuomo disgusting tied the Covington Kids to the recent racist comments of Iowa Congressman Steve King (R):

The second reason this is bothersome, our President hasn't said a word about Steve King and his bigoted-white-power-friendly yap. His party, his fellow Republicans, elected officials in Congress, all came out against King. He stayed quiet. But now when the white kids wearing the MAGA hats get into it with a minority, he's up for it.

Looking to get one more shot in on the teenagers, Cuomo, an adult, ominously declared: “Hopefully, [Sandmann] will never make a choice like this again.” Clearly, that choice is being a Trump supporter. This. Is. CNN.

CHRIS CUOMO: The confrontation in D.C. with the Native American and Catholic school kids raises questions, motivation, why people react in the moment the way they do and what should happen to those people now.

Now, I'm not talking about the people involved in the actual confrontation. I'm talking about everybody else. Please accept that in the actual confrontation no one was hurt. Thank God. I have not seen credible evidence that the kid involved did or said anything extreme to the man playing the drum. The group taunting the kids was being unduly provocative. Where were the chaperons? Why did a school event involve MAGA hats?

Then we get to the heart of it. The face-to-face encounter, the man Nathan Phillips apparently wanted to diffuse the tension and walked up to do exactly that. And surely, the kid, Nick Sandmann, he doesn't seem to be afraid, but he did make a choice and that was to make it into a standoff. That was not a good choice. Was it legal? Sure. That's not my test. And it shouldn't be thee test.

Here’s mine. If that were my son, who happens to go to a great Catholic school, what I like what he did? If I were there, would I have allowed the kids to be in that situation? No and no. There was a disrespect at play that doesn't work for me in these circumstances. I don't blame the kids. My concern were the reactions more so.

The left and the right almost instantly had equal and opposite reactions. There were reports of extreme misconduct, attack from the kids, reverb about it being a set up to hurt the kids, the man with the drum was accused of lying and provoking, and then came the president. “Nick Sandmann and the students of Covington have become symbols after fake news and how evil it can be. They have captivated the attention of the world and I know they will use it for the good, maybe even bringing people together. It started off unpleasant, but can end in a dream.”

Isn't that your job, not the teenager?! Weren’t they out of their depth? Aren't they supposed to be protected from this? Aren't you the one who is supposed to find a way to bring us together instead of exploiting every opportunity to divide, railing on the media and the left, propping up the kids as victims. You neglect that they were victims of their own choices and actions. Shouldn’t we discuss that? I wonder if the hats had anything to do with your muted response.

This play by POTUS is bad for two reasons. One: the kids shouldn't be pawns. They are kids. I'm not excusing their conduct. I don't know who consented to them. I don't know who consented to the hats as a school event. There are issues of behavior for the parents and the school, period. But they are not players in the left/right wars just because of the hat and the confrontation. I do give them a little leeway as kids. All kids, any kids, that's why the law treats them differently and certainly should even more than it does.

The second reason this is bothersome, our President hasn't said a word about Steve King and his bigoted-white-power-friendly yap. His party, his fellow Republicans, elected officials in Congress, all came out against King. He stayed quiet. But now when the white kids wearing the MAGA hats get into it with a minority, he's up for it.

And what message does that send? You go after white kids, POTUS doesn't like it. Go after everyone else, maybe he'll stay silent. There's a pattern of choices by this President and you have to call it out because it's not what we're about. Especially when and where this happened.

Think of this! All of this taking place at the Lincoln Memorial on MLK weekend. The Reverend once told the nation he had a dream of equality. What happened here ain't that dream. There was no violence, but it wasn't nonviolent protests. It was a default to opposing something for no good reason. Literally looking for differences and partisans rushing to weaponize it. This confrontation is the truth in one major regard. It's a true reflection of where we are. We seem to be able to agree on nothing.

But I will argue that it isn't proof that all is lost. And that the division while overwhelming there's a chance for better situations like this are supposed to be part of making it better. Teaching the kids that you got to inject kindness into the situations, the power of dialogue, what confrontation should be about. The kid even gets that. In his statements that he's made publically, he says I wish we could have talked. I wish this had never happened. He's right. Hopefully, he will never make a choice like this again.

But how about the rest of us? When will we decide to handle things better? You know what we could use? A leader in that regard. That’s what a president is supposed to be.