While the broadcast networks all eagerly hyped social media executives being hauled before Congress on Tuesday to testify about Russian interference in the 2016 election, only CBS covered a revelation from the hearing that Russia sought to undermine Donald Trump’s legitimacy as president after the campaign was over.

“Facebook’s attorney said those Russian ads and posts did not stop after the election. In fact, they just changed their focus and were aimed at sowing discord in the country and raising doubts about President Trump’s legitimacy,” correspondent Nancy Cordes reported at the end of a full report on the hearing for Wednesday’s CBS This Morning.

She added: “They say that this is a sign that these trolls were more intent on creating chaos in the United States than they were on focusing on one particular candidate.”

One would think such news would be the headline of any coverage about the congressional testimony. However, Cordes only managed 27 seconds of air time to share the information with viewers. The reporter also offered a full report on Tuesday’s CBS Evening News, but skipped any mention of Trump being a target of the Russian smear campaign.

On Tuesday, The Hill reported a specific example of how Russian-backed groups worked to undermine Trump immediately after the election. A left-wing protest against the then-President-elect was attended by thousands of demonstrators outside Trump Tower on November 12, 2016 and was “organized by the Facebook page for BlackMattersUS, a Russian-linked group that sought to capitalize on racial tensions between black and white Americans.”

At least CBS noted the fact that the President was a target of Russian propaganda, NBC and ABC didn’t bother to include that detail in their coverage of the hearing. Tuesday’s NBC Nightly News had a full report on the testimony and Wednesday’s Today show offered a 25-second news brief on how “officials from Facebook and Google and Twitter took a lashing from lawmakers over Russia’s involvement in last year’s presidential election.”

Here is a full transcript of Cordes’s November 1 report: 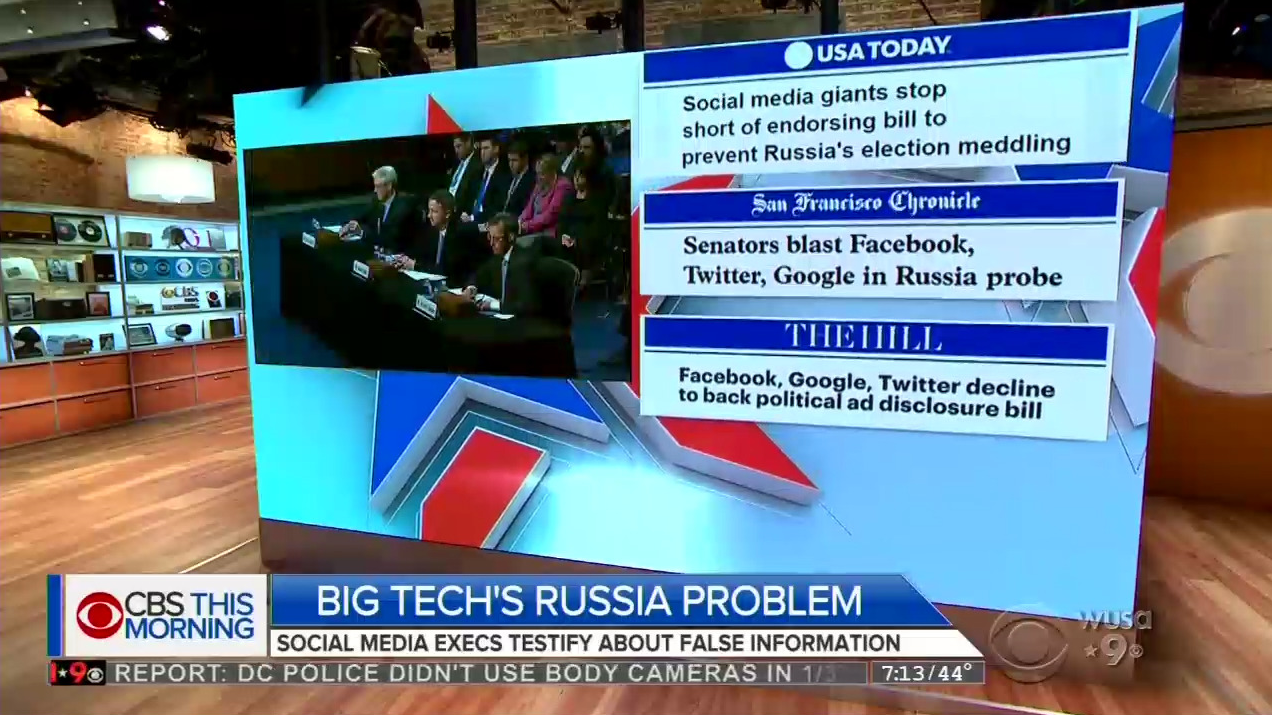 BIANNA GOLODRYGA: Lawyers for social media companies say Russia continued to spread false information online even after the 2016 election. A Senate Judiciary subcommittee yesterday questioned representatives of Facebook, Twitter, and Google, with lawmakers wanting to know how Russia-backed propaganda spread unnoticed to millions of Americans. Nancy Cordes is inside the hearing room, where the Senate this morning will be hearing from the Senate Intelligence Committee, and they’ll be asking questions as well. Nancy, good morning.

NANCY CORDES: Good morning. That’s right, the executives from those three social media giants will face more tough questions today about how exactly they are tackling this problem of Russian ads and fake news that plagued the 2016 election. Yesterday, those executives from Twitter, Facebook, and Google told Senators that an internet troll farm based in St. Petersburg, Russia set up 120 Facebook pages, where it posted more than 80,000 pieces of content over two and a half years.

And here's what happened next, all that material was delivered directly to the news feeds of approximately 29 million American users, who then shared it with millions more, not knowing that all of this information was actually coming from Russia.

SEN. AL FRANKEN [D-MN]: You can’t put together Rubels with a political ad and go like, “Hmm, those two data points spell out something bad.”?

CORDES: Facebook’s attorney said those Russian ads and posts did not stop after the election. In fact, they just changed their focus and were aimed at sowing discord in the country and raising doubts about President Trump’s legitimacy. They say that this is a sign that these trolls were more intent on creating chaos in the United States than they were on focusing on one particular candidate.