While NBC’s Today hailed NFL Quarterback Colin Kaepernick as a hero last year over his refusal to stand during the National Anthem, on Monday, the morning show was aghast at President Trump’s criticism of such protests. The broadcast hyped a “firestorm of resistance” against Trump across the NFL on Sunday.

“A wave of protests across the NFL during the National Anthem, after President Trump called out players for not standing. A massive show of solidarity, hundreds taking part, including some of the biggest names in football,” co-host Matt Lauer proclaimed at the opening of the program. He later touted the “widespread pre-game demonstrations by NFL players in defiance of President Trump.”

Correspondent Craig Melvin began his report on the topic by highlighting accusations of racism against the President: “Some have suggested that part of this is about race. The president going after a league filled with African-Americans. The President pushing back on that assertion to a group of reporters yesterday, insisting that this has nothing to do with race...”

That echoed the discussion on ABC’s Good Morning America, where co-host George Stephanopoulos claimed Trump was “already in trouble” for having to make such a defense.

“In football stadiums throughout the country and even overseas, more than 100 NFL players knelt in defiance after President Trump spoke out against the league,” Melvin reported. Further promoting the protest movement, he added: “Mr. Trump doubling down after taking aim at players following the lead of free agent Colin Kaepernick, who started protesting the anthem last year to bring attention to racial and social inequality." He announced that Trump's "comments set off a firestorm of resistance.”

I think the latter two, in favor of free speech and a protest against the President. Up until yesterday, this was – the players would want people to know this was not about the flag, this was not about patriotism. In their opinion, it was about social change. But yesterday, this was a group of our family got attacked and called names and said they were unpatriotic and should be fired for what we feel is demonstrating our First Amendment right. We’re going to bow up, band together as a family, and they reacted. You had people who hadn’t been involved in this movement, now saying, “I’m going to side with my teammates.”

Fellow co-host Savannah Guthrie noted that “many people feel these players have a right to protest and others are deeply affected and offended by the notion of kneeling during our National Anthem.” Hoda Kotb pointed to one player who did not participate in the demonstrations: “The Steelers, a guy, as you know, Alejandro Villanueva, made a big stance. He is a veteran and his entire team stayed in the locker room, but he stood out in the tunnel. And really it must have been a really difficult battle for him.”

It’s a sad commentary on the state of the nation when it’s a “very difficult battle” for a military veteran to show respect for the National Anthem and the flag.

The biased coverage was brought to viewers by Alieve, Old Navy, and StateFarm.

Here is a full transcript of Melvin’s September 25 report: 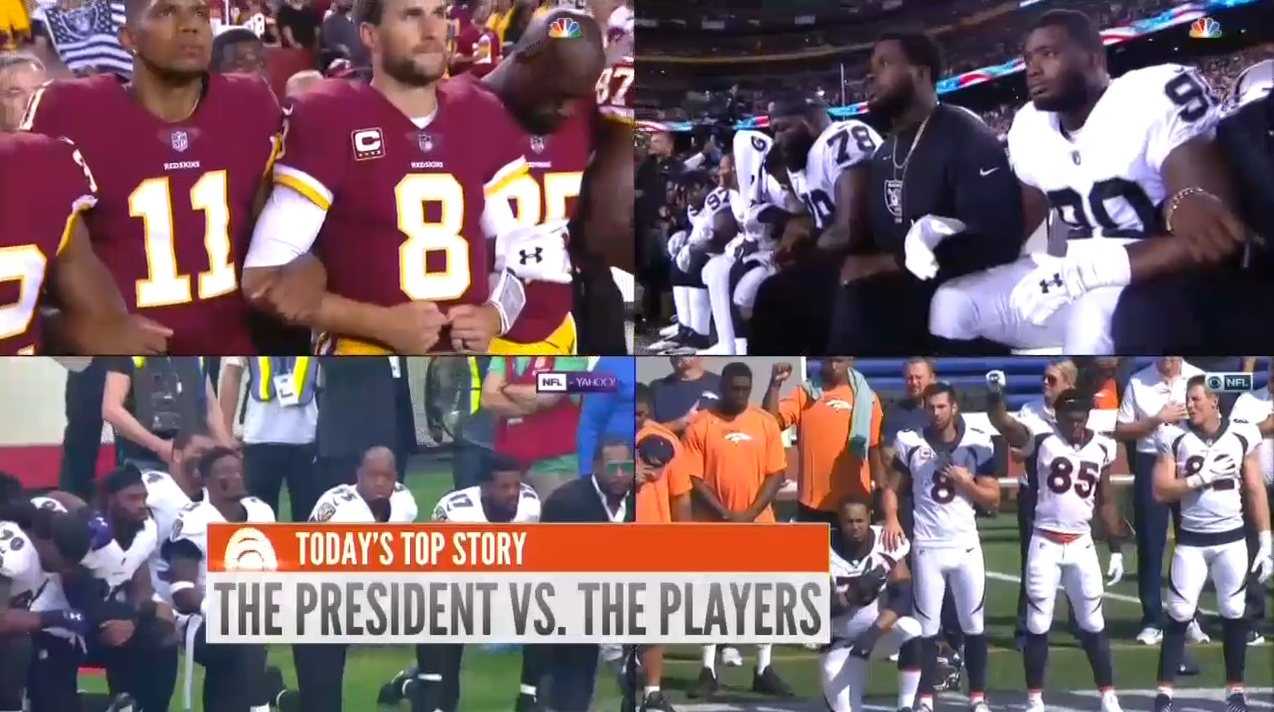 SAVANNAH GUTHRIE: You know, sometimes we start this show with sports, sometimes with politics. Rarely both together, and that’s what we have now.

MATT LAUER: That’s right, this is our top story on a Monday morning. Those widespread pre-game demonstrations by NFL players in defiance of President Trump, after he said players who don’t stand during the National Anthem should be fired. Today National Correspondent Craig Melvin has more on this story. Craig, good morning.

CRAIG MELVIN: Matt, good morning to you. It was, in fact, a lot more than football this weekend at stadiums like this all over the NFL. Some have suggested that part of this is about race. The president going after a league filled with African-Americans. The President pushing back on that assertion to a group of reporters yesterday, insisting that this has nothing to do with race, adding, “I’ve never talked about race.” Nonetheless, his criticisms fueling protests from players, from coaches, and some owners.

[ON-SCREEN HEADLINE: The President vs. The Players; Mass Protests at NFL Amid Trump Criticism]

MELVIN: In football stadiums throughout the country and even overseas, more than 100 NFL players knelt in defiance after President Trump spoke out against the league, tweeting multiple times, demanding team owners punish players who protest the National Anthem.

DONALD TRUMP: We have great people representing our country, especially our soldiers, our first responders. And they should be treated with respect.

MELVIN: Mr. Trump doubling down after taking aim at players following the lead of free agent Colin Kaepernick, who started protesting the anthem last year to bring attention to racial and social inequality.

TRUMP: Wouldn’t you love to see one of these NFL owners, when somebody disrespects our flag, to say, “Get that son of a bitch off the field right now! Out! He’s fired! He’s fired!”

MELVIN: But those comments set off a firestorm of resistance. All day Sunday, players took a knee, sat down, raised fists. Some teams chose to stay in the locker room during the ceremony. Still, others locked arms in solidarity with each other, including Patriots Quarterback Tom Brady, a friend of Mr. Trump. The President’s attacks have sparked backlash from some high-profile supporters.

REX RYAN [ESPN]: I’m pissed off, I’ll be honest with you.

RYAN: I’m reading these comments and it’s appalling to me.

MELVIN: Owners of several teams issued statements opposing the President, including New England Patriots owner, Robert Kraft, a campaign donor. Saying he was, quote, “Deeply disappointed” by the tone of the President’s comments. Adding, “I support [the players’ right] to affect social change and raise awareness in a manner they feel is most impactful.” And while some fans are supporting the players’ rights to protest the anthem.

UNIDENTIFIED MAN A: Somebody disagrees, they should be able to protest how they feel is necessary.

UNIDENTIFIED MAN B: I think it should be done somewhere other than a football stadium.

MELVIN: Some fans even booed those who demonstrated from the stands. But not all players demonstrated Sunday. When the Pittsburgh Steelers chose to stay in the locker room during the Anthem, U.S. Army veteran Offensive Tackle Alejandro Villanueva, chose to stand, hand over heart, at the edge of the field.

The uproar coming as the President also takes aim at NBA superstar and vocal critic Steph Curry. Withdrawing an invitation to the White House after he said Curry hesitated on whether to attend a ceremony honoring the champion Golden State Warriors. Hitting back on Twitter, Cleveland Cavaliers star Lebron James called the President a “bum,” adding, Steph Curry “already said he ain’t going! So therefore ain’t no invite.”

LEBRON JAMES: He’s now using sports as the platform to try to divide us. That’s just something I can’t stand for.

MELVIN: It would also seem that perhaps these protests are starting to spread to other sports. Yesterday for the first time, a Major League Baseball player took a knee, the Oakland A’s starting catcher.

And they’re also spreading to the stage as well. Over the weekend, we saw a number of artists protest on Saturday. It was Stevie Wonder at the Global Citizens Festival who took not one, but two knees. I was Pharrell on Sunday at a music festival in Charlottesville. And so did Eddie Vetter. Eddie Vetter taking a knee at the same concert in Charlottesville as well. The Pearl Jam front man. That’s the very latest from here Matt and Savannah, I’ll send it back to you guys.

LAUER: Alright, Craig, we appreciate it. We’re going to talk more about this controversy and where it’s headed in our next half hour, with hall-of-famer Tony Dungy.