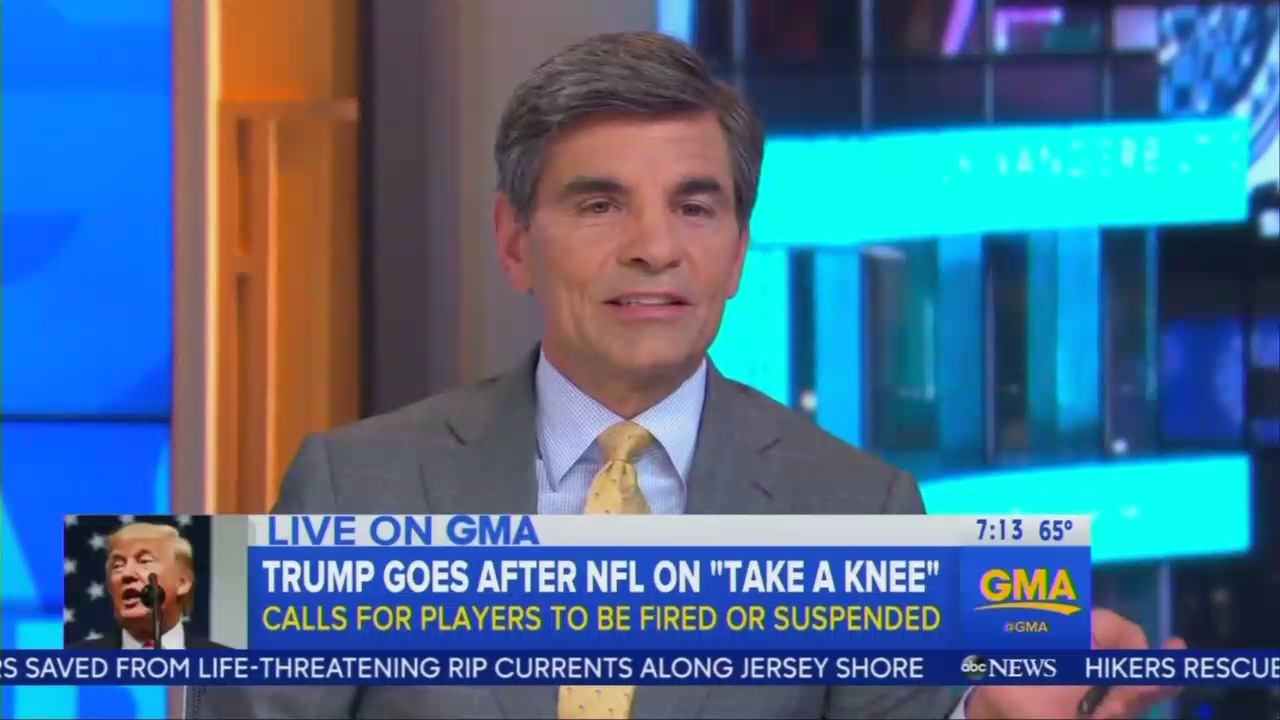 As they’ve done all weekend, ABC and NBC have been practically apoplectic over President Trump’s comments against the NFL anthem protests Friday and Saturday. After players responded Sunday to Trump’s comments by locking arms or kneeling during the National Anthem, many Americans took to social media to blast the league or their own teams for kneeling, which many see as disrespecting the flag and our country.

But ABC didn’t seem to care what regular Americans felt about the protests; instead they invited NFL players, ESPN journalists and celebrities on Monday’s Good Morning America to blast Trump’s comments and defend the league’s actions as fighting for civil rights.

Additionally, GMA’s Cecilia Vega and George Stephanopoulos claimed that most Americans were “completely against” Trump’s comments and supported the NFL’s actions.

To start off ABC's completely one-sided coverage on the topic, reporter Gio Benitez touted the NFL’s hurt feelings over Trump’s slam, said Friday evening during a rally for Alabama Republican Senate candidate Luther Strange. During that rally, Trump suggested team owners fire players who decided to kneel during the National Anthem. This of course caused a backlash from the NFL, who decided to use Sunday’s games to kneel or lock arms in solidarity against Trump’s comments.

Benitez noted these players were “deeply American” and were “angry and disappointed” over the inflammatory comments, but left out all the Americans who felt their display was offensive.

ABC moved onto to tout more support for the anthem protests, this time from celebrities. ESPN’s Ryan Smith gushed the hashtag, “#TakeAKnee” went “viral” and musicians like Pharrell were encouraging audiences to kneel in support for the NFL. Ryan conveniently ignored other hashtags like “#BoycottNFL” “#DumpNFL” and “#BoycottNFLSponsors” that also "went viral," but didn’t fit ABC’s narrative.

Ryan also bashed Trump for not trying to “understand” what the NFL players are “talking about” when they kneel. “I think when that happens, you might see some change,” he stated.

After more interviews with athletes, White House correspondent Cecilia Vega and political analyst Matthew Dowd joined the panel to state more strongly that this was a racial issue, not a patriotism issue.

Calling Trump’s comments a “hand grenade,” Vega reported that the White House “thinks” Americans will be “on their side,” but he misses the point.

“I've got to say, this is so much bigger than the president versus the players. People in this country are going to feel completely against this notion that this is not about race,” she gushed. Anchor George Stephanopoulos then invoked Richard Nixon to agree with Vega’s point, that this was clearly about racism and by Trump denying that, he was making himself look more culpable:

“If the president comes out and says this is not about race, that's a little bit like saying ‘I'm not a crook.’ If you have to say it you're already in trouble,” he stated.

Anchor Robin Roberts added to the bashing, saying Trump was “fanning the flame” of a sensitive issue. But she furthered the inflammation herself by insinuating that Trump was indifferent to racism:

When it comes to sensitive issues like this, past presidents have done their best to put out the flame, not fan the flame, not throw gasoline on it. Many pointed out that president trump's language, “sob,” referring to NFL players who peacefully protest racial injustice, “sob,” that language far stronger than what the president said about white supremacists in Charlottesville. Let's not forget, a young woman, Heather Heyer, was killed, Matt.

ABC transitioned from their bashing of Trump to touting his low approval numbers on jobs and Trump’s handling of North Korea.

This biased segment was brought to you by Aleve, Liberty Mutual and Target.