On Monday, the network morning shows were simultaneously giddy with excitement over FBI director James Comey “clearing” Hillary Clinton by closing the bureau’s investigation into her email scandal while also being fearful over the “political damage” that had been done to the Democratic nominee in the final days of the campaign.

In another segment at the top of the 8 a.m. ET hour, fellow correspondent Kristen Welker declared: “Heading into the final 24 hours of this race, Hillary Clinton getting some welcome news, the FBI saying there's nothing there in its review of thousands of newly discovered e-mails....vindicated over her latest e-mail controversy.”

Leading off ABC’s Good Morning America, co-host Robin Roberts touted the FBI “clearing the cloud of suspicion over those new Clinton e-mails.” Introducing the story moments later, Roberts gushed: “...let's get right to that blockbuster announcement from the FBI, in the eleventh hour, clearing Hillary Clinton once again over those e-mails when she was secretary of state – global stocks jumping after that news.”

Correspondent Pierre Thomas happily asserted: “And just like that, it's over....Nine days after he stunned the nation reviving the investigation into Hillary Clinton's private e-mail server, FBI Director James Comey apparently believes nothing consequential has been discovered.”

CBS This Morning joined in the celebration as correspondent Jeff Pegues told viewers: “The FBI director cleared Secretary Clinton again. The review of the new batch of e-mails found mostly personal e-mails and duplicates of e-mails, the FBI had already seen....Clinton insisted all along that the discovered batch of e-mails would not yield anything new.”

Pegues noted: “Director Comey notified Congress on October 28 and faced criticism for announcing the review less than two weeks before the election.”

After applauding the news, the broadcasts quicky began hand-wringing over the negative political impact the renewed investigation had on Clinton. On Today, Mitchell whined: “Clinton now trying to regain the momentum she had lost when the e-mail erupted more than a week ago....Can the e-mail damage be undone? With polls opening just 24 hours from now, the Clinton campaign worries the good news may not catch up to the bad news of Comey's first letter 10 days ago.”

In a panel discussion that followed, Meet the Press moderator Chuck Todd fretted: “I think at the end of the day, we’re going to look back and say, this may have cost the Democratic Party one or two Senate seats. What this also did down the ballot to galvanize Republicans to basically vote like Republicans again....we may look at the makeup of the Senate and say, a Comey effect.”

On GMA, co-host George Stephanopoulos turned to liberal pundit Cokie Roberts and worried: “...we've never is seen anything – you can say that about so many things about this campaign –  but the influence of the director of the FBI, James Comey.” Roberts ranted: “It's just phenomenal. The judgment is just so questionable....And I really think the – probably, the result of it is the Democrats lose the Senate.”

Stephanopoulos asked: “So he hurt Hillary Clinton?” Roberts agreed: “Absolutely! And what was happening before that was tremendous enthusiasm....And then, all the air went out of the campaign the day he sent that letter to the Congress. And they would have spent – she and her surrogates – would have spent this whole last week, on the trail, campaigning for the Senate –  and that just went away.”

On CBS, co-host Gayle King wondered: “Even though James Comey says there is nothing there. It’s almost like he did a ‘never mind.’ Did he give Trump an advantage during these last couple of weeks?” USA Today’s Susan Page lamented: “Oh, yeah. Nine days where 40 million people voted early under the impression the FBI had revived this investigation. That has had an effect.”

Like Todd and Roberts, Page particularly bemoaned the impact on Senate races: “Strategists for Democrats working down ballots says it has had an effect of their getting the biggest possible lead in Senate races has probably reduced the number of House seats that they will pick up.”

King followed up: “Are you surprised that he – that he has released the letters the way he did? The first one and now the second one?” Page replied: “Unprecedented. We have never seen this happen before with the FBI and I think long-term consequences with the FBI with James Comey working with whoever gets elected president and the public’s faith in the FBI as a non-partisan institution.”

After Comey’s initial letter on October 28 informing Congress of the FBI investigation into Clinton’s e-mails being reopened, the network coverage criticized Comey over Clinton by a three to one margin.

Here are excerpts of the November 7 coverage on all three network morning shows: 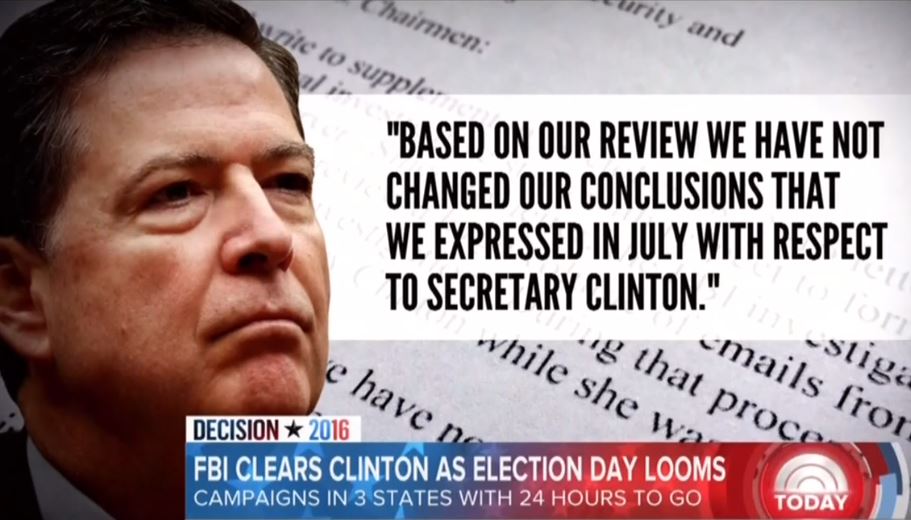 MATT LAUER: In a moment, we’re going to be talking to the campaign managers from both sides, but let’s begin our Decision 2016 coverage on the eve of the election with NBC's Andrea Mitchell. Andrea, good morning to you.

ANDREA MITCHELL: Good morning, Matt. The 2016 campaign now again turned upside down by FBI director James Comey, this time deciding that those Hillary Clinton e-mails on Anthony Weiner's laptop were either all duplicates or not related to government business. The question is now, though, is it too late to undo the political damage?

Hillary Clinton in New Hampshire late Sunday, ignoring the FBI director's letter clearing her, the campaign deciding that any mention of the e-mail controversy could turn off late deciding swing voters.

MITCHELL: Word of Comey's decision coming as Clinton was arriving in Cleveland Sunday afternoon, her aides elated, seen reading the directors's letter on iPads. Comey writing, “Based on our review we have not changed our conclusions that we expressed in July with respect to Secretary Clinton.” Her running mate, Tim Kaine, reacting.

TIM KAINE: Not surprised. It sounds like the FBI director's conclusion is as we thought it would be.

MITCHELL: Clinton now trying to regain the momentum she had lost when the e-mail erupted more than a week ago, with a star assist from Cavalier's royalty, Lebron James.

LEBRON JAMES: This woman right here has the brightest future for our world.

CLINTON: Are you ready to vote?

MITCHELL: Can the e-mail damage be undone? With polls opening just 24 hours from now, the Clinton campaign worries the good news may not catch up to the bad news of Comey's first letter 10 days ago.

And today on the last full day of campaigning, Clinton will make four stops in three battleground states, including an all-star rally at Independence Hall in Philadelphia with both Obamas, her husband, Bruce Springsteen, and Jon Bon Jovi. And then, a midnight final rally in North Carolina. Clinton determined to leave no vote on the table. Matt and Savannah?

GEORGE STEPHANOPOULOS: There's so much excitement for this election — so many people have already turned out to vote across the country. More than 40 million Americans already have voted. And our new poll this morning shows Hillary Clinton leading now by four points.

ROBIN ROBERTS: We're going to hear from both Hillary Clinton and Donald Trump's campaign managers in just a moment — George is going to speak with them — but first, let's get right to that blockbuster announcement from the FBI, in the eleventh hour, clearing Hillary Clinton once again over those e-mails when she was secretary of state — global stocks jumping after that news.

PIERRE THOMAS: Robin, good morning. And just like that, it's over. The FBI director, once again, in the middle of a heated campaign, drawing political fire — this time, from the Trump campaign.

THOMAS (voice-over): Nine days after he stunned the nation reviving the investigation into Hillary Clinton's private e-mail server, FBI Director James Comey apparently believes nothing consequential has been discovered. In a letter sent to Congress on Sunday, Comey writes, 'Based on our review, we have not changed our conclusions that we expressed in July.'

JENNIFER PALMIERI, COMMUNICATIONS DIRECTOR, HILLARY CLINTON FOR AMERICA: And we're glad that this matter is resolved.

THOMAS (on-camera): Sources familiar with the investigation tell ABC News those e-mails from Weiner's laptop contained many duplicates the Bureau had already looked at; and did not have new information that would alter their previous finding that Clinton's actions were reckless, not criminal.

ROBERTS: All right. Thank you, Pierre.

NORAH O’DONNELL: We begin with Jeff Pegues in Washington and the FBI’s announcement of the State Department's e-mails discovered on a private laptop. Jeff, good morning.

PEGUES: FBI Director James Comey told Congress, Sunday, the Bureau hasn't changed its conclusion from July. In the letter, Comey said his agents worked around the clock to review hundreds of thousands of e-mails in nine days, by zeroing in on communications that were to or from Hillary Clinton while she was Secretary of State. Agents in New York discovered the new e-mails while investigating former Congressman Anthony Weiner for allegedly sending sexually explicit text messages to a minor. Clinton insisted all along that the discovered batch of e-mails would not yield anything new. The unexpected update from the FBI meant Clinton staffers were scrambling to read the letter on the campaign board on Sunday.

JENNIFER PALMIERI: We are glad this matter is solved.

PEGUES: Director Comey notified Congress on October 28 and faced criticism for announcing the review less than two weeks before the election.

REP. JASON CHAFFETZ: I believe in the integrity of the FBI. I happen to differ on what the conclusion should actually be.

PEGUES: Despite the FBI analysis, the chairman of the House Oversight Committee, Republican Jason Chaffetz, said more congressional hearings on the horizon.

CHAFFETZ: Regardless of the results of the election, of course, we are going to continue to probe this.

PEGUES: The FBI built a computer program to isolate the relevant  messages. Dozens of FBI agents up against the pressure of a rapidly approaching election day were aided by that special software to make the process more efficient. Republicans and Democrats critical of how the FBI handled this. Gayle?