On her Thursday 1 p.m. ET MSNBC show, host Andrea Mitchell gushed over NBC News special anchor Maria Shriver's political activism as "the force behind the influential Shriver Report about women and poverty in America": "Maria, my God, what you have started, what you have launched here....Equal pay for women...you went and you talked to the President about before his State of the Union, when he was still writing it. And he delivered in terms of addressing that." [Listen to the audio or watch the video after jump]

Mitchell eagerly touted Obama continuing to push the issue on the road: "...just within the last hour, he's done it again. This is the President in Wisconsin today. Let's watch." A clip was played of Obama declaring: "Today women make up half of our workforce, they're making 77 cents for every dollar a man earns. That's wrong.... It's an embarrassment." Following the sound bite, Shriver declared: "Amen." Mitchell excitedly proclaimed: "Maria Shriver, take a bow, let's talk about what you've started here."

Shriver delivering her report to Obama in a White House meeting on January 15 was met with great fanfare on NBC. She appeared on Nightly News that evening to promote her liberal lobbying effort:

As the son of a single mother, President Obama said he is very sympathetic to these issues that one in three women is living on the brink of poverty in the United States of America. And one of the main reasons is the persistent wage gap that exists between men and women....President Obama told me that he would like the issues that are in this report to inform a summit that he wants to hold here at the White House in the spring on working families. 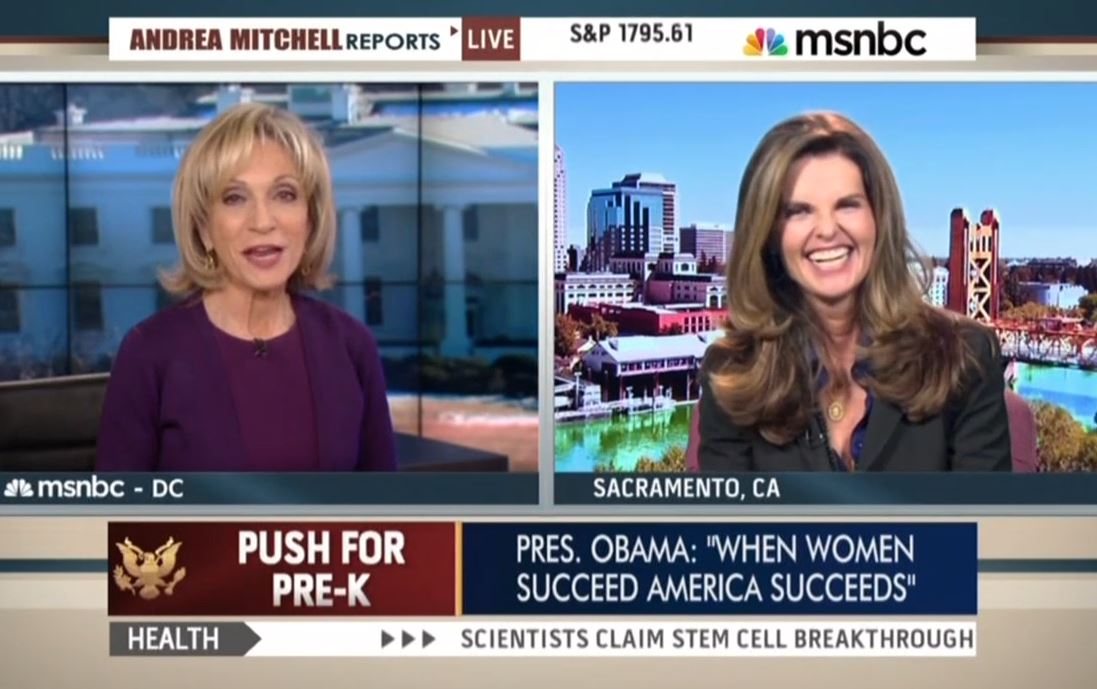 Continuing to tout Obama's support for the cause on Thursday, Shriver concluded: "I think we're really seeing him talk about these issues in a new way and I'm really excited about that. And I think it's also smart. Women make up 54% of political voters."

Neither Mitchell nor Shriver bothered to acknowledge the deceptive nature of the claim that women only make "77 cents on the dollar" compared to men. The Washington Post's Glenn Kessler fact-checked that faulty statistic immediately after the President used it in Tuesday's State of the Union:

There is clearly a wage gap, but differences in the life choices of men and women – such as women tending to leave the workforce when they have children – make it difficult to make simple comparisons.

Obama is using a figure (annual wages, from the Census Bureau) that makes the disparity appear the greatest. The Bureau of Labor Statistics, for instance, shows that the gap is 19 cents when looking at weekly wages. The gap is even smaller when you look at hourly wages – it is 14 cents – but then not every wage earner is paid on an hourly basis, so that statistic excludes salaried workers.

In other words, since women in general work fewer hours than men in a year, the statistics used by the White House may be less reliable for examining the key focus of legislation pending in Congress – wage discrimination. The weekly wage is more of an apples-to-apples comparison, but it does not include as many income categories.

Economists at the Federal Reserve Bank of St. Louis surveyed economic literature and concluded that "research suggests that the actual gender wage gap (when female workers are compared with male workers who have similar characteristics) is much lower than the raw wage gap." They cited one survey, prepared for the Labor Department, which concluded that when such differences are accounted for, much of the hourly wage gap dwindled, to about 5 cents on the dollar.