Amid Slanted Gay Marriage Coverage, NBC Wonders: 'Will the Justices Make it Legal in Every State?'

At the top of Tuesday's NBC Today, co-host Savannah Guthrie seemed to get swept up in the network's own one-sided reporting on the gay marriage cases before the Supreme Court, proclaiming: "Supreme decision. This nation's highest court taking up the divisive issue of same-sex marriage this morning. Will the justices make it legal in every state?"

In the report that followed, justice correspondent Pete Williams touted the anticipation of gay marriage supporters: "The day has finally come for the people who've lined up for days to see the historic argument....The two California couples at the heart of today's case are already here after a brief visit Monday to see the Constitution at the National Archives. Their lawyer says Prop 8 should be struck down because allowing them to get married would have no effect on traditional couples." 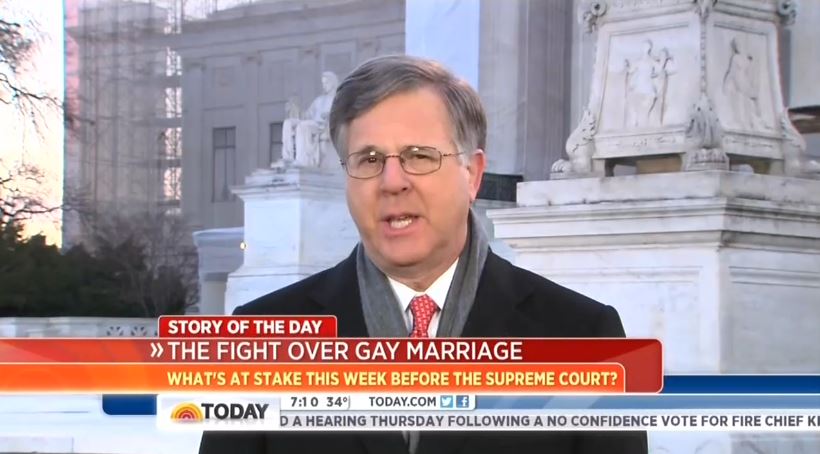 Let me give you what I think the bottom line is. Number one, it's quite obvious the U.S. Supreme Court is not prepared to issue any kind of sweeping ruling about gay rights. No member of the Court seemed to be very interested in that. Secondly, the Supreme Court, both liberals and conservatives, seems to be worried about writing a decision that will apply to any state outside California. Now, the proponents for the four gay couples that brought this case are really urging the Supreme Court to say that marriage is such a fundamental right that no state can constitutionally deny same-sex couples the right to marry. There seemed to be very little eagerness from any members of the Court to embrace that broad a ruling.

In the twenty-four-hour period prior to the arguments, Williams offered three full reports on the upcoming gay marriage decision, totaling eight minutes. However, only fifty seconds of that coverage featured the perspective of traditional marriage supporters.

On Monday's Nightly News, anchor Brian Williams promoted how "public attitudes have been shifting fast" on the issue, with Pete Williams declaring: "Public opinion polls show that more than half of Americans now say they support it. That's why supporters of marriage for gay couples claim the cultural tide is moving in their direction."

A sound bite followed of SCOTUS Blog's Tom Goldstein arguing: "If the Supreme Court disagrees with these claims, history will not look fondly on it."

Speaking of the Prop 8 case on Monday's Today, Williams sympathetically observed: "For the five people at the heart of this case, it's simple, they just want to get married. Kristin Perry and Sandy Stier have been a couple for 13 years, living in Berkeley, California. They've raised four boys, now ages 18 to 24. What they most want to be is married."

Speaking of the Defense of Marriage Act case at the end of the report, Williams noted that "President Obama concluded the law is unconstitutional" while "House Republicans entered the case to defend DOMA." No sound bite was actually played of the House GOP.

Williams then seized on a comment from Republican strategist Karl Rove to further bolster the pro-gay-marriage side: "This case comes to the Court in a very different political climate than just four years ago, when Prop 8 became law. An example of that, just yesterday, Republican adviser Karl Rove said in the next presidential election he could see one of the Republican candidates favoring same-sex marriage."

In all three reports, Williams also made sure to highlight the lesbian cousin of Chief Justice John Roberts being present at the oral arguments and touting how "In a guest column for a gay rights group...she wrote, quote, 'Everyone in this country has a family member,' end quote, who is part of the gay and lesbian community."

ABC's Good Morning America on Tuesday was equally lopsided in its coverage of the topic.

During a recent gay rights fundraiser in New York, former MSNBC anchor Contessa Brewer summed up the media attitude on gay marriage, and specifically on those who oppose it: "When we're talking about racism, nobody ever says, 'Do you think there's fair coverage for racists?'"

Here is a full transcript of the March 26 Today report from Williams: 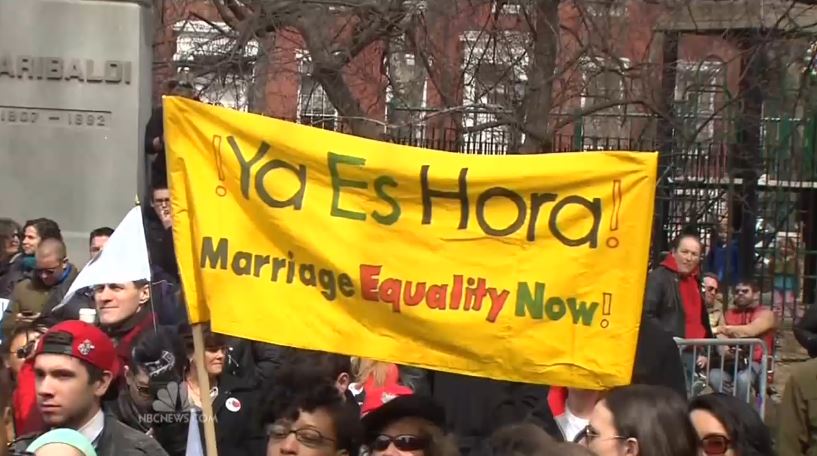 SAVANNAH GUTHRIE: Supreme decision. This nation's highest court taking up the divisive issue of same-sex marriage this morning. Will the justices make it legal in every state?

MATT LAUER: The U.S. Supreme Court hears a landmark case today that could drastically change how the government handles the controversial issue of same-sex marriage. NBC's justice correspondent Pete Williams is at the court. Pete, good morning to you.

[ON-SCREEN HEADLINE: Story of the Day; The Fight Over Gay Marriage; What's at Stake This Week Before the Supreme Court?]

PETE WILLIAMS: Matt, good morning. Californians who gave Barack Obama 61% of the vote in 2008 also approved Proposition 8, a ban on same-sex marriage in that state. Now the Court will consider whether that's unconstitutional discrimination, and more broadly, whether any state can ban it. The day has finally come for the people who've lined up for days to see the historic argument.

UNIDENTIFIED MAN: I've been out here for four days and the reason I'm out here is just because it's such an historic moment, it's only going to happen once in my lifetime and I wanted to be here to witness history.

WILLIAMS: The two California couples at the heart of today's case are already here after a brief visit Monday to see the Constitution at the National Archives. Their lawyer says Prop 8 should be struck down because allowing them to get married would have no effect on traditional couples.

TED BOUTROUS [LAWYER FOR GAY COUPLES]: The proponents of Proposition 8 still haven't been able to come up with an argument as to why for all the good things about marriage, we need to keep people out who want to get married.

WILLIAMS: If the court strikes Prop 8 down, same-sex marriage would resume in California. And depending on how broadly the Court ruled, it could also require some or even all other states to allow same-sex marriage, too. But if the Court upholds Prop 8, that would leave the door open for another election in California on whether to get rid of it.

A guest of Chief Justice John Roberts will be watching today's argument with special interest. His cousin from San Francisco, Jean Podrasky, who says she's a lesbian hoping to get married. During his 2005 confirmation hearing, Roberts introduced her along with other family members.

JOHN ROBERTS: And representing the cousins, my cousin Jean Podrasky.

WILLIAMS: In a guest column for a gay rights group, that's her on the left in the picture, she wrote, quote, "Everyone in this country has a family member," end quote, who is part of the gay and lesbian community.

And tomorrow, the Court takes up the Defense of Marriage Act, the federal law that blocks the federal government from recognizing same-sex marriages in the nine states where they are allowed. We'll probably get decisions in both cases toward the end of June, Matt.

LAUER: Alright, Pete Williams at the court this morning. Pete, thank you very much.